Where to Buy Columbus Crew Tickets

Primary market single-game tickets to Major League Soccer’s Columbus Crew are on sale via Ticketmaster. The team also has season tickets and partial plans available ahead of the March 1 season opener against NYCFC at MAPRE Stadium in Columbus.

On the secondary market, TicketIQ has a Low Price Guarantee on sold out Columbus Crew tickets for all games on their 2020 schedule, in addition to Low Price Guarantees on all MLS tickets. That means that if you find a secondary market ticket for less on a site like StubHub or Vivid Seats, we’ll give you 200% of the difference in ticket credit.  In our efforts to continue to provide our customers with the best deals, we’ve removed all fees.TicketIQ now shows you the full ticket price from the start of your search. TicketIQ customers save an average of 5%-20% compared to StubHub and Vivid Seats.

How Much Are Columbus Crew Tickets

On the primary market, seats remain for Sunday’s opener against NYCFC. The least expensive ticket on Ticketmaster is $25.71 for seats behind the net in the 100 Sections. 200-Level seats are $32.38 and the priciest seats are $65.21 in Section 126 at midfield. Tickets to most games start at $25.71, and there is good availability throughout MAPFRE Stadium for many games, though the August 22 game against FC Cincinnati is sold out.

On the secondary market, fans can get into the season opener for $28 for seats behind the net, and seats in the 100 Sections along the sidelines are available for $50 or less. Tickets to most games can be had for less than $30, with several exceptions, including the August 22 game against in-state rival Cincinnati. Tickets for that game start at $56 behind the net and at $104 at field level in Section 104, Row 6.

The overall average asking price for a Columbus Crew ticket on the secondary market is $42, making it one of the best deals in MLS. It is tied with FC Dallas as the eighth cheapest ticket in the league. The priciest is $111 for an LAFC game. Historically speaking, this year’s average asking price is the sixth cheapest since 2011, when TicketIQ began tracking data. The highest average was $78 in 2015. 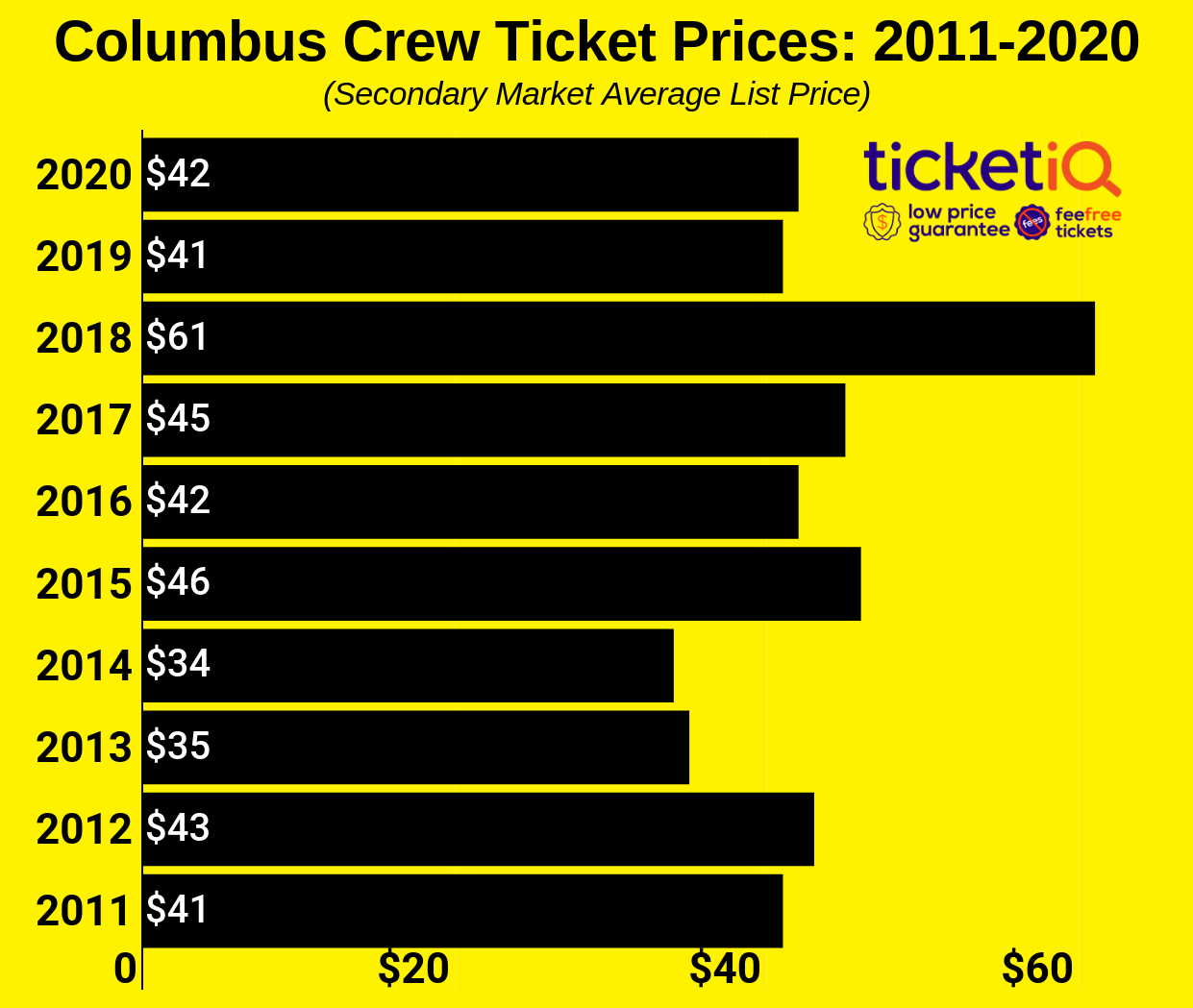 Season tickets can be ordered via Ticketmaster and start at an average of $23 per game for new memberships and $19 for renewals. The most exclusive seats are in the Scotts Field Level sections, which are on the pitch and include a pre-match buffet and beverage service. There is a waiting list for these sections. Season ticket holders get a discount over single-game tickets, seating priority, discounted parking rates and tickets to Crew-hosted U.S. Open Cup matches.

The Crew offers several partial plans, for four and 10 games. For either plan, fans can select their seats, which will be the same for all games, and then select the games they would like to attend. Prices vary depending on seat location. For both plans, the Crew is offering interest-free payment plans, and fans also get priority access to post-season games.

The Columbus Crew offers digital ticketing via the MLS app. Tickets can be bought, sold or transferred via the app. Fans can also access tickets for mobile entry via the app.