Where To Buy 2019 Seahawks Tickets

Single game tickets for each Seahawks home game are available through the Seahawks website and via primary partner Ticketmaster. Season tickets are not available, but the Blue Pride Notification List is available for those who are interested in season tickets in the future.

To manage your Seahawks and Ticketmaster accounts, the Seahawks have a mobile app available for iPhone and Android. The app can also be used for mobile entry into the venue.

On the secondary market TicketIQ has Low Price Guarantees on Seahawks tickets for all games on the 2019 schedule, in addition to Low Price Guarantees on all NFL tickets, which means that if you find a secondary market ticket for less on a site like StubHub or SeatGeek, we’ll give you 200% of the difference in ticket credit. TicketIQ customers save an average of 5%-20% compared to StubHub and SeatGeek.

Club options for the Seahawks include The Delta Sky360° Club, which is found on the 200 level of the stadium. Other club options include the Reserve Club and the Toyota Fan Deck.

How Much Are 2019 Seahawks Tickets

At a $390 average price for a ticket at CenturyLink Field, the Seahawks own the fourth-highest secondary market price in the NFL. That is just 2% less than last year's average. 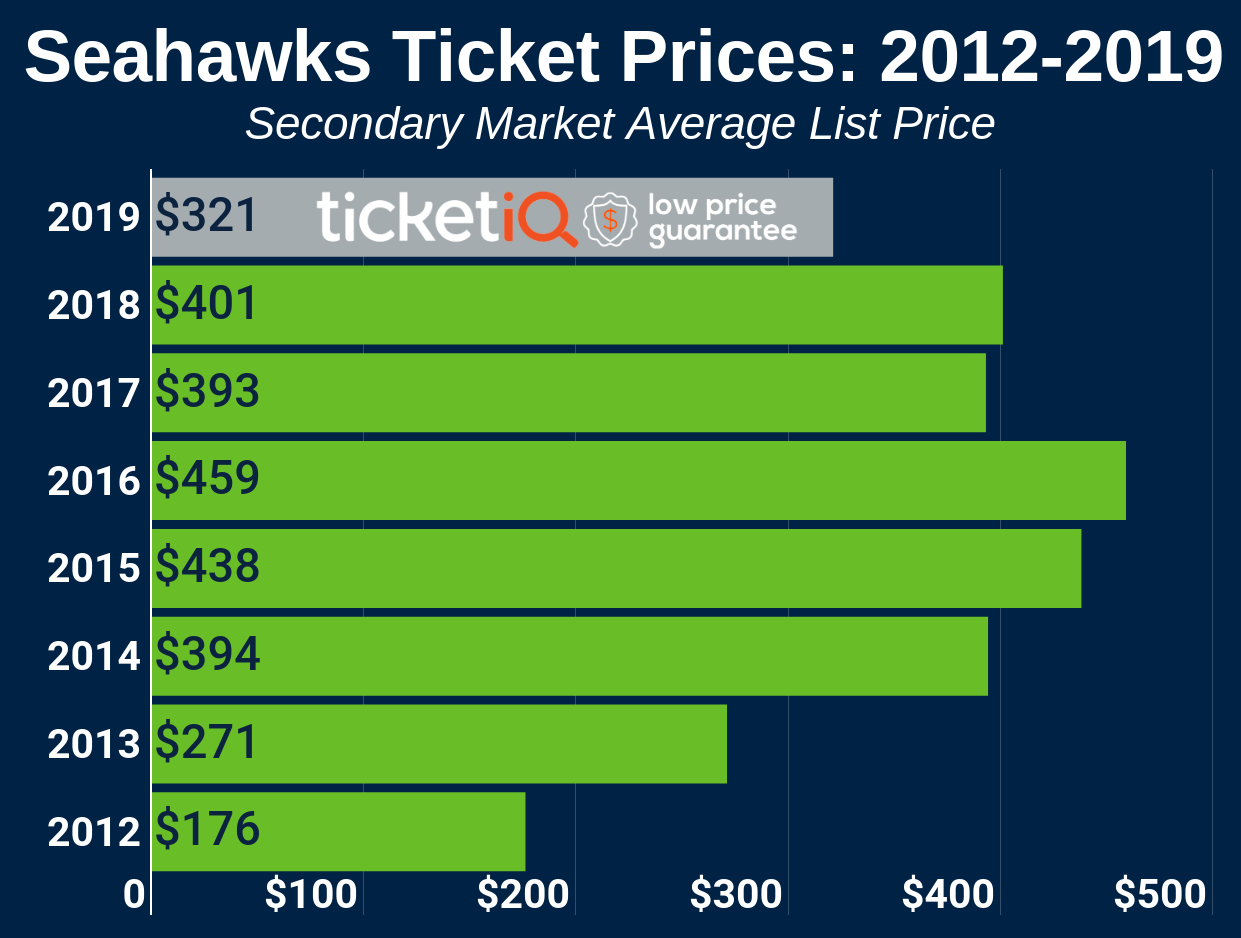 Prices For All Seahawks Home Games On The 2019 Schedule

The opening kickoff of the Seahawks’ season is against the Bengals. Cincinnati won, 34-12, the last time Seattle hosted Cincinnati in 2011. In the most recent meeting between the two squads, the 2015 Bengals moved to 5-0 in a 27-24 overtime victory over the Seahawks.

The most expensive home contest of the season for the Seahawks is against one of the NFL’s best in the New Orleans Saints. Drew Brees and Sean Payton enter CenturyLink Field for the first time since 2016, when they defeated Seattle, 25-20, behind a defensive touchdown and four Wil Lutz field goals.

The Seahawks and Rams were two of the best home squads during the 2018 season. Unfortunately for Seattle, Los Angeles currently has a three-game winning streak against Russell Wilson and company. The Seahawks lost even when scoring 31 points in each of the last two contests against the Rams.

Both the Seahawks and Ravens posted 6-2 home records and 4-4 road records last season. In 2018, Seattle was a top offense and Baltimore was a top defense. The Seahawks have won the last three meetings, including 2015’s 35-6 win when Russell Wilson threw for five touchdowns.

The only November contest at CenturyLink Field is Week 9’s contest against the Buccaneers, who the Seahawks have had trouble against recently. Russell Wilson was held to 151 yards and was intercepted twice in their last meeting, a 14-5 Seattle loss on November 27, 2016.

The Seahawks have won each of the last five meetings, including 2018’s regular season contest and 2016’s wild card round game. Last year, Chris Carson scored Seattle’s only offensive touchdown in the Seahawks’ 21-7 win.

The contest with the lowest-priced home Seahawks ticket is against the division foe Cardinals. Last year, Seattle swept the season series from Arizona. The Cardinals had the worst offense in the league in 2018, but did score 41 points combined in the two meetings.

The Seahawks have won the last 10 meetings against the 49ers that have finished in regulation. However, the most recent meeting was a 26-23 San Francisco victory that was won by Robbie Gould’s 36-yard field goal with 3:06 remaining in the overtime period.

For sold out seats, TicketIQ has Low Price Guarantees on all events at CenturyLink Field for the Seattle Seahawks, Seattle Sounders, as well as Concerts. That means that if you find a secondary market ticket for less on a site like StubHub or Vivid Seats, we’ll give you 200% of the difference in ticket credit. TicketIQ customers save up to 25% compared to other secondary sites. TicketIQ also provides access to unsold face-value tickets for all events at CenturyLink Field via Ticketmaster.

Lower Level End Zones at CenturyLink Field consists of seats, located close to the action on the field and offer views from the end zones and corners of the stadium. Rows in these sections ranges from A to Z. They are found in Sections 100 to 104, 114 to 130, and 140 to 151. Lower lower Sidelines range from Sections 105, 113, 131, and 139. The sedeline sections have rows consisting from K to Z.

The Toyota Fan Deck, located in the upper rows of sections 320 and 324 on the south end of CenturyLink Field.

Wells Fargo Club is located above the 100 Level and offer views from the sidelines and midfield of the stadium. They are found in Sections 205 to 213 and 231 to 239. Loge seats are located between the Upper Level and Suite Levels and offer views of the game from four different areas of the stadium: end zones, corners, sidelines, and charter. Bleacher Seating seats are located in the visitor's end zones in Sections 320 to 324. Delta Sky360 Club seats are located on the Club Level between the 200 and 300 Levels of the stadium and offer premium views of the game from a variety of angles. Club members are provided with luxury amenities, such as lounge and Club Loft access, theater seating, and concierge service. Brotherton Reserve Club is located on the Club Level and offer excellent sightlines of the game. Red Zone Suites are located in the Seahawks' endzone between the Hawks' Nest and 100 Level. They are found in Suites Sections 1 to 12. Single-Game Suites are located above the Club Level in Suites 6, 42, 44, 45, and 46. Suiteholders are provided with luxury amenities, such as premium seating and in-suite catering. Suites can seat between 18 to 50 people.

WHERE CAN I FIND CHEAPEST TICKETS FOR CENTURYLINK FIELD

The Seattle Seahawks have unsold face-value tickets available for most games, which can be purchased directly through Ticketmaster. Prices may be above or below prices on the secondary ticket market. Many Concerts also have unsold tickets. For Sold Out Seats and Events, TicketIQ has Low Price Guarantees on all events at CenturyLink Field. That means that if you find a secondary market ticket for less on a site like StubHub or Vivid Seats, we’ll give you 200% of the difference in ticket credit. TicketIQ customers save up to 25%.

All fans can view, transfer, or sell mobile tickets through Seahawks Account Manager. Be sure to log into your account on the Seahawks Mobile App for convenient access to your tickets on gameday. You can also purchase or manage tickets online through Ticketmaster.

CenturyLink Field offers other convenient services including wheelchair assistance, lost and found and wheelchair check in. For guests who wish to transfer to a seat from their wheelchair, Capital One Arena will store the wheelchair at Guest Services on the 100 and 300 levels.