Where To Buy 2019 Virginia Football Tickets

Primary market tickets for Cavaliers home games are available through the UVA website via primary partner Paciolan. There are multiple choices of season ticket packages available, which start at $129 for the general public and $103 for young alumni. The two most expensive season-ticket options called Prime ($340) and Priority ($375) and also require a $100 donation. Single-game tickets are currently available for the games against William and Mary, Florida State and Old Dominion, with the onsale for other games planned throughout July and August. Face value pricing starts at $15 and goes up to $60 for the Virginia Tech game. For the Virginia Tech game, tickets are only available with a $100 or more to the Virginia Athletics Foundation, or to fans who were 2018 season ticket holders. UVA also has one 3-game mini-plan available with the option for all games other than the Virginia Tech game, with prices from $60 to $165.

On the secondary market TicketIQ has Low Price Guarantees on UVA football tickets for all games on the 2019 schedule, in addition to Low Price Guarantees on all college football tickets, which means that if you find a secondary market ticket for less on a site like StubHub or SeatGeek, we’ll give you 200% of the difference in ticket credit. TicketIQ customers save an average of 5%-20% compared to StubHub and SeatGeek.

How Much Are 2019 Virginia Football Tickets

In 2018, the Cavaliers were able to make it up to No. 23, their best AP ranking since 2007. It was also the first time Bronco Mendenhall made it into the top 25 as the UVA head coach.

Tickets for UVA home games are averaging $68 per ticket on the secondary market. Virginia’s 8-5 record last year was its best one since 2011, and the Cavaliers finished 2018 with a 28-0 victory over South Carolina in the Belk Bowl. 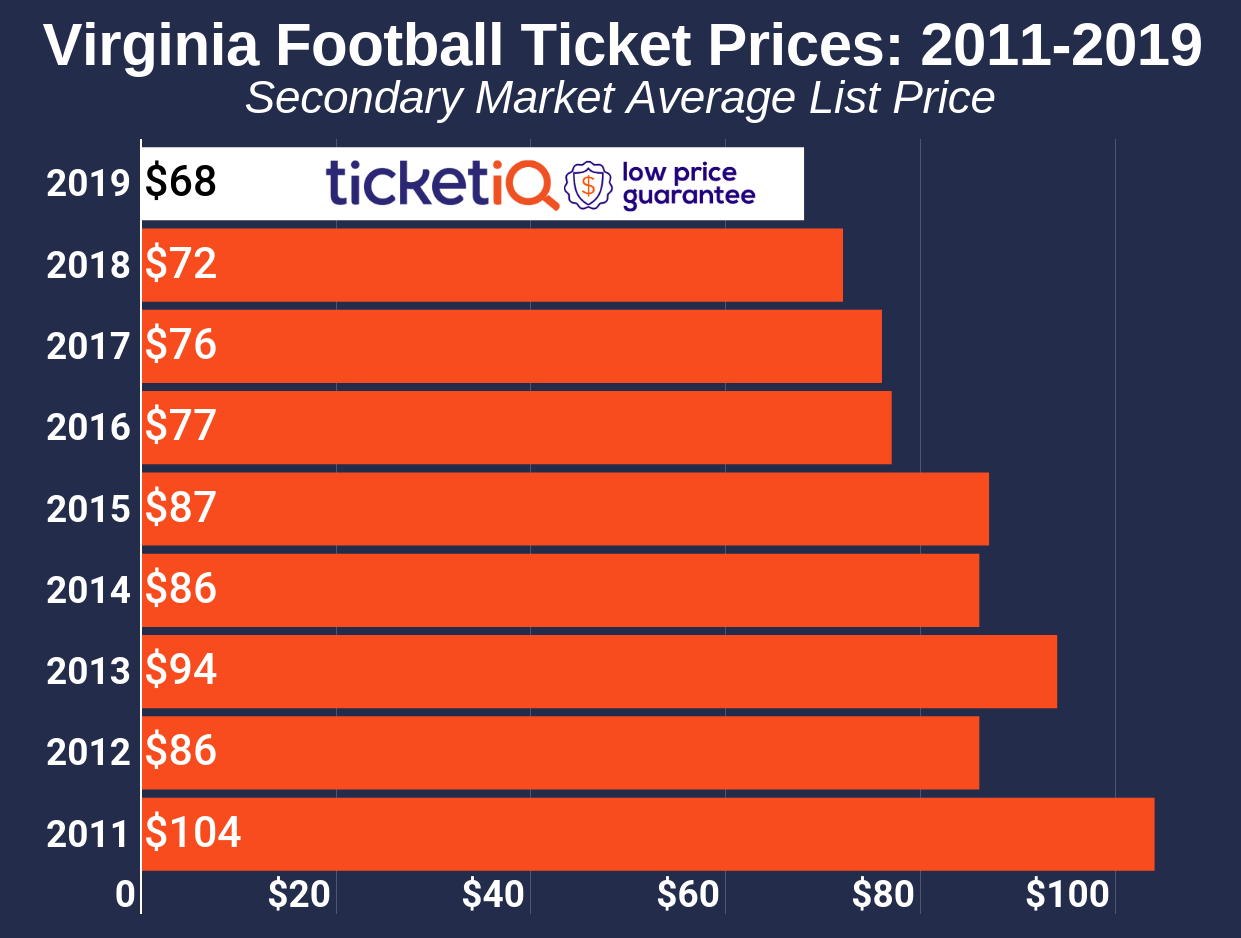 Ticket Prices For All Virginia  Home Games On The 2019 Schedule

September 6 vs. William and Mary Tribe

Virginia has played well recently against William and Mary, as UVA has won the last three meetings, including the most recent one, 28-10, in 2017.

For the first time 2010, the Cavaliers will host the Seminoles. Florida State has won three of the last four meetings against UVA.

The least expensive contest this season at Scott Stadium in Charlottesville is when the Cavaliers face the Monarchs for the first time in football history.

Virginia has had Duke’s number since 2015, as UVA has a four-game winning streak. Last season, the Cavaliers defeated the Blue Devils in Durham, 28-14.

The home team has won the five most recent meetings between the Cavaliers and Yellow Jackets. When UVA last hosted Georgia Tech, the Cavs put up 40 points.

Virginia faced Liberty for the first time last season and was victorious, 45-24. UVA hopes that a victory in this contest gets the Cavaliers ready for their game against Virginia Tech the following week.

UVA’s most expensive home game of the season is their season finale against rival Virginia Tech. Virginia scored 31 points last season at Virginia Tech, but the Cavs dropped their 15th consecutive contest against the Hokies.