Where to Buy Michigan Tickets

In order to be eligible to purchase Michigan football season tickets, you need to join the season ticket interest list by the April 2020 deadline; once on the list, a contribution of at least $150 will get you priority purchasing access. For the 2019 season, there were 877 new donations and 83% of them had the chance to purchase a ticket plan. Beyond that, the school also offers smaller ticket packs, but they are already sold out for the season. Regardless of your plan, however, you’ll have the option of physical or print-at-home tickets.

If you’re looking to make your game day a little more luxurious, Michigan also offers three premium seating locations. The Jack Roth Stadium Club offers both outdoor seats (ranging from a $1700 contribution to $3420) and indoor seats (with a minimum contribution of $4000) and access to a climate controlled club area with TVs and premium concessions. Westside chairbacks let you sit in the old press box in more comfortable seats for a contribution between $1400 and $2320 while Michigan Stadium Suites provide the opportunity to book a box for up to 20 fans.

Single game tickets were released earlier in the summer via Paciolan but, as it currently stands, they are only available for the home opener against Middle Tennessee State. Even for that game, only scattered single tickets are available, with a limit of four per customer.

On the secondary market TicketIQ has Low Price Guarantees on Michigan football tickets for all sold out games on the 2019 schedule, in addition to Low Price Guarantees on all college football tickets, which means that if you find a secondary market ticket for less on a site like Stubhub or Seatgeek, we’ll give you 200% of the difference in ticket credit. TicketIQ customers save an average of 5%-20% compared to Stubhub and Seatgeek.

How Much Are Michigan Wolverines Football Tickets

Looking at Michigan’s schedule, there are two distinct segments. The Wolverines open their home program with four games against lesser opponents; those are all comparatively affordable, with the most affordable being the home opener against Middle Tennessee State ($29), but prices rise as the season goes on. After that, the big boys come to town and prices spike all the way to a $209 peak against Ohio State. That split define your ticket buying. Would you would rather spend less money or see a better game at nearly five times the cost?

No matter which game you choose, however, there are deals to be had on the secondary market. In the first half of the year, you can get into the Big House for as low as $29; towards the end of the season, you’ll be paying more but the get-in price for the bigger games is less than half of the average resale price. They're always savings to be had if you shop intelligently.

Overall, secondary market tickets at Michigan Stadium are averaging $285 for the 2019 season, the highest for the Wolverines this decade and the 3rd most expensive in the nation. 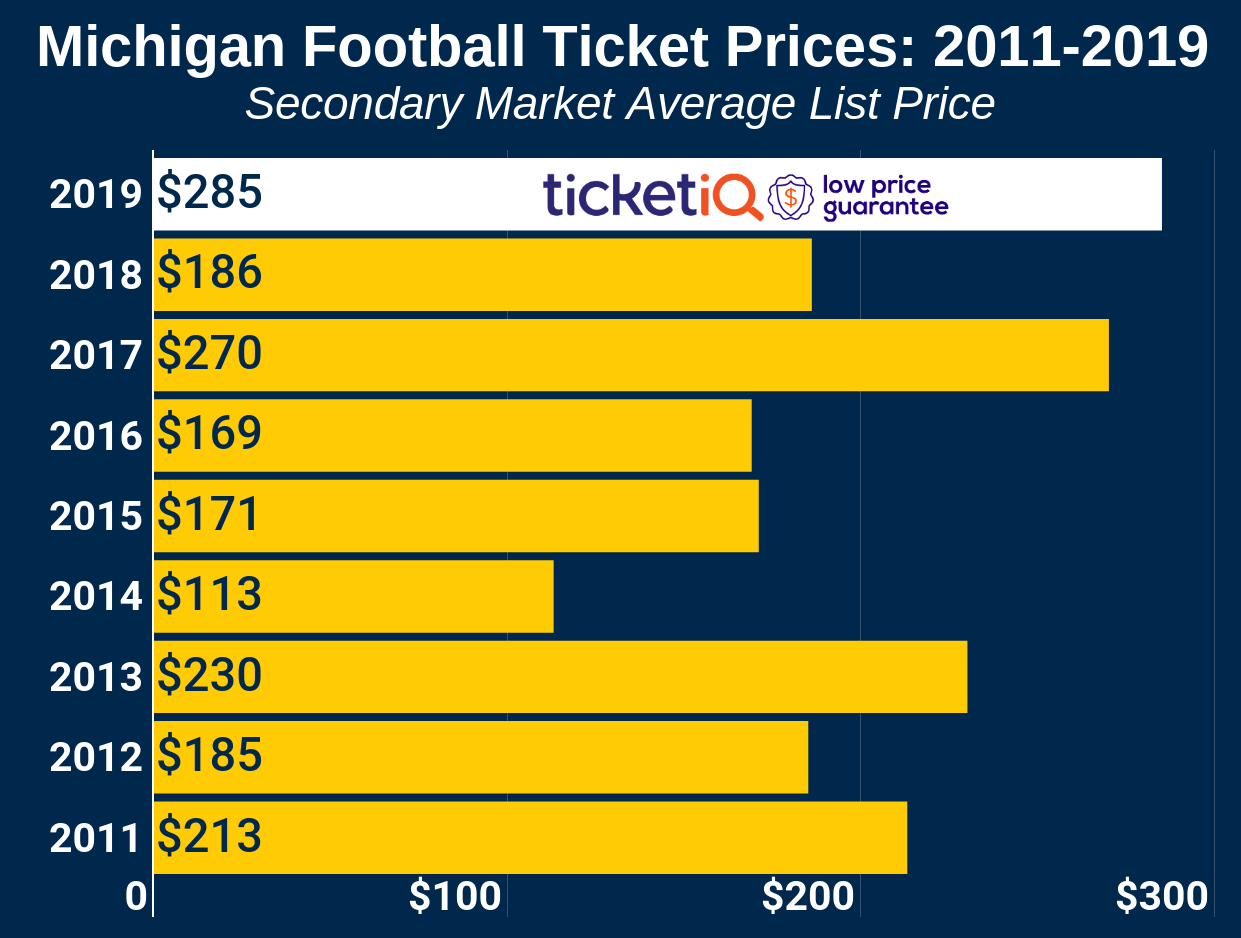 Prices for All Michigan Home Games On The 2019 Schedule

Last year, Middle Tennessee State played a couple of major programs; they narrowly lost to Kentucky, but were blown out by Georgia and Vanderbilt. Expect a result more like the latter here.

Army put together a strong season last year, finishing with an 11-2 record and a top 20 ranking in both the Coaches and AP Polls. Michigan should have enough talent to come out on top, but don’t expect the Black Knights to make it easy on them.

There’s a reason that Rutgers only won one game last season (which was against Texas State). They lost to Michigan 42-7 last season and just won’t have the horses to play with the Wolverines again this year.

Last season, Iowa boasted a prolific offense, but both their tight ends have gone pro. This game should be a shootout with the Hawkeyes’ personnel turnover giving Michigan an edge. Don’t assume an easy W though.

When two of college football’s blue bloods meet, you know it’s going to be a special game. The Fighting Irish have won the last two showdowns between the programs—with one of those being a 31-0 thumping—so Michigan will be out for revenge in a major way.

With the Paul Bunyan Trophy and state bragging rights on the line, you know both schools will give this game all they’ve got. Michigan should have enough to get across the finish line but, in a rivalry game, anything can happen.

Michigan closes out their home schedule with arguably the biggest game in all of college football. The Buckeyes have dominated the series in recent years, winning seven straight meetings; can they keep that streak going or can the Wolverines use home field advantage to turn the tide? Either way, make sure to circle this date on the calendar.

For Sold Out Seats and Events, TicketIQ has Low Price Guarantees on all events at Michigan Stadium for the Michigan Wolverines football as well as Concerts. That means that if you find a secondary market ticket for less on a site like StubHub or Vivid Seats, we’ll give you 200% of the difference in ticket credit. TicketIQ customers save up to 25% compared to other secondary sites. TicketIQ also provides access to unsold face-value tickets for all events at Michigan Stadium via Ticketmaster.

There are ten entrances to Michigan Stadium numbered Gates 1 to 10.

Jack Roth Stadium Club is located above the 10 Level on both the 300 and 400 Levels and offer views from the visitors' sideline of the stadium. They are found in Sections 301 to 317 and 401 to 419. These sections are very small, with only 5-8 rows per section. Club seating are provided with luxury amenities, such as private restrooms, lounge access, flat screen TVs, and concessions. West Side Chair-backs are located below the suite levels and offer views from Michigan's sideline. They provide the extra comfort of having backs to the chairs.

The suite level at Michigan Stadium is located on both the east and west sidelines on the 400 and 500 Levels. Suite-holders are provided with luxury amenities. The Michigan Stadium Student Section is located in sections 25-33R. Visiting Team Fan Sections are found in the upper tier of the South End-zone between sections 9-15.

WHERE CAN I FIND CHEAPEST TICKETS FOR MICHIGAN STADIUM

The Michigan Wolverines have unsold face-value tickets available for most games, which can be purchased directly through Ticketmaster. Prices may be above or below prices on the secondary ticket market. Many Concerts also have unsold tickets. For Sold Out Seats and Events, TicketIQ has Low Price Guarantees on all events at Michigan Stadium. That means that if you find a secondary market ticket for less on a site like StubHub or Vivid Seats, we’ll give you 200% of the difference in ticket credit. TicketIQ customers save up to 25%.

The only authorized sources for tickets to Michigan Athletic events are:

Tickets to all sports are bar-coded and will be scanned for validity at the venue entrance. Only mobile-only tickets are allowed at the center. For more information, contact;