Sorry! There are currently no tickets available for Atlanta United.

Single-game tickets and six-game packs on the primary market for Major League Soccer’s Atlanta United FC are currently on sale via Ticketmaster.

On the secondary market, TicketIQ offers fans a Low Price Guarantee on all sold out Atlanta United FC tickets, in addition to Low Price Guarantees on all Major League Soccer tickets. That means that if you find a secondary market ticket for less on a site like StubHub or Vivid, we’ll give you 200% of the difference in ticket credit. TicketIQ customers save up to 25%.

How Much Are Atlanta United FC Tickets

On the primary market, the cheapest tickets to lower-interest games start at $22.  For the home opener against Cincinnati on March 7, primary market tickets start at $22 for seats on the 300 Level, which is the only level on which tickets are available. Among the higher-interest games, tickets to the May 3 matchup against Real Salt Lake start at $49, and go up to $266 for club seats in Section 110 at midfield.

On the secondary market, tickets to the March 7 season opener start at $31 for seats in Upper Corner 328, and seats are available throughout the stadium. Seven games have a cheapest ticket of about $60, including the May 3 game against Real Salt Lake. Fans can get into this game for $61 in Lower End Zone 120 on the field level. While Ticketmaster has primary market seats for this game exclusively on the 300 Level, TicketIQ has seats on the 200 and 100 Levels available. Club seats for this game start at $113 in Midfield Club 112, Row 31, and go up to $938 for seats in Row 1A in Midfield Club C126.

The average asking price for Atlanta United FC tickets is $87 on the secondary market, making this season the cheapest since the team’s inaugural season in 2017. The priciest average was $167 for the 2018 season when Atlanta United FC won the MLS Cup. 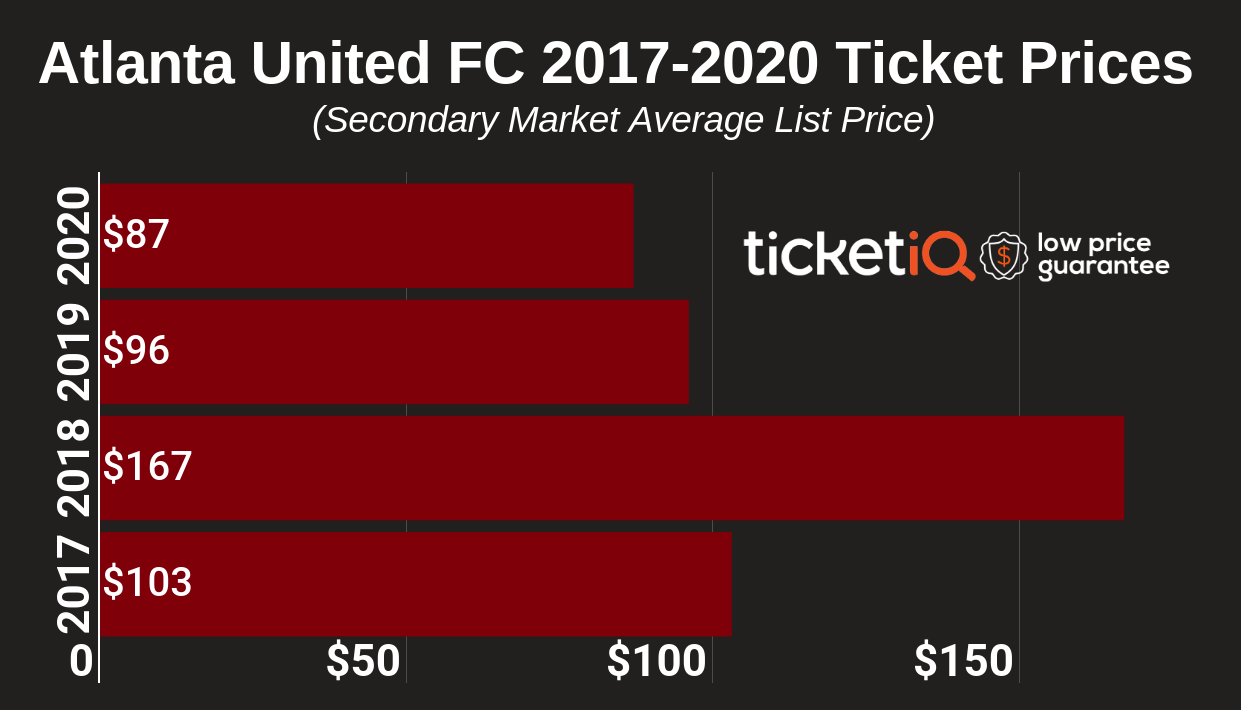 Season tickets are sold out, but fans can get on the waiting list for future seasons. The team plays home games at Mercedes-Benz Stadium.

The Multi-Game Ticket Pack starts at $180 in Upper Goal sections and goes up to $220 for Upper Sideline seats. Fans get tickets to six games, including the season opener, and a discount off of single-ticket prices.