Mini plans include 12 regular-season games plus one preseason game, and there are three options: The Weekend Plan, Rivalry Plan and Value Plan. Mini plan holders get discounts on suite rentals and merchandise as well as having access to pre-sale single-game seats.

The Enterprise Center offers a wide range of premium seating, including all-inclusive seats. These seats come with access to food and beverage, lounges, and other benefits. Another option is the “Loaded Value Ticket,” which comes with a seat and a predetermined amount of money loaded onto the ticket for use at food and beverage locations throughout the stadium. Loaded Value Tickets are available in some Glass Row sections or with access to the Bud Light Sports Pub.

Starting last season, the St. Louis Blues moved exclusively to mobile entry for home games. Fans can access their tickets via mobile devices, and the NHL app can be downloaded from the App Store or Google Play. The Blues provide instructions and a video on how to download and use the app.

On the secondary market TicketIQ has Low Price Guarantees on St. Louis Blues tickets for all games on the 2019-20 schedule, in addition to Low Price Guarantees on all NHL tickets.That means that if you find a secondary market ticket for less on a site like StubHub or SeatGeek, we’ll give you 200% of the difference in ticket credit. TicketIQ customers save an average of 5%-20% compared to StubHub and SeatGeek.

On the primary market there are two half-season packages, but only Center Ice Premier seats, starting at $3,776, and AECU Terrace tickets, starting at $4,259, are still available.

Standard admission single-game tickets are also available on the primary market for many games on the Blues schedule. Lower demand games start at between $35 and $50, while the tickets for higher demand (that aren't already sold out) start in the $65-$75 range.

The $125 average is the second highest of the decade, behind only the 2014-15 season, when fans pushed the average asking price up to $133. That was the last time the Blues won the Central Division. 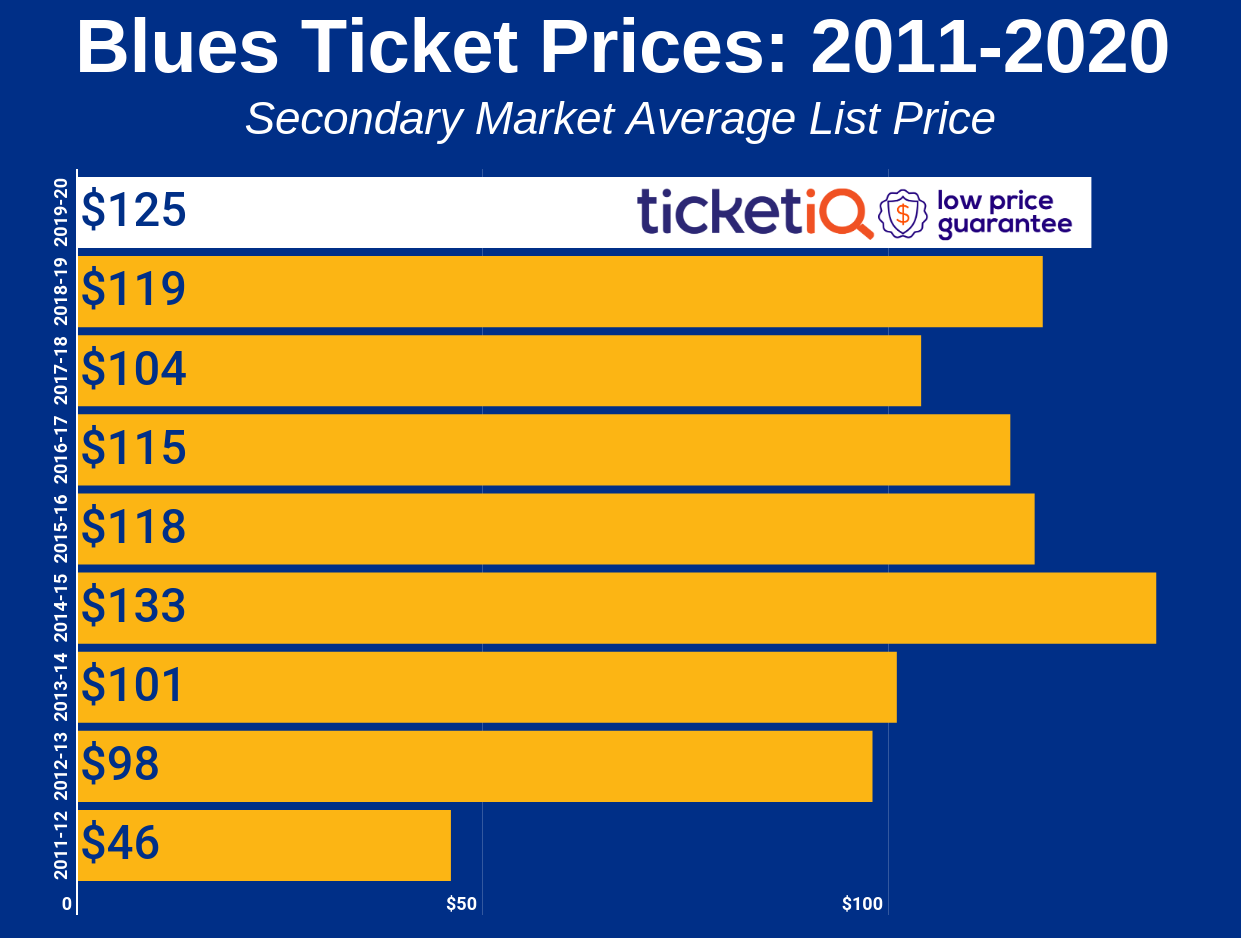 Only two Blues home games will cost fans $200 or more on the secondary market this season. The priciest by far is the October 2 season opener against the Washington Capitals. The Blues will raise their Stanley Cup Finals banner at the game, for which the average asking price is $566.

Three of the Top 10 priciest games are against the rival Dallas Stars, and the cheapest ticket for any of those game is trending at $72 for the October 5 matchup.

TicketIQ is committed to the cheapest tickets possible, and we make much less on sold out tickets compared to other major marketplaces like StubHub and Vivid. That means ticket buyers save from up to 25% on TicketIQ on sports, music and theater. We're able to do this because we also work with teams, venues, and other ticket owners, to help them sell tickets at face price, directly to consumers like you, through Ticketmaster and AXS. For an overview of the 2019 NHL Ticket Buying landscape, and details on the cheapest way to get tickets for every team, visit the TicketIQ Blog.