On the heels of winning the Stanley Cup, the St. Louis Blues will host the NHL All-Star game for the third time. The game is set for Saturday, January 25 at Enterprise Center, and is the highlight of a weekend of activities that will run from Friday, January 24-Sunday, January 26. The Blues previously hosted in 1970 and 1988.

Primary market tickets for the NHL All-Star game, set for Saturday, January 25 in St. Louis, are sold out on the primary market. Tickets to the skills contest are also sold out. Fans can purchase a weekend package that includes tickets to the game, pre-game hospitality, a ticket to the skills contest and entry into NHL Fan Fair via NHL Experiences starting at $1,299.

On the secondary market, TicketIQ has seats to the game starting at $242. TicketIQ offers a  Low Price Guarantee on all sold out NHL All-Star Game tickets, Skills Competition tickets and Weekend Package tickets, which means that if you find a secondary market ticket for less on a site like StubHub or Vivid Seats we’ll give you 200% of the difference in ticket credit. TicketIQ customers save an average of 5%-20% compared to StubHub and Vivid Seats.

How Much Are NHL All-Star Game Tickets

The average asking price for a ticket to the NHL All-Star Game at St. Louis’ Enterprise Center is trending at $682, which would make it the second priciest since 2011, when TicketIQ began tracking data. The priciest was $962 last year at San Jose’s SAP Center, and the cheapest was $307 at Nationwide Arena in Columbus, Ohio in 2015. The cheapest ticket on the secondary market is trending at $254 this year. 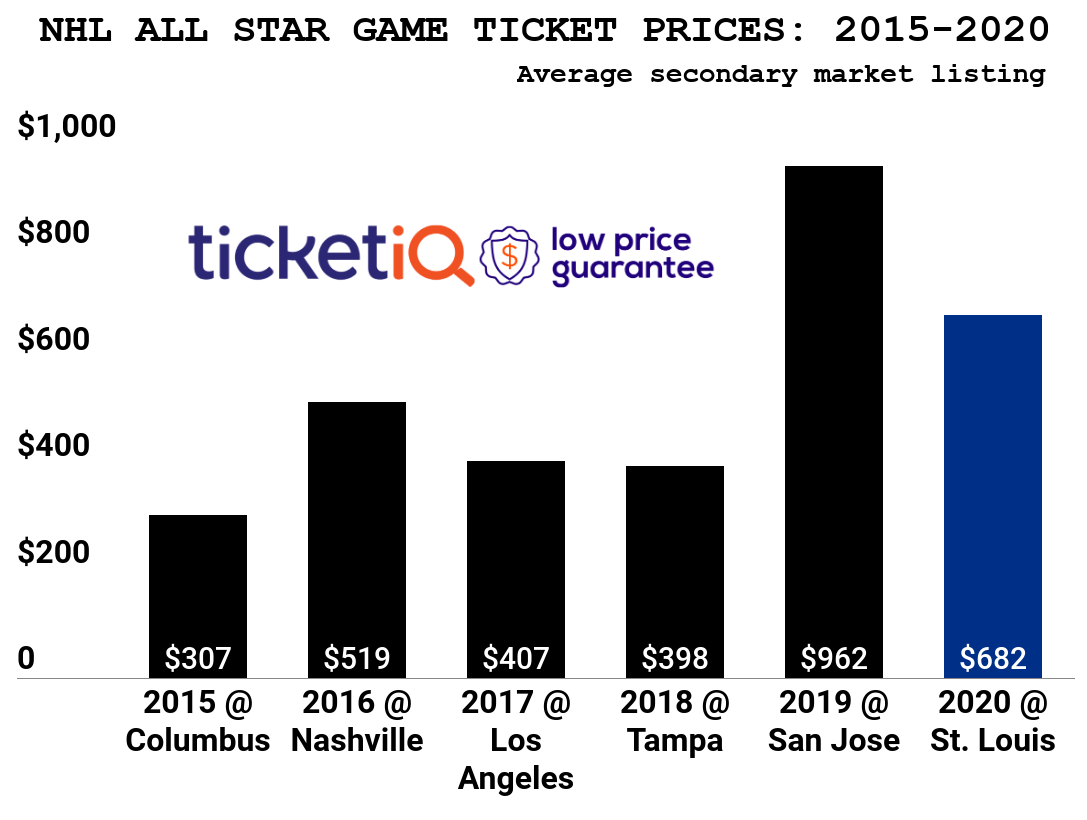 Secondary market tickets to the skills competition, which is set for Friday, January 24 at 7 p.m., start at $180 with the Low Price Guarantee. These seats are in Mezzanine 314, Row H on the corner. Club Seats remain in Sections Club 103, Row CC at center ice for $605 and in Club 126, Row EE near the net on the corner, for $653. Fans wanting to get closer to the action, could opt for seats along the glass, starting at $520 in Section Glass 118G, Row B at the penalty circles.