Sorry! There are currently no tickets available for Tennessee Titans.

Where To Buy 2019 Titans Tickets

Primary market tickets for Titans home games are available through Ticketmaster. There are also multiple choices of season ticket packages available, which start at $400, on the Titans website.

On the secondary market TicketIQ has Low Price Guarantees on Titans tickets for all games on the 2019 schedule, in addition to Low Price Guarantees on all NFL tickets, which means that if you find a secondary market ticket for less on a site like StubHub or Vivid Seats, we’ll give you 200% of the difference in ticket credit. TicketIQ customers save an average of 5%-20% compared to StubHub and Vivid Seats.

How Much Are 2019 Titans Tickets

For the third consecutive year, the Titans finished with a 9-7 record. However, Tennessee made the playoffs in just one of those three years: 2017. Last season, the main reason for missing the playoffs was going 0-3 combined against the Indianapolis Colts and Baltimore Ravens.

Tickets for Titans home games on the secondary market are averaging $207, which is the 22nd most in the NFL. The average ticket price has increased 18% over one year and 57% over five years. 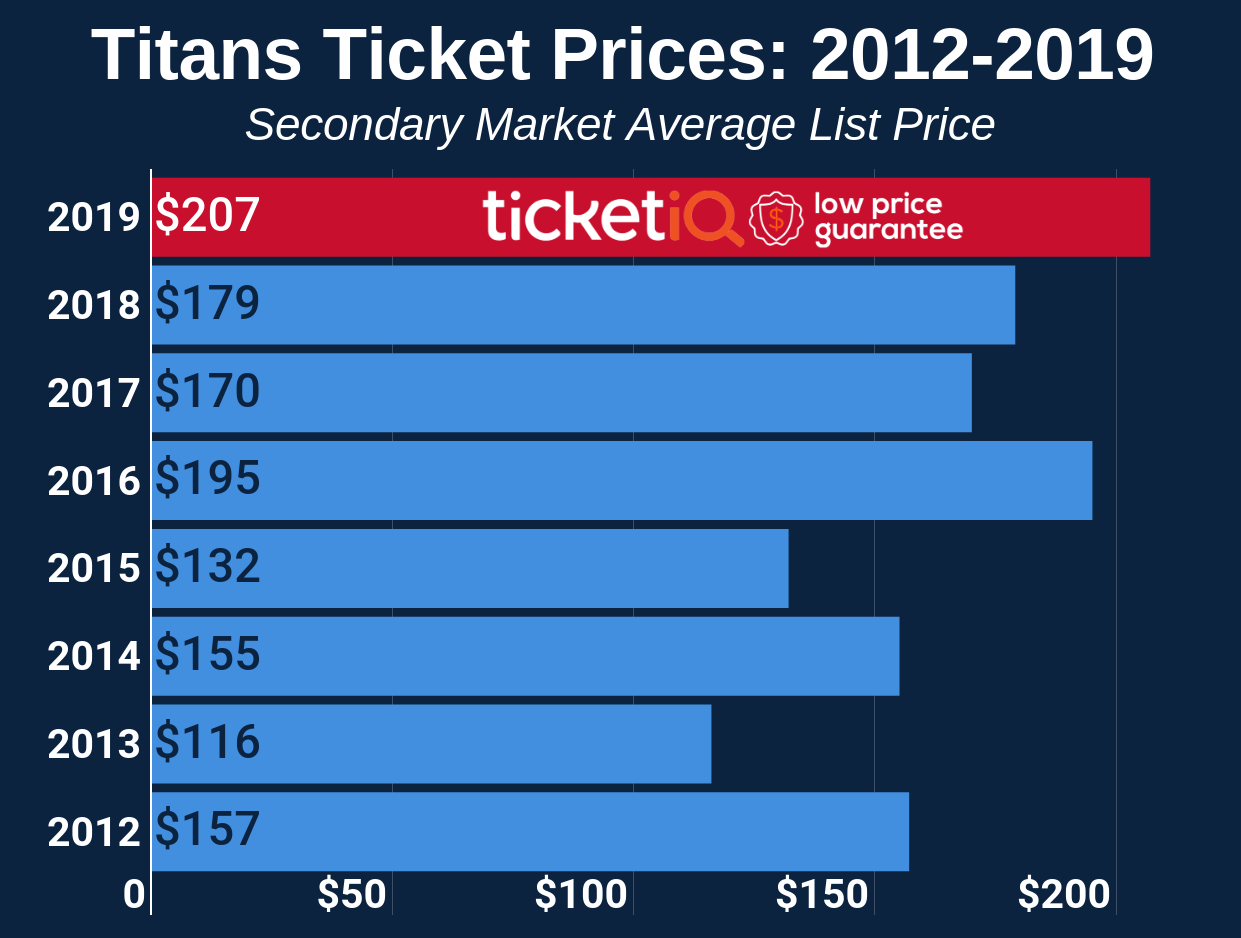 Ticket Prices For All Titans Home Games On The 2019 Schedule

Early in the season, the Titans will be looking for revenge after being blown out by the Colts twice last season. Tennessee will be hoping for results similar to 2017 when the Titans swept the series from Indianapolis. Unfortunately, recent history is on the Colts’ side: they have won 13 of the last 15 meetings against Tennessee.

The Titans take on the Bills for the second consecutive year. Last year at New Era Field in Orchard Park, New York, Marcus Mariota was unable to score a touchdown, as he went 14-for-26 for 129 yards in Tennessee’s 13-12 loss at Buffalo.

The Titans also face the Chargers for the second straight year. Just like with the meeting with the Bills in 2018, the Titans fell to the Chargers by one point. The 2018 meeting was played in London, and Philip Rivers went for 306 yards and two touchdowns in the victory. Dion Lewis led the Titans in rushing with 91 yards. Derrick Henry scored the only rushing touchdown in the 20-19 Titans loss.

The Titans have dominated the all-time series against the Buccaneers, and the most recent meeting came in 2015. Marcus Mariota had one of his highest-scoring performances on September 13, 2015 when the Titans scored five touchdowns, four which came from his arm, and won 42-14.

The most expensive game at Nissan Stadium this season is the contest against the best of the AFC West. The two teams last faced each other in the wild card round two postseasons ago. Mariota and Henry led the Titans to a 22-21 victory over Alex Smith and company. Nashville will get to see reigning NFL MVP Patrick Mahomes for the first time when the Chiefs head to Tennessee in November.

Surprisingly, the contest against the divisional rival Jaguars is the least expensive home contest for the Titans this season. The Titans have swept the season series each of the last two years. The most recent contest was a 30-9 blowout of Jacksonville at Nissan Stadium last December.

Although the Titans have not had that much success against the Texans over the past decade, Tennessee has won three of the last five meetings. The last contest between these two squads in Tennessee was won by Ryan Succop’s foot; he scored the last six points of the game. Succop, who agreed to a five-year contract extension with the Titans in 2018, is entering his sixth year with the team.

The explosive offensive unit from New Orleans heads to Tennessee for the Titans’ home season finale. When Tennessee last faced the Saints, Mariota won in New Orleans on a five-yard touchdown pass to Anthony Fasano, who last played with the Titans in 2016.

For sold out seats, TicketIQ has Low Price Guarantees on all events at Nissan Stadium for the Tennessee Titans, Nashville SC as well as Concerts. That means that if you find a secondary market ticket for less on a site like StubHub or Vivid Seats, we’ll give you 200% of the difference in ticket credit. TicketIQ customers save up to 25% compared to other secondary sites. TicketIQ also provides access to unsold face-value tickets for all events at Nissan Stadium via Ticketmaster.

Club Level seats are located above the 100 Level. Club level sections at Titans games contain 20 rows running from A-V. The Club Level includes some of the best seats in the house with sightlines on the 50-yard line. Loge Level seats are located in the first few rows of the Upper Level. LP Field Suites are located between the 200 and 300 Levels and offer views from the sidelines and corners of the stadium. Suiteholders are provided with VIP parking, private restrooms, catering, and lounge access. Party Suites can seat between 48 to 96 people and offer premium views of the game. Suiteholders are provided with in-suite catering, HDTVs, and comfortable seating.

WHERE CAN I FIND CHEAPEST TICKETS FOR NISSAN STADIUM

The Tennessee Titans has unsold face-value tickets available for most games, which can be purchased directly through Ticketmaster. Prices may be above or below prices on the secondary ticket market. Many Concerts also have unsold tickets. For Sold Out Seats and Events, TicketIQ has Low Price Guarantees on all events at Nissan Stadium. That means that if you find a secondary market ticket for less on a site like StubHub or Vivid Seats, we’ll give you 200% of the difference in ticket credit. TicketIQ customers save up to 25%.

Mobile tickets are accepted at all Nissan Stadium gates. If you purchased more than one ticket at the time of transaction, your entire party must enter the gate all together. Ticket Office personnel can assist guests who purchased through a valid source – Ticketmaster, NFL TicketExchange or the stadium's Ticket Office.

Nissan Stadium offers other convenient services including wheelchair assistance, lost and found and wheelchair check in. Nissan Stadium has a limited number of wheelchairs available for use during events. These can be obtained at the Fan Accommodations Booth in the South End Zone behind Section 123. You will be required to deposit your driver's license in order to use a wheelchair. Assistive Animals are permitted inside Nissan Stadium.