Sorry! There are currently no tickets available for Super Bowl.

How Much Are Super Bowl Tickets?


Miami is set to host its 11th Super Bowl when the San Francisco 49ers face the Kansas City Chiefs in Super Bowl LIV at the Hard Rock Stadium on Sunday, February 2. TicketIQ will cover everything you need to know about what’s going to be going on in Miami, from when to buy the cheapest tickets to getting there. This guide will help fans navigate their way to enjoying the biggest sporting event of the year.

For Fans that are looking for more affordable ticket options, you can read our blog posts about both NFL Super Bowl Experience and the 50+  music options for Super Bowl weekend all over the city, with something under $50 every night.

Prices: LIV Tickets are officially the most expensive Super Bowl we've tracked in 10 years. As a result of a new pricing model being used by the NFL, prices will most likely not be coming down leading up to the game. That means that now is the time to buy, as prices are not likely to decrease.

Ticket Pick-Up: We'll confirm the exact pick-up location in Miami after your purchase. The cardholder must be present to pick up the tickets and will be asked to provide a photo ID.

Have Fun: Choose from 50+ musical options for tonight, tomorrow and Sunday as well as NFL Super Bowl Experience, starting at $40 for the last day tomorrow.

Based on current prices on TicketIQ, you can save 10-20% on TicketIQ compared to StubHub and other secondary market vendors. TicketIQ also offers fans a Low Price Guarantee on all sold-out Super Bowl LIV tickets. That means that if you find the same secondary market ticket for less on a site like StubHub or Vivid, we’ll give you 200% of the difference in ticket credit. 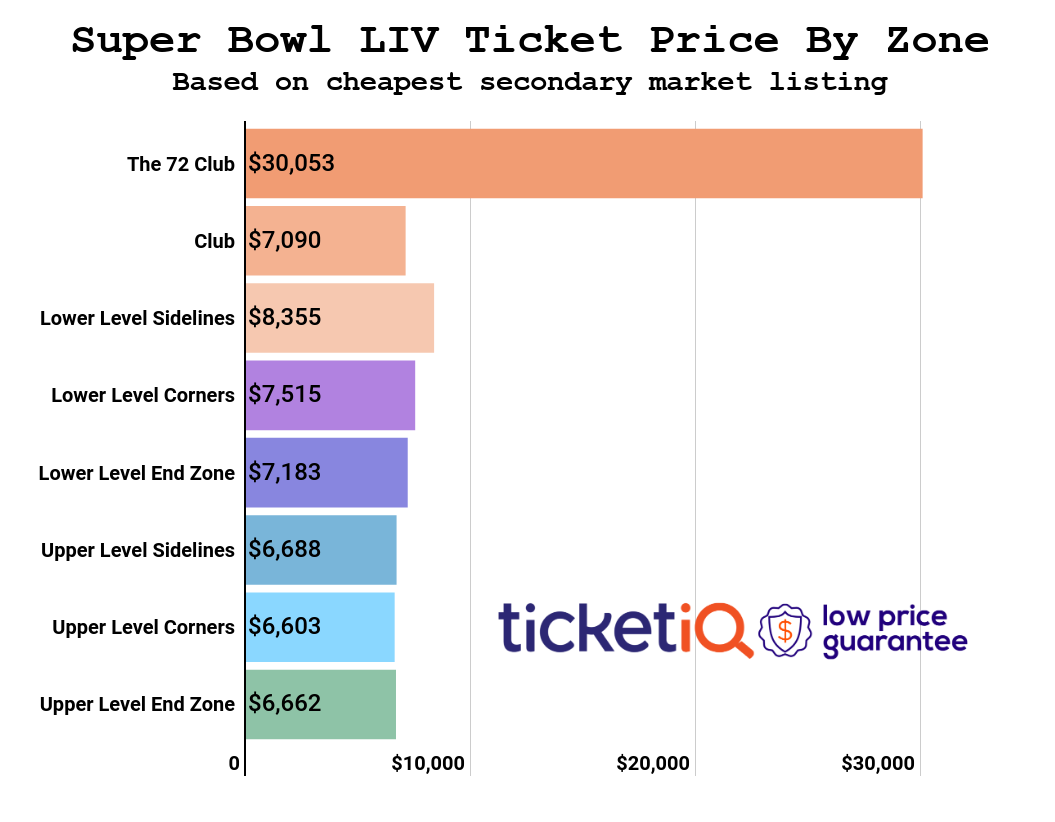 As for lower level tickets, on average, they have decreased by an average of 31% from championship Sunday. In the final week before the game, the average has gone down 9%. That all said, none of the previous games have had the level of demand and lack of weather issues like 2020. While Super Bowl 50 in New York was poised early on for $10k, week 2 weather concerns dampened demand.

We don't see any of those factors playing into the equation this year and we recommend buying sooner than later. 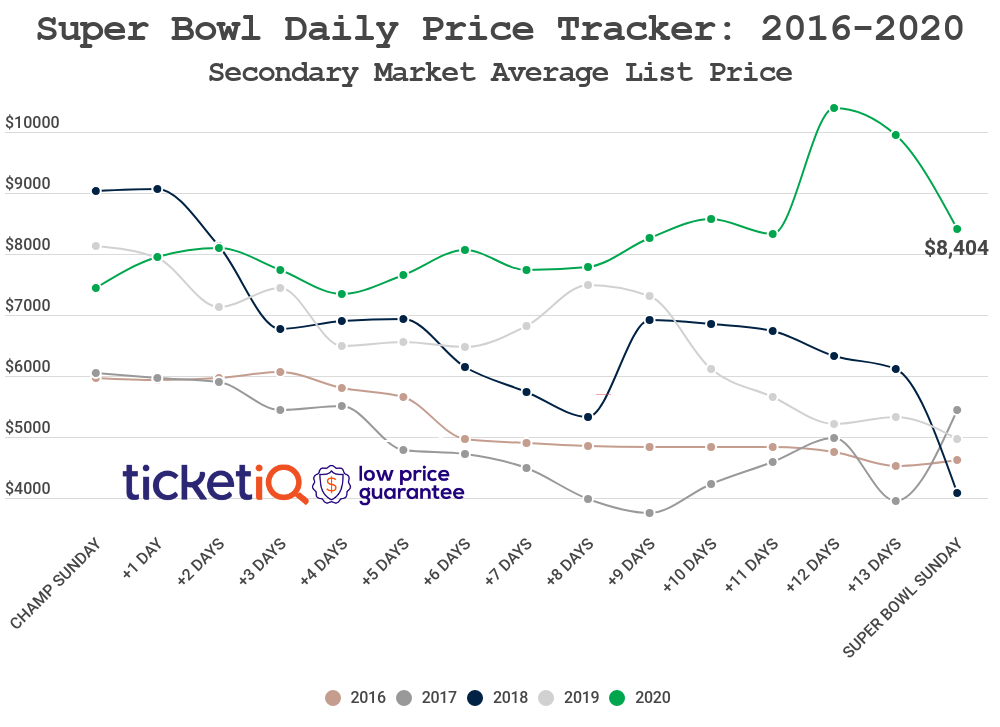 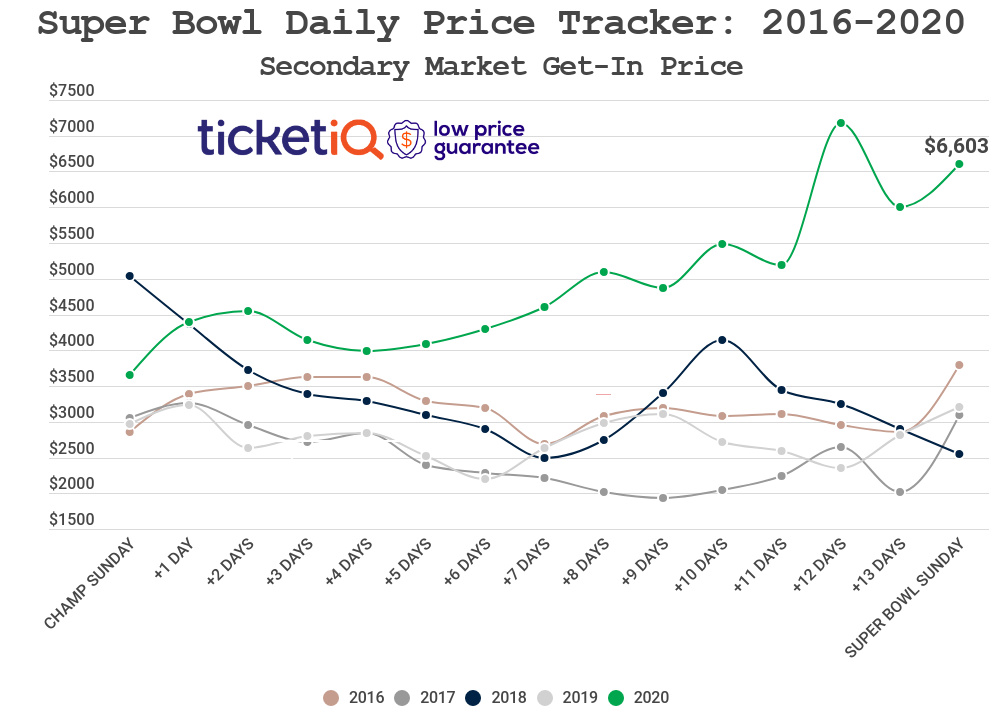 Below is a raw data format of the above the shows the best day to purchase the cheapest ticket over the last 10 years. As you can see, after the 2015 market blow-up, the approach to buying Super Bowl tickets has changed significantly.

Tickets for Super Bowl LIV are currently trending at $8,404 on the secondary market. If this price holds, it will be the second most expensive of the decade.. For last year’s game between the Los Angeles Rams and Patriots, the average asking price settled at $4,972, after reaching a high of $9,642 two weeks before the game. Traditionally, tickets on the secondary market have fallen to their lowest average asking price in the days immediately before the game and on game-day, though in 2017, there was a huge jump from $3,958 to $5,449 between one day out and game day.

For Super Bowl LIV, the cheapest ticket on the secondary market is trending at just over $6,600. 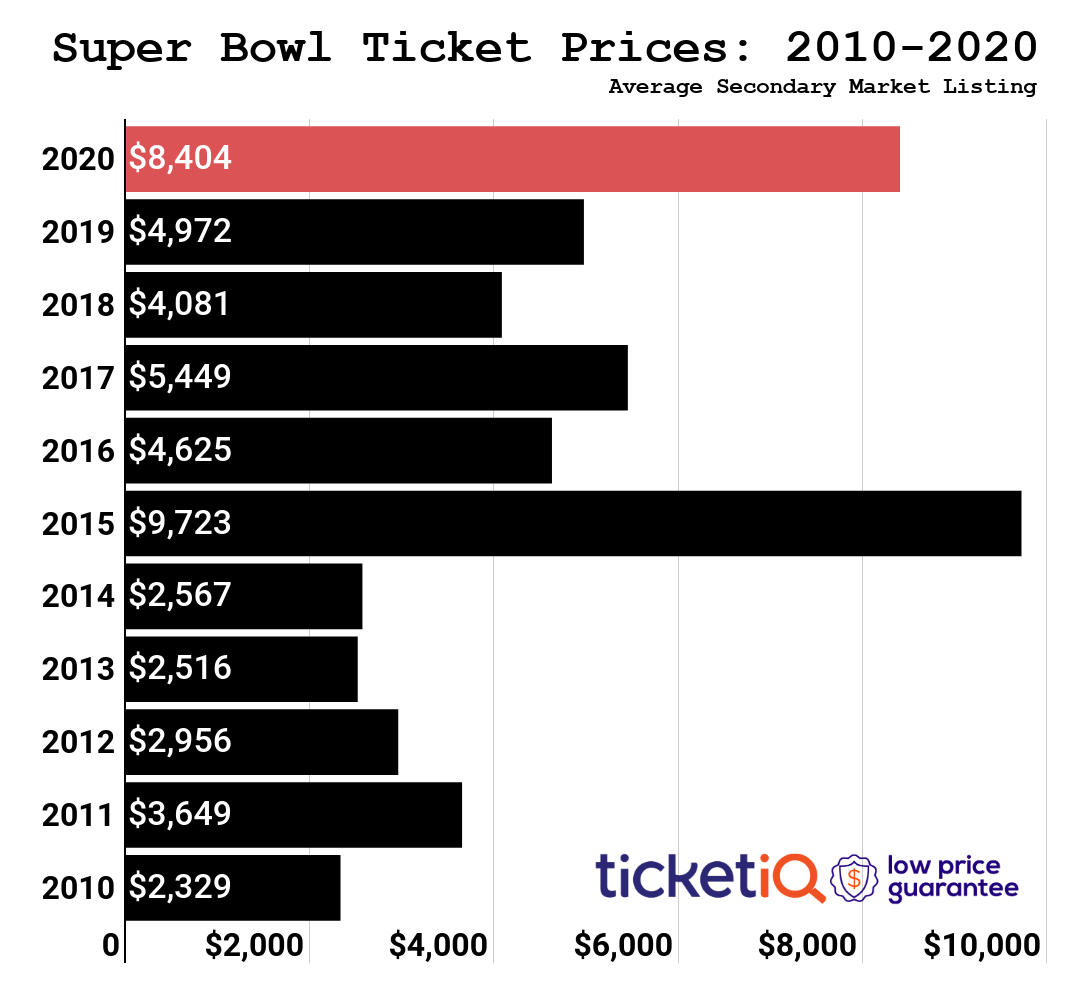 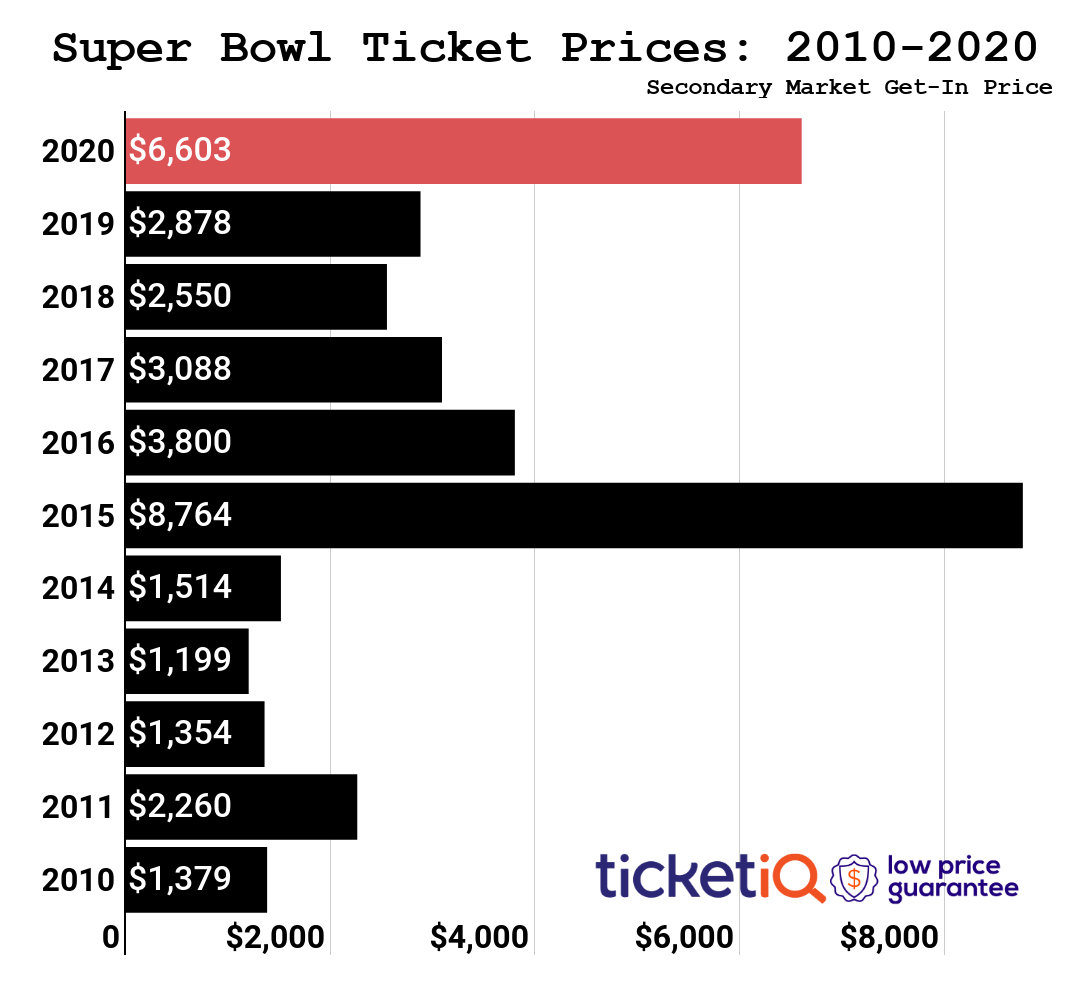 Currently, there are just under 800 Super Bowl secondary market tickets available.  Below is an infographic showing ticket quantity trends on the secondary market since 2016. Given how closely the 2019 and 2020 quantity started, we'd expect a similar path this year, and are not anticipating any big inventory spikes that will bring prices down. 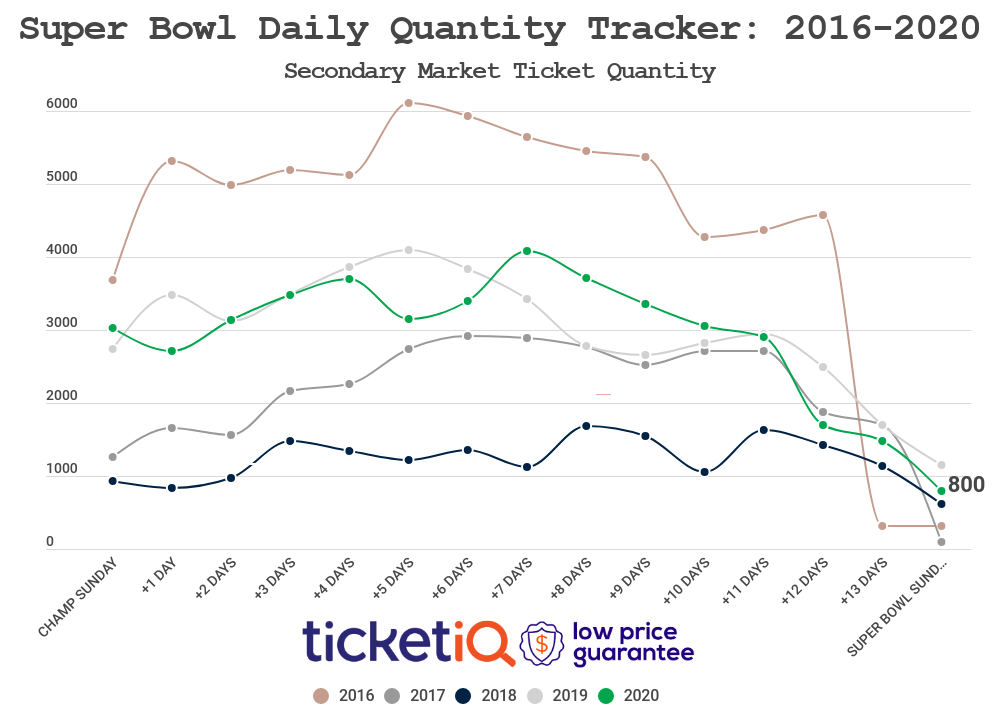 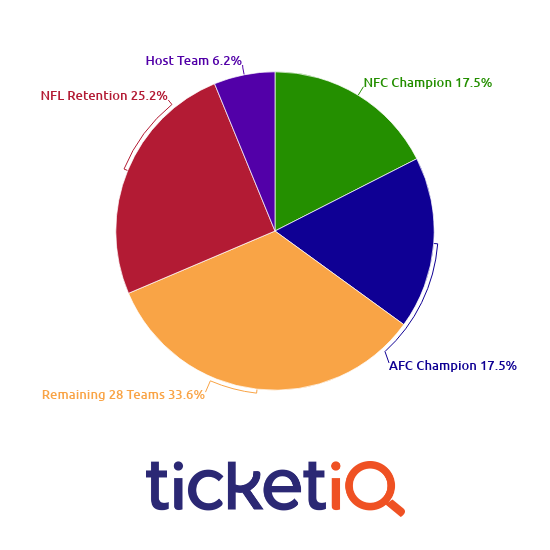 For fans that are not looking to spend $5,000 on a ticket but that have already booked flight and hotels, the good news is that there are more events than ever happening in Miami for any price point. Starting Thursday, Miami will be the equivalent of a massive music festival with some of the biggest names headlining over 50 shows, including Maroon5, Guns N' Roses, Lizzo, Harry Styles, and Snoop Dogg.

Below, we take a look by the numbers on all the major parties, events. The tentpole event of the weekend is the Official 3-night Super Bowl Music Festival at American Airlines Arena, which has tickets still available on Ticketmaster for $50, which may be the best deal in Miami all weekend.

Not to be left out, Kanye West  announced Thursday that he'll be performing his Gospel Choir on Sunday morning with tickets as low as $20 for the Lawn, for fans looking to pray for their team, or a last-minute miracle ticket to the game.