Where do the San Francisco 49ers play their home games?

Primary market face-value tickets went on sale shortly after the NFL schedule was released via Ticketmaster. On the secondary market, TicketIQ has Fee-Free San Francisco 49ers tickets which also include a Refund Guarantee. Our Refund Guarantee states that if an event is canceled or deemed unfit for fans to attend, TicketIQ will refund ticket buyers in as soon as 15 days. That means that you can buy from TicketIQ worry-free. Customers on TicketIQ save between 15%-25% compared to other secondary market ticketing sites.

How Much Are San Francisco 49ers Tickets

On the primary market, tickets are available in both lower and upper sections of Levis Stadium, from around $97 for lower-demand games like the Colts to as much as $225 for the Packers game and $220 for the Seahawks game on October 3rd. Based of the game, prices on the secondary market are either in line or below primary prices, so it's important to shop around to find the right ticket at the right price. As of June 1st, the cheapest Seahawks tickets on TicketIQ are going for $131, considerably below face value.

Information regarding the San Francisco 49ers updated 2021 attendance policy and potential capacity limits has not been released. However, it was also reported recently that 30 of the 32 NFL teams already have approval for full capacity at stadiums at the start of the 2021 preseason. The Denver Broncos and Indianapolis Colts have yet to get approval, but both teams are reportedly "on track".

San Francisco 49ers season tickets are currently available, and fans must purchase an SBL (Stadium Builder’s License) in addition to the cost of season tickets. All season ticket holders will get inclusive snacks and non-alcoholic beverages, including hot dogs, garlic fries and nachos. Season ticket holders will also get access to an annual NFL Draft Party, priority post-season and single-game tickets, a holiday photo shoot at Levi’s Stadium, access to training camp, and more. Season tickets are available throughout the stadium, including at field level and in the Citrix Owners Seat section.

The 49ers have multiple Club and Premium seating options available. Club seats at Levi's Stadium offer excellent sightlines, semi-private stadium entrances, bigger, plusher seats, and access to private restrooms. Among them:
Citrix Owners Seats: Located high above the stadium, this plush club features movie-theater style seating outside and a high-end Club inside. The interior of the Club has bar-style and Club seating, and premium food-and-beverage offerings.
Field Level Season Tickets: These exclusive seats are a unique experience, offering fans the chance to sit just feet from the playing surface. Each field box has plush, comfortable recliners located behind the end zones. In-seat food service is included with the price of each seat.

Official health and safety protocols for the 2021 season have not yet been announced.

Fans can access Levi’s Stadium via digital tickets, and are encouraged to do so. Fans can download season tickets and single-game tickets using the 49ers Mobile App. The team website provides a detailed video for how to download and use the app. Fans can also buy, sell or transfer tickets on the app.

Primary market face-value tickets went on sale shortly after the NFL schedule was released via Ticketmaster.

For teams that were able to host fans for the 2020 season, prices were much higher than in years past, at an average price of $407. That was up from $258 in 2019.  With the additional game each team will be hosting, we'd don't expect prices to increase from 2019 overall, although certain high-interest teams could see prices increase( Raiders, Bills, Jaguars), while other are likely to see prices drop from 2019 levels (Patriots).

For Week 1, the Raiders fan opener at Allegiant Stadium is the most expensive game, with tickets starting at over $800. The next most expensive Week 1 game is in Tampa Bay, where the Buccaneers will hoist their Super Bowl Championship banner against the Cowboys on Thursday night.

Below are two infographics showing the most expensive teams and games for the 2021 schedule based on the cheapest ticket on the secondary market: 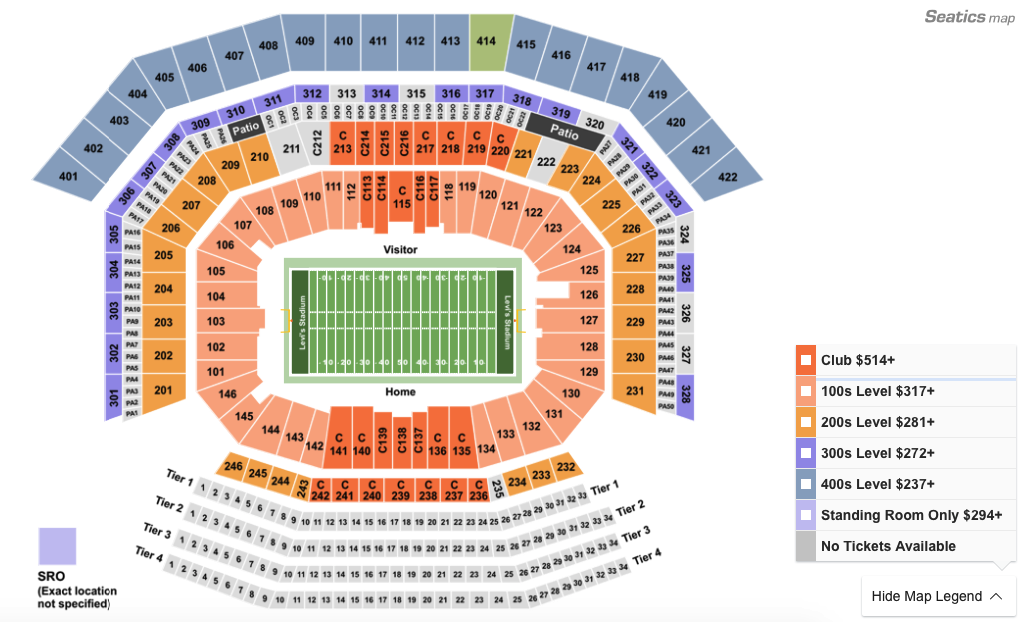 Coming off a short week after playing in the Monday Night Football game, the 49rs will make their first trip to the newly renovated Los Angeles Memorial Coliseum for the first of two meetings between San Francisco and Los Angeles. Few seats remain on the primary market, and Ticketmaster shows the cheapest seats are $90 in the 300 Sections in the end zone, or for a seat in Section 227, Row 6 with an obstructed view. The most expensive ticket still available is going for $600 in Section 106B, Row 28 at the 45-yard line behind the Rams bench. All of the Club sections are located on the south side of the Coliseum, along the sideline on Levels 400-700. Club Seats are available in several 400-Level sections for $375. Fans with Club tickets get access to lounges, premium food and beverage and more. On the secondary market, plenty of seats remain, though none are available on Club Level. On TicketIQ, the cheapest seat for Sunday’s game is $103 in upper 300B, the last section on the corner on the peristyle end of the field.  The best seats still left appear to be a pair in Section 106A, Row 28 at the 40-yard line behind the Rams sideline for $468.

Where To Find The Cheapest Washington State Vs. UCLA Tickets At Martin Stadium - 9/21/19