From $48+
Lucas Oil Stadium - Indianapolis, IN

Where do the New York Jets play their home games?

Primary market face-value tickets went on sale to the general public on Monday, May 17th via Ticketmaster.
On the secondary market, TicketIQ has Fee-Free New York Jets tickets which also include a Refund Guarantee. Our Refund Guarantee states that if an event is canceled or deemed unfit for fans to attend, TicketIQ will refund ticket buyers in as soon as 15 days. That means that you can buy from TicketIQ worry-free. Customers on TicketIQ save between 15%-25% compared to other secondary market ticketing sites.

How Much Are New York Jets Tickets

On the primary market, tickets are available in every level and in most sections, from $59 for the lower-demand games like the Bengals and as much as $89 for the Patriots games and $93 for the January 2nd game against former Patriot and current Super Bowl champ, Tom Brady. There are unsold 'face value' tickets available in almost every section for every game.
Based of the game, prices on the secondary market are either in line or below primary prices, so it's important to shop around to find the right ticket at the right price. For the Buccaneers game, the cheapest NO FEE TICKET on TicketIQ is $106 (VIEW BELOW), while the cheapest ticket directly from the Ticketmaster as of June 1st is $110, after Fees.

MetLife Stadium has the following premium experience seating options: the EY Coaches Club and the Mezzanine Clubs. Other opportunities include the Hangbar, Flight Deck, MetLife 50 Club, and the Lower Prime Club.
The EY Coaches Club, a private, on-field deck behind the bench, is found on the plaza level through the Bud Light Gate. It includes all-inclusive concessions and non-alcoholic beverages.
The 200-Level Mezzanine Clubs are the United Rentals Club (Section 208), which is found through the East VIP entrance, and the Toyota Club (Section 244), which is through the West VIP Entrance. The upscale Mezzanine Clubs are in total 42,000 square feet.

It was recently announced that the New York Jets plan on hosting fans at full capacity for their 2021 home games at MetLife Stadium.
It was also reported recently that 30 of the 32 NFL teams already have approval for full capacity at stadiums at the start of the 2021 preseason. The Denver Broncos and Indianapolis Colts have yet to get approval, but both teams are reportedly "on track".

On the primary market, season tickets are available via Ticketmaster. Season tickets start at $600 per seat in the 300-Level Sections via the Jets’ Ticketmaster page, and the most expensive available season ticket is $950 per ticket in the 200's.
Those who purchase season tickets will receive the following amenities: food, beverage, and merchandise credit, presale offers, and savings of up to 25 percent at the Jets Flagship Store and online at JetsShop.com.
There are no mini plans available, but group discounts can be used for groups of up to 350. The Jets can guarantee all their seats together after placing a deposit.

To manage your Jets tickets, the team has a mobile app available on the App Store and Google Play. The app is also used for mobile entry into the venue. The Jets require ticket holders to use mobile tickets to enter MetLife Stadium, and it is suggested to add the ticket to your phone’s mobile wallet to avoid slow WIFI or cellular signal while entering the stadium. Screenshots of the dynamic barcode on the ticket will not be accepted.

Primary market face-value tickets went on sale to the general public on Monday, May 17th via Ticketmaster.

For teams that were able to host fans for the 2020 season, prices were much higher than in years past, at an average price of $407. That was up from $258 in 2019.  With the additional game each team will be hosting, we'd don't expect prices to increase from 2019 overall, although certain high-interest teams could see prices increase( Raiders, Bills, Jaguars), while other are likely to see prices drop from 2019 levels (Patriots).

For Week 1, the Raiders fan opener at Allegiant Stadium is the most expensive game, with tickets starting at over $800. The next most expensive Week 1 game is in Tampa Bay, where the Buccaneers will hoist their Super Bowl Championship banner against the Cowboys on Thursday night.

Below are two infographics showing the most expensive teams and games for the 2021 schedule based on the cheapest ticket on the secondary market:

How To Find Cheapest Dolphins Vs. Jets Tickets In 2020

How To Find Cheapest Bills Vs. Jets Tickets In 2020

Primary market tickets to the New York Jets at Buffalo Bills AFC East matchup on Sunday, September 13 are currently available via  Ticketmaster. The game is the season opener for both teams.
Read More →

Where To Find The Cheapest Jets Vs. Bills Tickets In 2019 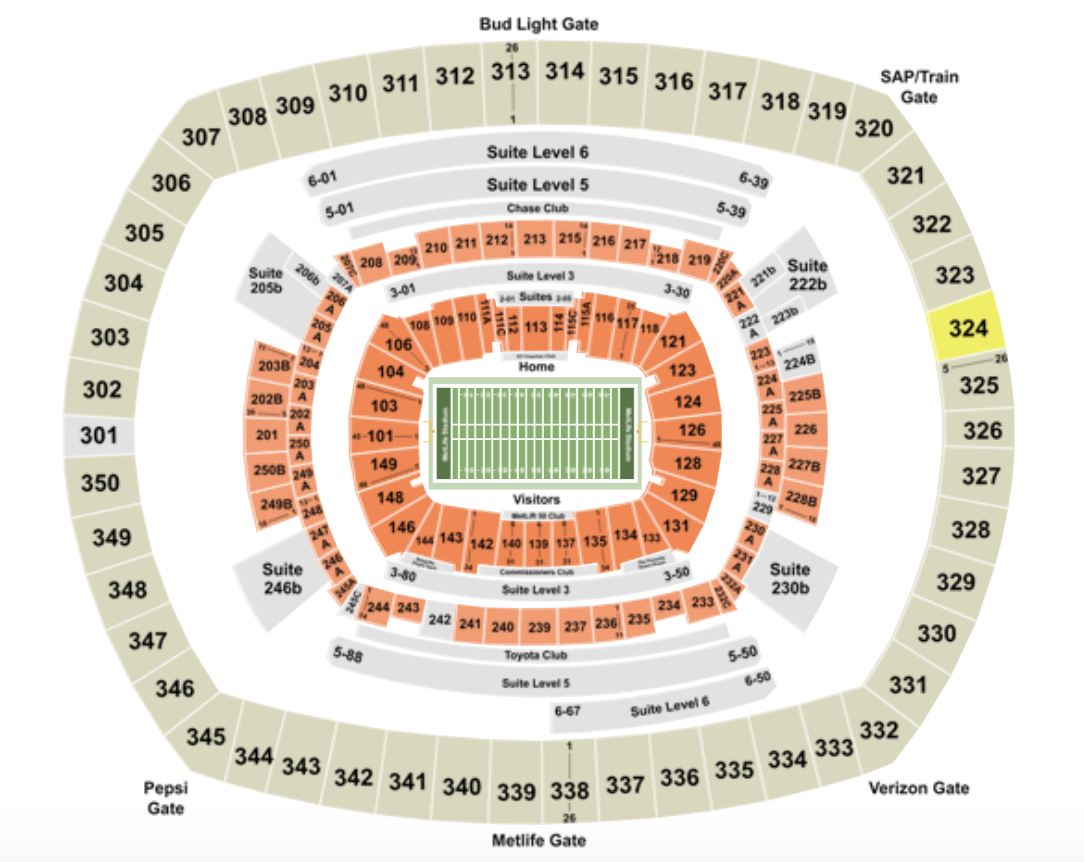 How Much Are Jets Vs. Bills Tickets at Metlife Stadium on 9/8/19

The cheapest tickets for the NFL’s opening weekend at Metlife Stadium start at $58 on the secondary ticket market for an endzone seat in section 324. All endzone seats are sold out, which means that the secondary market is the only way to get tickets in that level of Metlife Stadium. Directly from the Jets, the cheapest ticket available on Ticketmaster is $87 for a 3rd row seat in section 309.  While there are scattered unsold tickets directly from the team, as the below screenshot shows, they're mostly located in the Upper Level. For fans looking to sit in the first three rows of the 300-level, the Jets have $100 tickets available for sale. On the secondary market, the lowest row available is 9. For lower level seats, the secondary market is primary options, with endzone 100-level seats starting under $100.  For sideline seats in the 100-level, tickets start are around $175 for tickets behind the Jets bench, and slightly less for tickets on the Bills side.

Below is a screenshot of ticket availability on TicketIQ as well as from the Jets directly.

TicketIQ has fee free tickets to sold out events at MetLife Stadium. That means that if you find a secondary market ticket for less on a site like StubHub or Vivid Seats, we’ll give you 200% of the difference in ticket credit. TicketIQ customers save up to 25%. TicketIQ also provides access to unsold face value tickets for all events at MetLife Stadium via Ticketmaster.

Where to Find Cheapest Jets Vs. Patriots Tickets In 2019 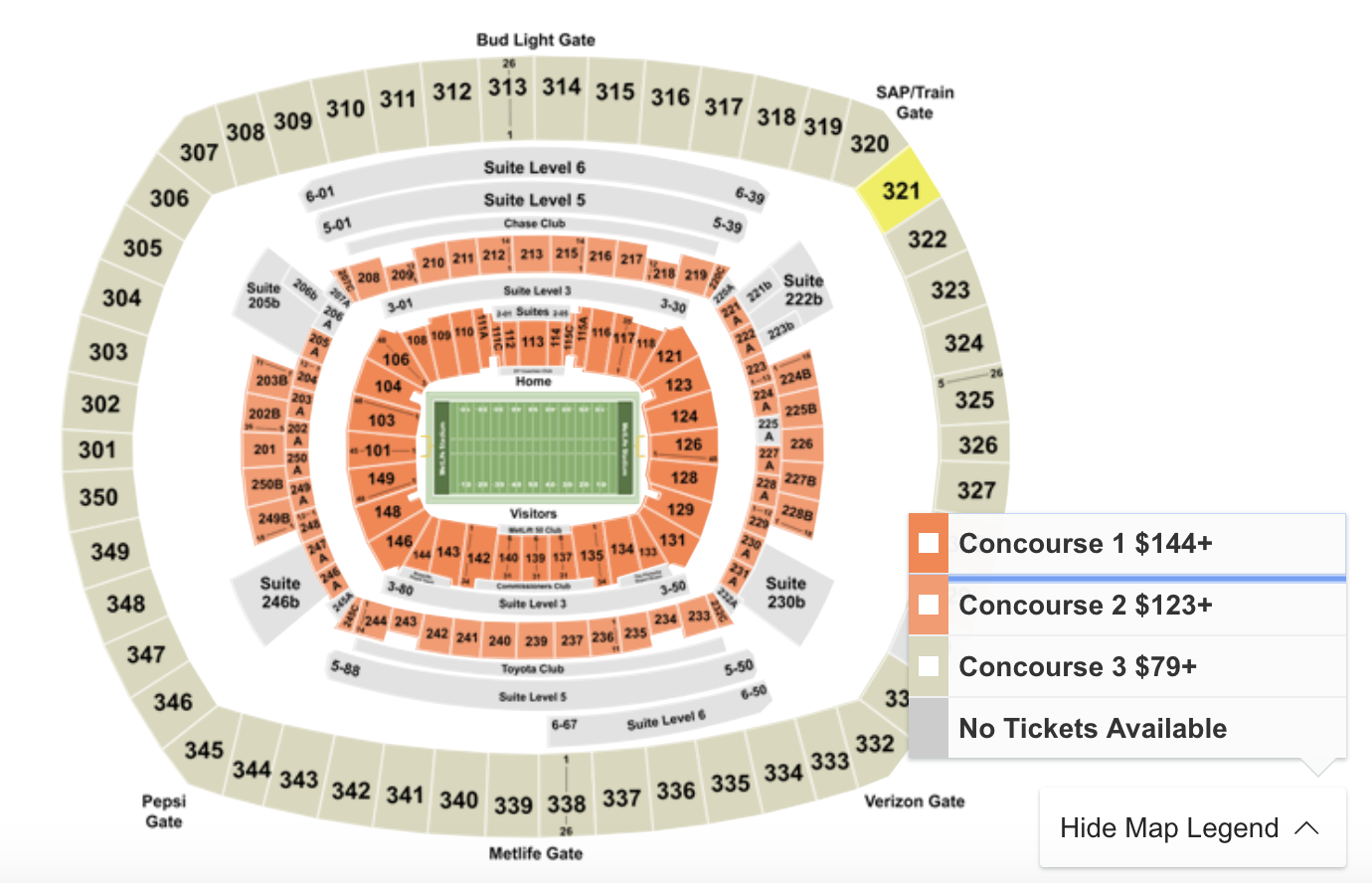 Where To Buy 2019 Patriots Vs. Jets Tickets

For the October 21st game at Metlife Stadium,  the cheapest tickets starting at $50 with lower level seats in the 100-level starting at $115. Below is a seating chart with prices across each zone at MetLife Stadium.  The Patriots visit is the second most expensive ticket on the Jets 2019 home schedule, behind only the Cowboys visit on October 13th. Unsold face value tickets are available directly from the Jets starting at $70 directly from Ticketmaster,  with lower level seats available for $160. Below is a screenshot of availability directly from the Jets.