How Much Are New York Giants Tickets

Over the course of the Eli Manning Era, New York has been a Giants city.  Over the last 5 years, however, the average price for Giants tickets on the secondary market has dropped from over $300 to $214. While the Jets have had a more turbulent ticket history, for 2019 prices on the secondary market are headed up, with prices up 40% compared to the start of the season last year.  With average secondary-market prices of $209 for the Jets and $217 for the Giants, both New York teams have solid markets that will likely go up if the teams win. 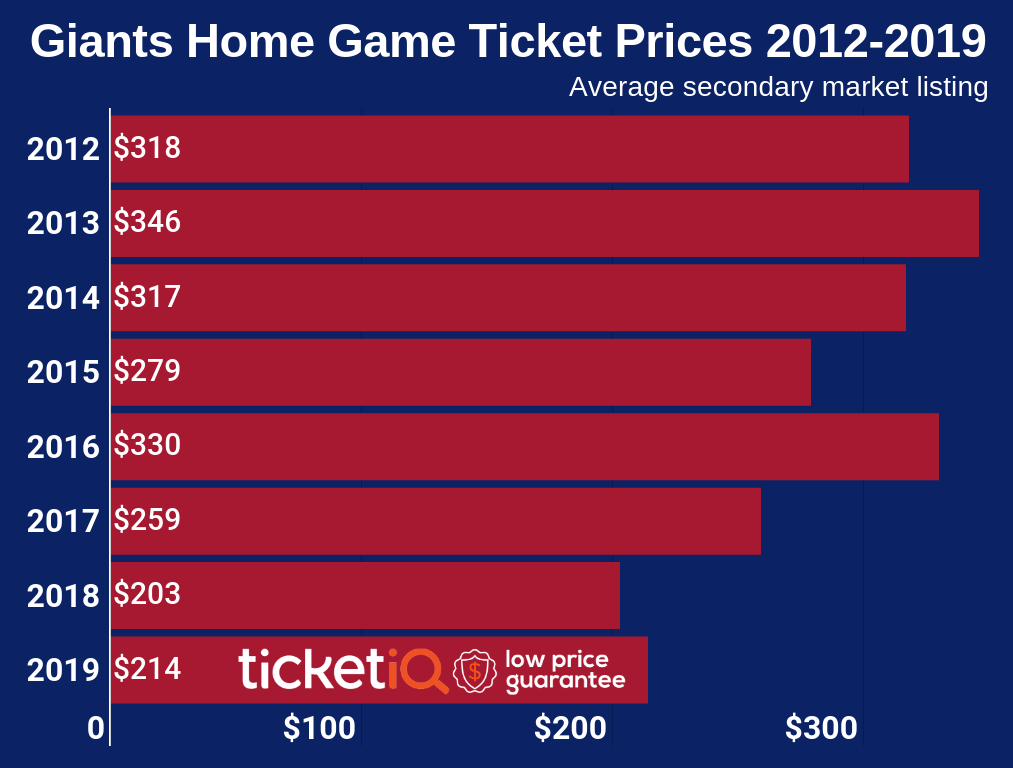 On the primary market, while the Jets have been in the single-game business for a few years, for the Giants direct-to-fan single game sales is new territory.  Giant’s season tickets used to be a generational inheritance that were expensive and difficult to come by. In 2019, their a couple clicks away, and cheaper than ever. They’re also available to be purchased at an impulse for the first time in a generation, especially if you’re looking to sit in the upper levels. Lower Level shoppers will need to stick to the secondary market.

TicketIQ is a ticket market place with access to Low Price Guarantees on all NFL tickets. If you find the same ticket for less, we'll give you 200% of the difference in ticket credit. TicketIQ is also the leading source of ticket market data used by major news outlets, like CNBC, Business, Insider, Fox and others. Enjoy the TicketIQ blog for most in-depth coverage of the Vikings ticket market and use TicketIQ.com to save 15% compared to other major tickets sellers.

MetLife Stadium offers ADA assistance from the parking lot to the seating area. The drop-off and pick-up area for guests with disabilities is located near Lot C, which is adjacent to the Verizon Gate. The Guest Services Booths/Concierge Desks are found at the following locations:

Plaza Level: Inside of SAP, Verizon, MetLife, and Pepsi Gates

Free food and non-alcoholic beverages are just a couple of the amenities of the EY Coaches Club, which is found on the plaza level through the Bud Light Gate. In addition to having a private, on-field deck behind the bench, fans get the opportunity to see the players leave the locker room before taking the field.

Also found on the plaza level (access through MetLife Central) is the MetLife 50 Club. This club also includes free food and non-alcoholic beverages and seats at the 42-yard lines. In addition, fans get the opportunity to stand just yards behind the visitors’ bench as well as having complimentary free VIP parking.

MetLife Stadium has more than 200 suites, and suites can be utilized for small gatherings of 12 or large parties with as many as 30 people. There are three suite levels: levels 3, 5, and 6. Suites are also found on the level with the 100 sections.

Which side is the New York Giants or New York Jets Bench on?

What’s the best way to tailgate at MetLife Stadium?

According to the MetLife Stadium website, parking lots typically open five hours prior to an event for tailgating. Unfortunately, the use of grills and other heating devices are not allowed in the parking decks. Saving parking spaces is not be allowed either. Groups desiring to tailgate together should plan to meet in advance and arrive together. The following are also not permitted: tents or canopies exceeding 8-foot by 8-foot and vehicles measuring more than 18 feet in length and/or 8 feet in width.

What is the mobile ticketing policy at MetLife Stadium?