Sorry! There are currently no tickets available for Minnesota Vikings.

On the primary market, Minnesota Vikings tickets are available through the team website, though season tickets are sold out. Single-game tickets are available often in limited quantities through Vikings on Ticketmaster.  The majority of tickets available are 'market-priced' including tickets 5 rows off the the field in the endzone for the most expensive game of the season based on secondary market prices for the Packers, two days before Christmas. Lower demand games like the Redskins visit on October 24th have face value tickets starting from $64.

On the secondary market TicketIQ has Low Price Guarantees on Vikings tickets for all games on the 2019 schedule, in addition to Low Price Guarantees on all NFL tickets, which means that if you find a secondary market ticket for less on a site like StubHub or SeatGeek, we’ll give you 200% of the difference in ticket credit. TicketIQ customers save an average of 5%-20% compared to StubHub and SeatGeek.

How Much Are 2019 Minnesota Vikings Tickets 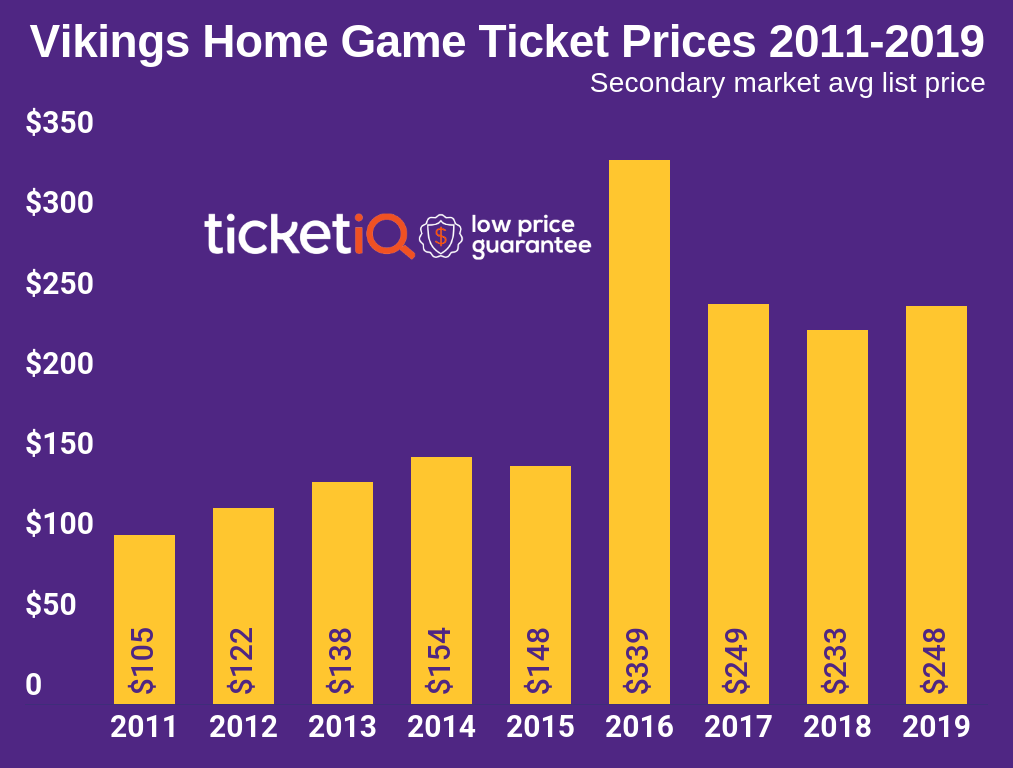 Price For Each Game On The Vikings 2019 Schedule

These NFL rivals have played on and off since 1966, and the Vikings hold an all-time series advantage of 19-11. The teams last played on December 3, 2017 at Atlanta, and the Vikings won the for the third consecutive time. This game will mark the first time Atlanta has played at Minnesota since 2014.

The most important meeting between these teams was in 1977, when the Raiders beat the Vikings in Super Bowl XI. This game will be the Raiders first visit to Minnesota since 2011, and it’s one of five games with an average asking of more than $200 on the secondary market. The Vikings won the last game, 30-14, at Oakland.

This game has the second highest average asking price behind the Packers game, and the game is a rematch of the January 21, 2018 NFC Championship in which Philadelphia beat Minnesota. The teams played last season, and the Vikings avenged the loss, but it’s probably fair to say a rivalry is blooming here. The teams are 14-14 in all-time meetings.

This is the cheapest game of the season, giving Vikings fans a great mid-season opportunity to see a home game at an affordable price. Both teams play in the NFC, but they’ve met only 26 times, and are 13-13 all-time. The  Vikings have won three of the last four.

The Broncos have dominated this rivalry of late, winning the last three consecutive, but it’s been four years since the teams have played. This is the fourth priciest game of the season. There’s been plenty of parity in this rivalry, too – the all-time series record is 7-7.

This is the second cheapest game on the secondary market likely in part to Detroit’s long-standing struggles. But it’s another game that presents a chance for fans to see an NFL game for less than $200. As division rivals, these teams play twice a year, and the Vikings have won the last three consecutive.

It’s no surprise that one of the Vikings biggest rivals is commanding the highest average asking price on the secondary market. The rivalry began in 1961, when the Vikings entered the league and has been robust and intense ever since. The Packers have a 60-54-3 all-time series advantage, but the Vikings won the last meeting, 24-17, on November 25, 2018. This game will be featured on Thursday night football.

Just six days after playing the Packers, the Vikings will take on their other key rival at home. The rivalry with the Bears also dates to 1961 when the Vikes entered the league, and the Bears hold a 60-54-2 all-time series advantage. The teams play twice a year, and the Bears won both meetings in 2018.