Sorry! There are currently no tickets available for Los Angeles Chargers.

Where To Buy 2019 LA Chargers Tickets

Single game tickets for Chargers home games are available through primary partner Ticketmaster. The season ticket packages for 2019 at ROKiT Field at Dignity Health Sports Park are sold out, but 2020 season ticket memberships for LA Stadium at Hollywood Park are now on sale. For 2019 tickets, individual ticket sales can be found here

To manage your Chargers tickets, the team has a mobile app available for iPhone and Android. The app can also be used for mobile entry into the venue. PDF ticket delivery methods are no longer allowed. For any game day ticket concerns, the Northwest Box Office opens four hours before kickoff.

On the secondary market TicketIQ has Low Price Guarantees on Chargers tickets for all games on the 2019 schedule, in addition to Low Price Guarantees on all NFL tickets, which means that if you find a secondary market ticket for less on a site like StubHub or SeatGeek, we’ll give you 200% of the difference in ticket credit. TicketIQ customers save an average of 5%-20% compared to StubHub and SeatGeek.

How Much Are 2019 LA Chargers Tickets

Tickets for Chargers home games on the secondary market are averaging $292, which is the eighth highest in the NFL. The team’s ticket price is 25% higher than last year and 37% higher than five years ago. With a get-in price of $286, the most expensive game of the 2019 season on the secondary market is their week 6 match up against the Pittsburgh Steelers. The least expensive game on their schedule is week 3 against the Texans. The get-in price for that game is $76. 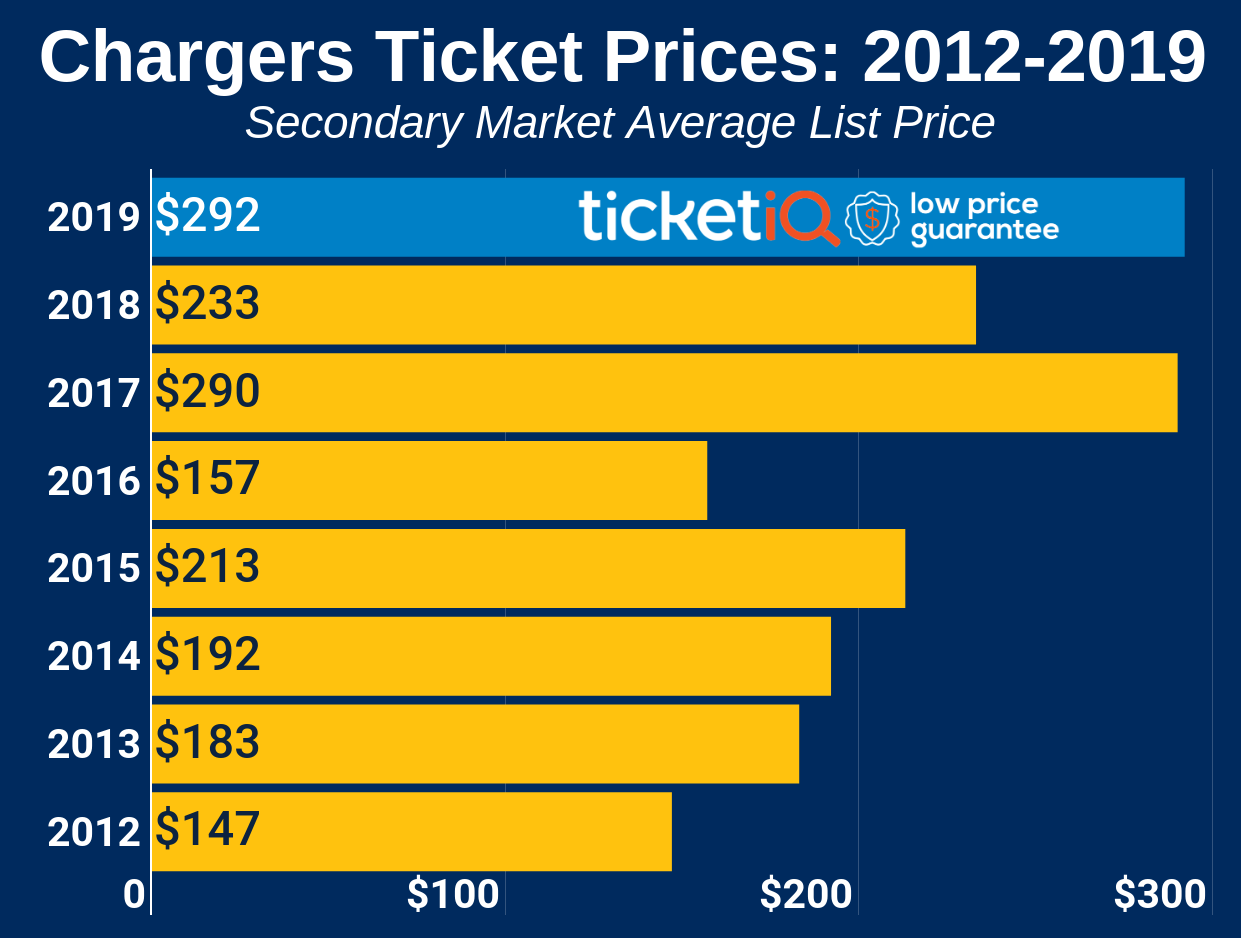 Prices For All Chargers Home Games On The 2019 Schedule

The Chargers open the season against the Colts for the lowest average ticket priced game at ROKiT Field this season. Philip Rivers and Andrew Luck last met in 2016. The Colts scored in every quarter of the contest, as Indianapolis defeated the Chargers, 26-22, at Lucas Oil Stadium.

The lowest get-in price of the season for Chargers home games is against the Texans. The Texans and Colts also last met in 2016, and Rivers threw three touchdown passes en route to the Chargers’ 21-13 victory at NRG Stadium in Houston.

The Chargers and Broncos have split the season series each of the last three seasons. In their last meeting, Los Angeles held Denver to nine points in the 14-point victory in the season finale at Sports Authority Field at Mile High.

The Chargers’ most expensive home game this season is against the Steelers. The 2019 meeting will hope to be as exciting as the game last year, a 33-30 Chargers victory. Los Angeles scored 18 fourth quarter points, including Michael Badgley’s 29-yard field goal as time expired.

The only home game for the Chargers in November is against the Packers. Rivers has faced off twice with Aaron Rodgers, and Rodgers has been victorious each time. In the last meeting, the Chargers had 15 more first downs and 178 more total yards, but lost, 27-20. The Chargers have not defeated the Packers since 1984.

The Chargers and Vikings have alternated victories over the course of their 12-game history. The most recent meeting was a 31-14 Vikings victory in 2015. Minnesota scored in every quarter, and Adrian Peterson rushed for 126 yards and two touchdowns.