Sorry! There are currently no tickets available for Houston Texans.

The Houston Texans have clinched the AFC South title and the No. 4 seed in the AFC playoffs. They will host a Wild Card game against the Buffalo Bills on January 4.

Primary market tickets via Ticketmaster tickets to a Wild Card game are sold out, but should the Texans host the AFC Championship, Ticketmaster shows a limited number of seats still available.

On the secondary market, TicketIQ has Low Price Guarantees on all sold out Houston Texans playoff tickets, in addition to Low Price Guarantees on all NFL playoff tickets. That means that if you find a secondary market ticket for less on a site like StubHub or Vividseats, we’ll give you 200% of the difference in ticket credit. TicketIQ customers save an average of 5%-20% compared to StubHub and Vividseats.

How Much Are Houston Texans Playoff Tickets

For the Wild Card game, TicketIQ has seats available throughout NRG Stadium for the Wild Card game, starting at $111 on the 600 Level. The best seat available in the stadium is trending at $1,217 and is located in Level 107, Row A at the 50-yard line behind the Texans bench. There are many seats remaining on field level at the 50-yard line on both sides of the field, and the cheapest is $376 in the same section, Row DD. End-zone seats are available on the 100 Level starting at $254. In addition, fans can buy access to the Churrascos Club for $95 and pair that with any seat. Below is a screenshot showing inventory on TicketIQ and get-in price by zone. 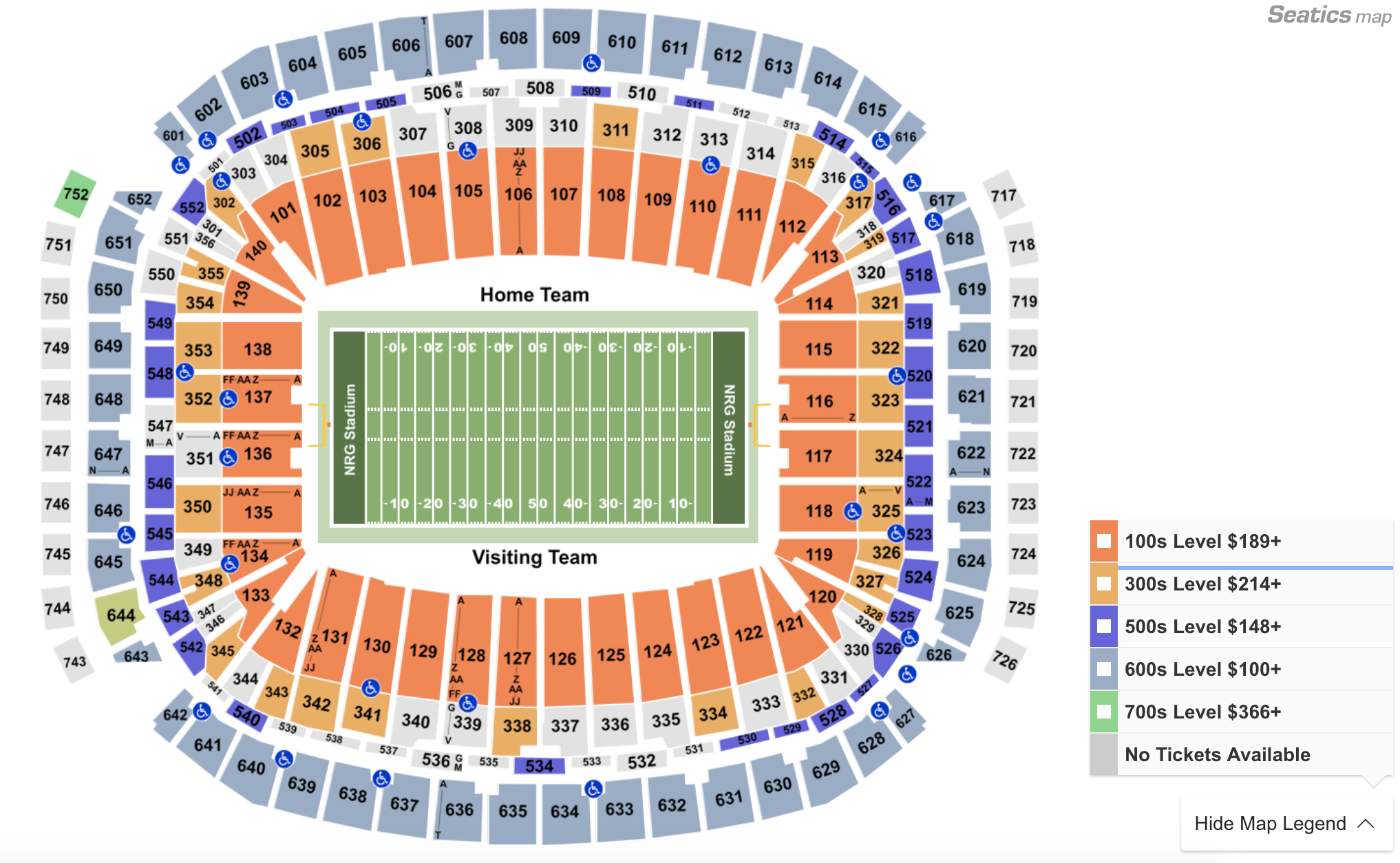 Historically speaking, the average asking price for the Wild Card round is the second cheapest of the decade at NRG Stadium, according to TicketIQ. Only the 2017 Wild Card game against the Raiders, which settled at $230, cost fans less. The priciest Wild Card game cost fans $379 last season when the Texans played Indianapolis.

For Sold Out Seats and Events, TicketIQ has Low Price Guarantees on Houston Texans games and concerts at the NRG Stadium. That means that if you find a secondary market ticket for less on a site like StubHub or Vivid Seats, we’ll give you 200% of the difference in ticket credit. TicketIQ customers save up to 25% compared to other secondary sites. TicketIQ also provides access to unsold face-value tickets for all events at NRG Stadium via Ticketmaster.

Floor seating at NRG Stadium consists of sections depending upon the number of guest arriving and accessibility. Behind the stage, sections include 113 to 119 and 320 to 327 and 617 to 625.

WHERE CAN I FIND CHEAPEST TICKETS FOR NRG STADIUM

The Houston Texans have unsold face-value tickets available for most games, which can be purchased directly through Ticketmaster. Prices may be above or below prices on the secondary ticket market. Many Concerts also have unsold tickets. For Sold Out Seats and Events, TicketIQ has Low Price Guarantees on all events at NRG Stadium. That means that if you find a secondary market ticket for less on a site like StubHub or Vivid Seats, we’ll give you 200% of the difference in ticket credit. TicketIQ customers save up to 25%.

A digital or mobile ticket is the safest most convenient and flexible way to receive and manage tickets for NRG Stadium.  You can access all your season tickets through the Official Houston Texans Mobile app or on HoustonTexans.com.

NRG Stadium offers other convenient services including wheelchair assistance, lost and found and wheelchair check in. Wheelchair escorts are provided through Guest Services. Please contact 832-667-1400 for any special assistance needs. Parking spaces for ADA guests are available and located throughout NRG Park on a first-come, first-served basis. Standard ADA parking can be found in Orange Lot: 6, 8, 10, 13, Maroon Lot: 14, 15.