Sorry! There are currently no tickets available for Detroit Lions.

Where To Buy 2019 Lions Tickets

Single game tickets on the primary market for the Lions go on sale on July 24th on the via primary partner Ticketmaster. There are multiple choices of season ticket packages available, and there is a new 12-month payment plan, which allows for one $89.83 payment per month for two season ticket memberships.  For season ticket buyers, 92% of tickets will have lower prices for the 2019 season, for the first time since 2014.  The team also introduced something called "Lionsurance" which allows fans who use eight games the ability to apply 50 percent of unscanned ticket value for up to two games toward 2020 season-ticket renewal.

On the secondary market TicketIQ has Low Price Guarantees on Lions football tickets for all games on the 2019 schedule, in addition to Low Price Guarantees on all NFL tickets for the 2019 football season, which means that if you find a secondary market ticket for less on a site like StubHub or SeatGeek, we’ll give you 200% of the difference in ticket credit. TicketIQ customers save an average of 5%-20% compared to StubHub and SeatGeek.

How Much Are 2019 Lions Tickets

Under Matt Patricia, the Lions went 6-10 last season after consecutive 9-7 seasons. Detroit’s fourth-place finish was its first since 2009. However, the Lions have made three postseasons over the last decade.

As Detroit looks for another playoff berth in 2019, tickets for Lions home games on the secondary market are averaging just $124, which is ranked 28th in the league. The price is 20% greater than last year’s average ticket price. 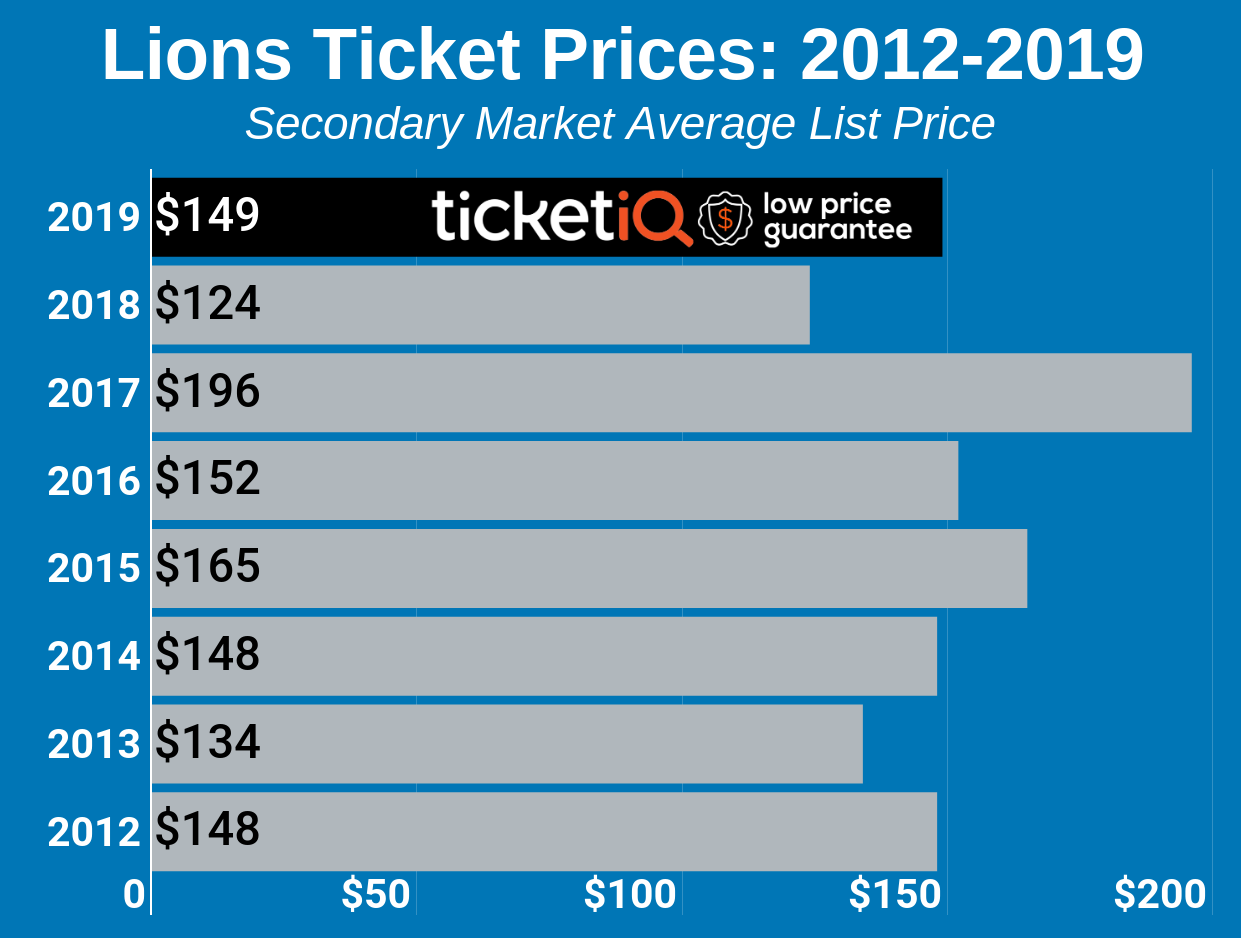 Ticket Prices For All Lions Home Games On The 2019 Schedule

Detroit last played the Chargers in 2015 when they were from San Diego. The Chargers won that contest, 33-28. Since the Chargers moved to Los Angeles, they have gone 9-7 and 12-4 and are coming off a divisional round loss in the 2018 playoffs.

The Chiefs blew out the Lions in 2015, the last year the teams faced off. The contest was in London, and Stafford was intercepted twice in the 45-10 loss. Stafford hopes to make a better showing against the reigning NFL MVP’s team.

Minnesota swept the season series last year and has won three consecutive games overall against Detroit. The most recent contest was a 27-9 Vikings victory at Ford Field. The Lions scored the first nine points of the game, but Kirk Cousins led Minnesota to three touchdown drives en route to the win.

The Lions last faced the Giants in 2017, and Detroit was the victor by the score, 24-10. Although the Lions offensive was not very explosive in the contest, Stafford threw for two touchdowns in the victory.

By far the most expensive contest of the Lions home slate this regular season is against the Cowboys. Unfortunately for Detroit, the Cowboys have been the victors in the three most recent meetings.

The Lions Thanksgiving game in 2019 is against the visiting Bears. Chicago swept the season series last year after Detroit swept the series the previous year.

Detroit has a great recent history against Tampa Bay, as the Lions have won four of the last five meetings. The most recent contest was in 2017 when the Lions won, 24-21. Stafford threw for 381 yards and a touchdown, and Theo Riddick scored two touchdowns.

TicketIQ is committed to the cheapest tickets possible, and we make much less on sold out tickets compared to other major marketplaces like StubHub and Vivid. That means ticket buyers save from up to 25% on TicketIQ on sports, music and theater. We're able to do this because we also work with teams, venues, and other ticket owners, to help them sell tickets at face price, directly to consumers like you, through Ticketmaster and Paciolan. For an overview of the 2019 NFL Ticket Buying landscape, and details on the cheapest way to get football tickets for every team, visit the TicketIQ Blog.

Parking on game days is found in Lot 4, which is located on Montcalm St. (located just north of Ford Field and east of Brush Street), in addition to the Ford Field Parking Deck, which is on St. Antoine off of Madison. The drop-off and pick-up areas are located on the corner of Montcalm and Brush near Gate B at Section 133 as well as on the corner of Adams and John R outside of Gate A at Section 100.

The “COM” ticket refers to the companion seat, and the “HAN” ticket stands for the space that requires a wheelchair or folding chair. Guest should contact the Ford Field Ticket Office in advance at 313-262-2167 for more information and availability. Seat relocation may also be available on game and event days.

Wheelchairs are available for transporting guests from the Guest Services locations to and from their stadium seats before and after the game, but will not be available for use during the event. There are also passenger elevators at Ford Field.

For more detail and views on Club and Premium Seating options, visit the Lions tickets website.

Relax in your theater-style seats overlooking the Lions sideline as the VIP wait staff serves an all-inclusive menu. Each week, guests can select a new menu.

The luxury lounge offers fans exclusive access to the stadium three hours prior to pre-game, as they get to see the Lions players leaving and entering the locker room. Fans get to enjoy unlimited food and beverage, which includes wine and beer. There is also deluxe lounge seating and flat screen televisions.

Which side is the Detroit Lions Bench on?

The Detroit Lions bench is directly in front of sections 105 to 107.

What’s the best way to tailgate at Ford Field?

According to the Ford Field website, tailgating is prohibited in the Ford Field parking lots. Eastern Market is the place to tailgate before Lions home games. However, fans must be there as early as 8:00 am to get parking. Tickets can be purchased here.

What is the mobile ticketing policy at Ford Field?