Sorry! There are currently no tickets available for Cleveland Browns.

Cleveland Browns tickets went on sale on July 15th on the primary market through Ticketmaster, and immediately sold out, which is new territory for the Browns. The result is the secondary ticket market is the best way to find Browns ticket in 2019.

How Much Are 2019 Cleveland Browns Football Tickets

The average asking price for a Browns tickets on the secondary market is $194, up from $67 in 2018, and the highest of the decade. Browns tickets are still among the cheapest in NFL — they’re ranked No. 23 in terms of price — meaning fans get one of the best deals in the NFL for home games in Cleveland. 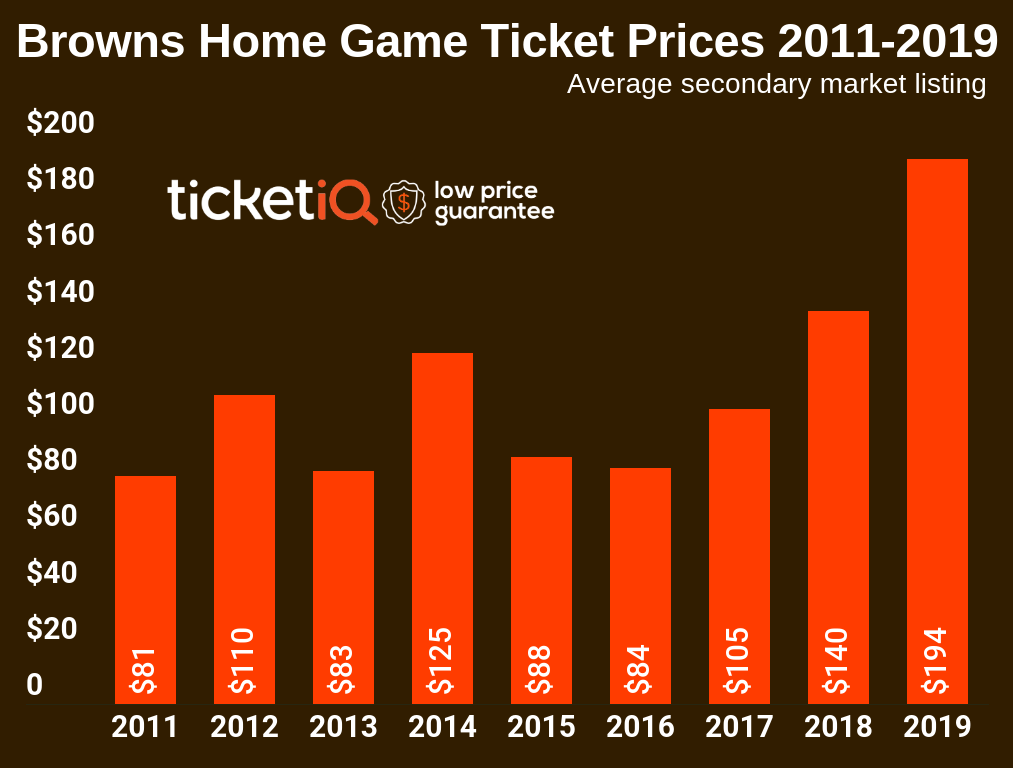 On the secondary market TicketIQ has Low Price Guarantees on Browns tickets for all games on the 2019 schedule, in addition to Low Price Guarantees on all NFL tickets, which means that if you find a secondary market ticket for less on a site like StubHub or SeatGeek, we’ll give you 200% of the difference in ticket credit. TicketIQ customers save an average of 5%-20% compared to StubHub and SeatGeek.

Dating back to their Houston Oilers days, the Titans and Browns have played consistently since 1970. The Browns hold an all-time series advantage, 35-31, but lost the last meeting, 12-9, in overtime on October 22, 2017. This game is the home and season opener for the Browns, and is one of four with a secondary market average asking price of more than $200.

A big draw after getting to the Super Bowl last season, the Rams game is trending as the fourth priciest on the secondary market. The Browns and Rams have played on and off since 1950, but this game will be the Rams’ first visit to Cleveland since leaving St. Louis after the 2015 season. The Rams have won the last two, including the last meeting at St. Louis on October 25, 2015.

The most expensive game on the secondary market, the Seahawks and Browns have played less than 20 times in history, most recently in 2015 at Seattle. This game will be the Seahawks first visit to Cleveland since 2011, when Seattle won, 6-3.

The Browns will be looking to break a two-game losing streak against the Bills. Both games were at Buffalo, and the teams last played in 2016. The Browns hold a 12-9 all-time series advantage and the Bills will be playing at Cleveland for the first time since 2013.

Cleveland’s closest regional rival, the Steelers and Browns both play in the AFC North, and this is the oldest rivalry in the NFL. Sometimes called the “Turnpike Rivalry” or the “Turnpike War,” the Steelers have owned the rivalry of late and have a 75-58-1 all-time series advantage. Though the Browns didn’t win a single game in 2017 while the Steelers won the division, Pittsburgh beat Cleveland twice, but by a total of only seven points. Last season, the teams played to a 21-21 tie on September 9 and the Steelers beat the Browns, 33-18, on October 28.

The second cheapest game in terms of secondary market average asking price, the Browns and Dolphins have little history. Cleveland has won the last two, in 2016 and 2013, but the Dolphins hold an 11-8 all-time series advantage. The game will be the first for Miami in Cleveland since 2013.

Another key regional rivalry, this game pits Ohio’s two NFL teams against each other. Both teams were founded by Paul Brown and the games are sometimes referred to as the “Battle of Ohio.” The Bengals have a 50-41 all-time series advantage, though Browns won both meetings last season. Despite the rivalry, this game is the cheapest on the secondary market.

The Ravens and the Browns have a bit of a complicated history, since the team now known as the Ravens began its life as the Cleveland Browns before Art Modell moved the team to Baltimore. The rivalry started in 1999 when Cleveland got its new Browns. The teams have never met in the postseason, and the Ravens hold a 30-10 all-time series advantage.

For sold out seats and events, TicketIQ has Low Price Guarantees for Cleveland Browns games at the FirstEnergy Stadium. That means that if you find a secondary market ticket for less on a site like StubHub or Vivid Seats, we’ll give you 200% of the difference in ticket credit. TicketIQ customers save up to 25% compared to other secondary sites. TicketIQ also provides access to unsold face-value tickets for all events at FirstEnergy Stadium via Ticketmaster.

Club Level seats are located on the 300 Level and offer views of the game from the sidelines. Membership includes lounge space, cushioned stadium seats, flat screen TVs, award-winning food choices, and private restrooms. Luxury Suites are located on the 200 and 400 Levels and are available for purchase annually, for single games, or to share. Amenities for the suites include all-inclusive food, wet bars, private restrooms, and VIP parking passes.

WHERE CAN I FIND CHEAPEST TICKETS FOR FIRSTENERGY STADIUM

The Cleveland Browns have unsold face-value tickets available for most games, which can be purchased directly through Ticketmaster. Prices may be above or below prices on the secondary ticket market. Many Concerts also have unsold tickets. For Sold Out Seats and Events, TicketIQ has Low Price Guarantees on all events at FirstEnergy Stadium. That means that if you find a secondary market ticket for less on a site like StubHub or Vivid Seats, we’ll give you 200% of the difference in ticket credit. TicketIQ customers save up to 25%.

The ticket holder (smartphone holder) can access multiple tickets on their phone and swipe to scan as their friends or family enter after each ticket scan. However, we recommend that you transfer tickets to each person attending the game for easier access into and throughout FirstEnergy Stadium.