Sorry! There are currently no tickets available for Chicago Bears.

Where To Buy 2019 Bears Tickets

Single game tickets for Bears home games are available through the Bears website via parimary partner Ticketmaster. Season ticket are not available, but the Priority List is available for those who are interested in season tickets in the future.

To manage your Bears tickets, the team has a mobile app available for iPhone and Android. The app can also be used for mobile entry into the venue. The Bears require ticket holders to use mobile tickets to enter Soldier Field, and it is suggested to add the ticket to your phone’s mobile wallet to avoid slow Wi-Fi or cellular signal at the stadium.

On the secondary market TicketIQ has Low Price Guarantees on Bears tickets for all sold out games and tickets on the 2019 schedule, in addition to Low Price Guarantees on all NFL tickets. That means that if you find a secondary market ticket for less on a site like StubHub or SeatGeek, we’ll give you 200% of the difference in ticket credit. TicketIQ customers save an average of 5%-20% compared to StubHub and SeatGeek.

How Much Are 2019 Bears Tickets

At Soldier Field, there are three levels and the prices for each level are as follows:

The Bears are averaging $510 for their tickets for games at Soldier Field this season, which is the second highest in the NFL. The price is 7% higher than last year’s and 57% more than five years ago. The most expensive game on the secondary market this season is the opener against the Packers in Week 1 with a get-in price of $375 per seat. On the other end of the spectrum is their Week 12 game against the Giants, which has a get-in price of $119 and is the least expensive of the season. 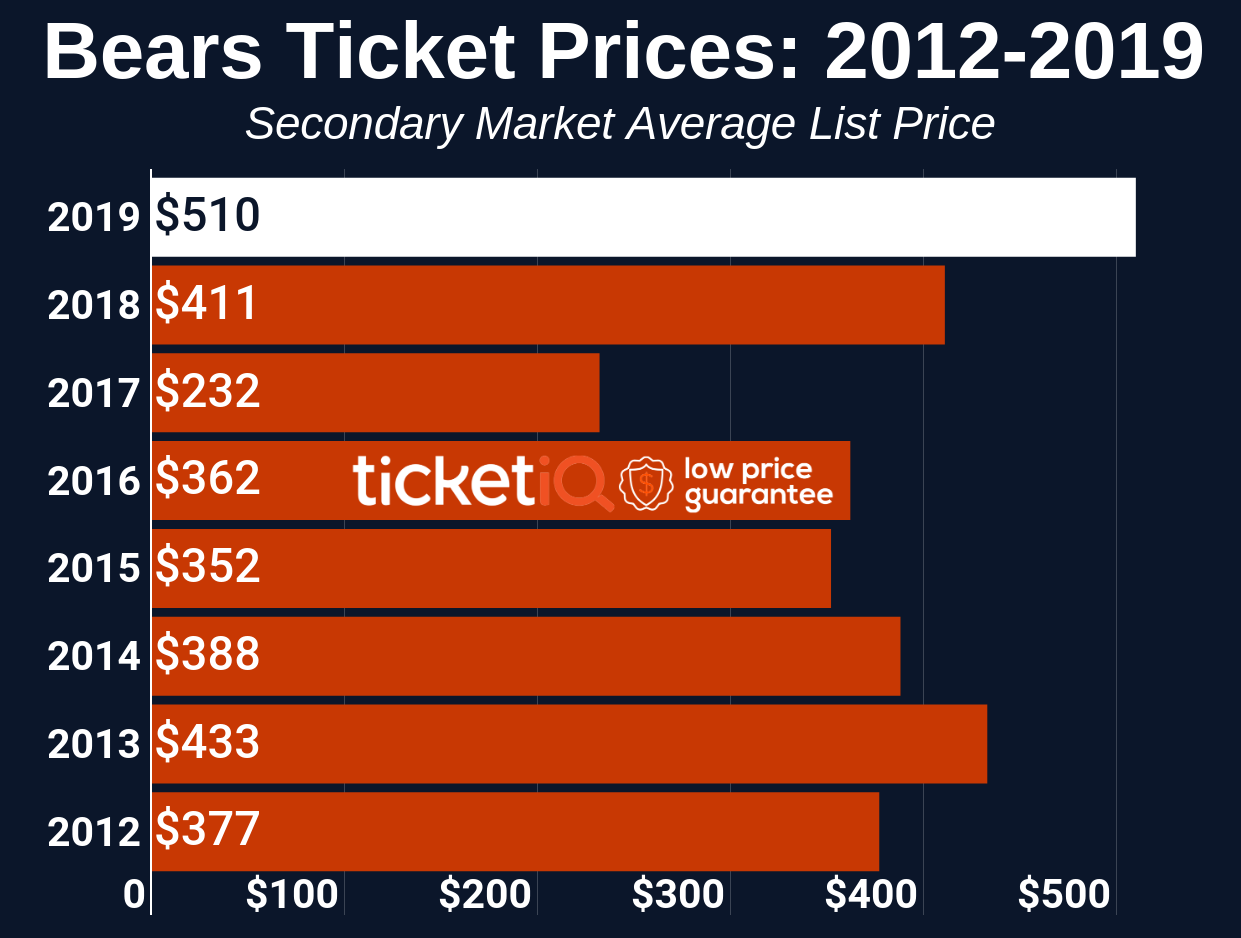 Prices For All Bears Home Games On The 2019 Schedule

The most expensive game by far this season is the opening game of the 2019 NFL season, which will be celebrating the 100th anniversary of the league. The oldest NFL rivalry will be showcased, as the Bears will be looking for their second consecutive victory over Green Bay after snapping a five-game losing streak last December.

Late in September, the Vikings head to Chicago. The Bears swept the season series last year, including Week 17’s 24-10 victory in which the Bears rushing attack scored three touchdowns and ran for 169 yards, which was more yards than either of the quarterbacks passed for in the contest.

The Bears have not defeated the Saints in more than a decade. Their last meeting came in 2017 when the New Orleans defense stifled Mitchell Trubisky to the count of 14-for-32 passing for 164 yards, no touchdowns and one interception.

The Bears have been victors in six of the last seven meetings with the Chargers. Jay Cutler was the quarterback when they last faced each other, and he threw for 345 yards with two touchdowns in the Bears’ 22-19 come-from-behind win at Qualcomm Stadium.

The least expensive average ticket price at Soldier Field is for the Bears’ contest against the Lions. In 2018, Matt Nagy got the better of Matt Patricia in their first two meetings as head coaches, as the Bears swept the season series from the Lions for the first time 2012.

The 2018 Giants struggled to the tune of a 5-11 record, but did defeat the Bears, 30-27, in overtime at MetLife Stadium. The Bears last hosted the Giants in 2013, which is the last time Chicago was victorious over the NFC East squad.

Jason Garrett’s heah coaching career against the Bears started poorly with two losses in back-to-back years, but his Cowboys have since gone 2-0 against Chicago. In the last meeting, Dak Prescott and the Cowboys defeated Brian Hoyer and the Bears, 31-17, at AT&T Stadium in 2016.

Andy Reid’s only contest against the Bears as the head coach of the Chiefs was in 2015 when the visiting Bears defeated Kansas City, 18-17. Chicago outscored the Chiefs, 15-0, in the second half of the contest. The Bears will hope to have the same success in their final home game of the season.

For sold out seats and events, TicketIQ has Low Price Guarantees on all events at Soldier Field for the Chicago Bears as well as Concerts. That means that if you find a secondary market ticket for less on a site like StubHub or Vivid Seats, we’ll give you 200% of the difference in ticket credit. TicketIQ customers save up to 25% compared to other secondary sites. TicketIQ also provides access to unsold face-value tickets for all events at Soldier Field  via Ticketmaster.

Premium Suites at Soldier Field consists of United Club, Executive Suites and Zurich Skyline Suites. United Club seats are located on the visitor's sidelines on the 200 and 300 Level of the Stadium. They offer access to a 3-floor lounge, 8 bars, and specialty food and drink. Executive Suites offer either a single-game suite purchase or a 2-game suite purchase. Single-game suites are located on the C Level and come with such amenities as 20 game tickets, VIP parking, and access to the United Club. Zurich Skyline Suite is located below the Executive suites and tickets include an all-inclusive experience. Tailgating is permitted in all open parking lots of Solider Field. Entrances in Solider Field can be secured through gates 0, 3, 4, 5, 9, 19, 31, 38, 45, 47, and 50 are open to the public.

WHERE CAN I FIND CHEAPEST TICKETS FOR SOLDIER FIELD

The Chicago Bears have unsold face-value tickets available for most games, which can be purchased directly through Ticketmaster. Prices may be above or below prices on the secondary ticket market. Many Concerts also have unsold tickets. For Sold Out Seats and Events, TicketIQ has Low Price Guarantees on all events at Soldier Field.  That means that if you find a secondary market ticket for less on a site like StubHub or Vivid Seats, we’ll give you 200% of the difference in ticket credit. TicketIQ customers save up to 25%.

Mobile tickets are required to enter home games at Soldier Field all season long. No paper tickets, print-outs or copies of barcodes will be accepted at the front gate. For those who do not have a smartphone, you can call the Bears Ticket office at 847-615-2327 or email them at ticket.office@bears.nfl.net.

Soldier Field offers other convenient services including wheelchair assistance, lost and found and wheelchair check in. All gates at Soldier Field are ADA accessible. A guest who needs to exchange his or her ticket for a wheelchair-accessible seat MUST enter the stadium through Gate 10.