Where To Buy 2019 Baltimore Ravens Tickets

Primary market single-game tickets for Ravens home games are available through the Ravens website via Ticketmaster. There are limited season ticket packages available, which start at $676.

To manage your Ravens tickets, the team has a mobile app available for iPhone and Android. The app can also be used for mobile entry into the venue. Screenshots of mobile tickets will not be allowed because secure digital tickets have a rotating bar code. There are also PSL owner cards, which have an RFID chip that allows entry into the stadium, and guests may use this card as well.

On the secondary market TicketIQ has Low Price Guarantees on Ravens tickets for all sold out games and tickets on the 2019 schedule, in addition to Low Price Guarantees on all NFL tickets. That means that if you find a secondary market ticket for less on a site like StubHub or SeatGeek, we’ll give you 200% of the difference in ticket credit. TicketIQ customers save an average of 5%-20% compared to StubHub and SeatGeek.

Premium seating for the Ravens is found on the club level, which recently completed a three-year, $120 million renovation. You can enjoy flat-screen TVs, eight full-scale bars, and an expanded menu on the club level. There is also a club level contest in which you can get on the field or win a framed authentic autographed Ravens jersey.

How Much Are 2019 Baltimore Ravens Tickets

Face value tickets are available for November 17’s Texans game, December 1’s 49ers game, and December 12’s Jets game for as low as $66 on the 500 level. Also, in the 500 level, there are $80 tickets against the Cardinals on September 15 for the home opener, the Browns on September 29, and the Bengals on October 13. There are three levels and the prices for each level are as follows:

Tickets for Ravens home games at M&T Bank Stadium on the secondary market are averaging $165, which ranks 23rd highest in the NFL. The Ravens average ticket price is 26% higher than last season’s price. The most expensive game on the schedule is their week 9 showdown with the Patriots. Tickets for that game start at $129 on the secondary market. With a $37 get-in price their week 6 game against Cincinnati is their cheapest game of the season. 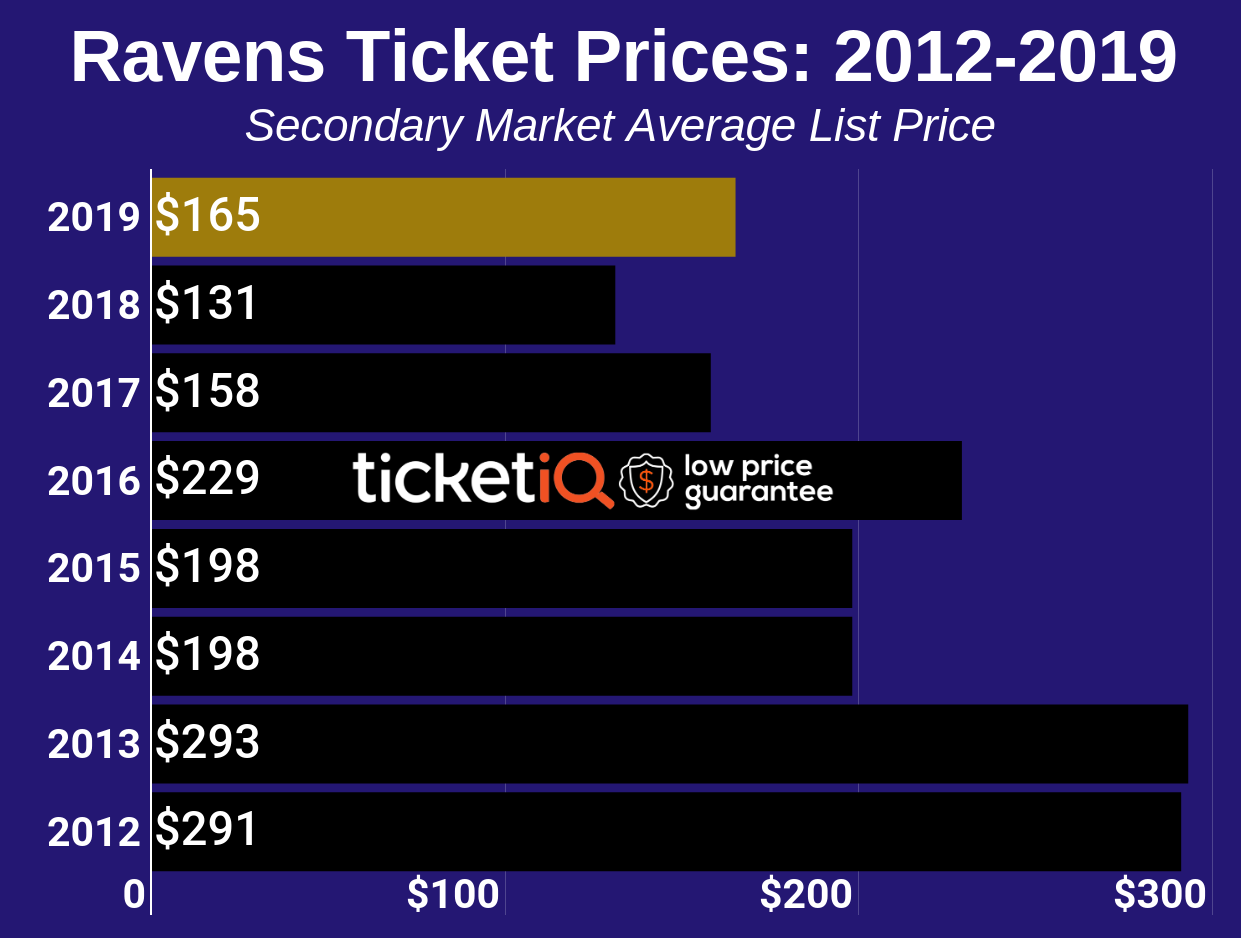 Prices For All Ravens Home Games On The 2019 Schedule

The Ravens have their home opener against the Cardinals, and John Harbaugh is looking to avenge the 2015 loss in Arizona. Baltimore’s 26-18 defeat at the hands of the Cardinals stopped a four-game Ravens win streak in meetings with Arizona.

The Browns, who acquired Odell Beckham Jr. during the offseason, are heading into Baltimore feeling confident about this season. However, Cleveland has just one win in its last seven tries against the Ravens.

The cheapest ticket this season at M&T Bank Stadium is against the Bengals. The two squads have split the season series each of the last three years. In the last meeting, Justin Tucker’s 24-yard field goal with 8:12 remaining won the contest.

The winner has alternated each of the last five contests between the Ravens and Texans. In 2017, Baltimore defeated the visiting Texans, 23-16, as Alex Collins and Javorius Allen each rushed for touchdowns.

The Ravens and 49ers will face each other for the second time since the Ravens won their second Super Bowl championship, 34-31, over San Francisco. In the most recent meeting at Levi’s Stadium in 2015, Baltimore made a fiery second half comeback, but it was not enough, as the Ravens fell, 25-20.

The Ravens had owned the series against the Jets until their last meeting. In 2016, Ryan Fitzpatrick and Geno Smith each threw for a touchdown and Matt Forte accumulated 154 total yards and two touchdowns, as New York stopped its eight-game losing streak to Baltimore. However, the Ravens are a perfect 5-0 at home all-time against the Jets.

The Ravens’ Week 17 matchup is against their rival Steelers, as Baltimore looks for its first home victory over Pittsburgh since 2016. The Ravens have allowed a combined 49 points in their last two home games against the Steelers.

Winners of the AFC North, and the team the best record in the NFL, the Baltimore Ravens clinched the division, a first-round playoff bye, and home field throughout the AFC playoffs. Baltimore will host the lowest winning seed from the Wild-Card round in a Division game on January 11.

The Ravens won the AFC North last year, but were eliminated by the Los Angeles Chargers in the wild-card round. That playoff appearance was the Ravens’ first after a three-year drought. Baltimore last won it all in Super Bowl XLVII, beating San Francisco, 34-31 -- the second time this decade Baltimore won a Super Bowl.

Where To Buy Ravens Playoff Tickets

Tickets for the Divisional game at M&T Bank Stadium are already available via Ticketmaster.

On the secondary market TicketIQ will offer fans a Low Price Guarantee on all Baltimore Ravens playoff tickets in addition to Low Price Guarantees on all NFL playoff tickets and Super Bowl tickets. That means that if you find a secondary market ticket for less on a site like StubHub or Vivid, we’ll give you 200% of the difference in ticket credit. TicketIQ customers save up to 25%.

How Much Are Baltimore Ravens Playoff Tickets

The average price of a Ravens ticket on the secondary market is one of nine that will cost fans $473, but is among the cheapest in the NFL. The priciest ticket is currently $632 for a Patriots Wild Card round game, followed by $569 for a 49ers Divisional game. The cheapest is $337 for a Green Bay Packers home game. If the current average holds, a ticket to this year’s Divisional game will be the priciest for any Wild-Card or Divisional game in Baltimore this decade. The next highest cost fans $352 for a Divisional game against the Houston Texans in 2012, and the cheapest was last year’s Wild-Game against the Los Angeles Chargers, which settled at $320. Below is a screenshot of inventory and get-in price by zone for the Ravens divisional round game: 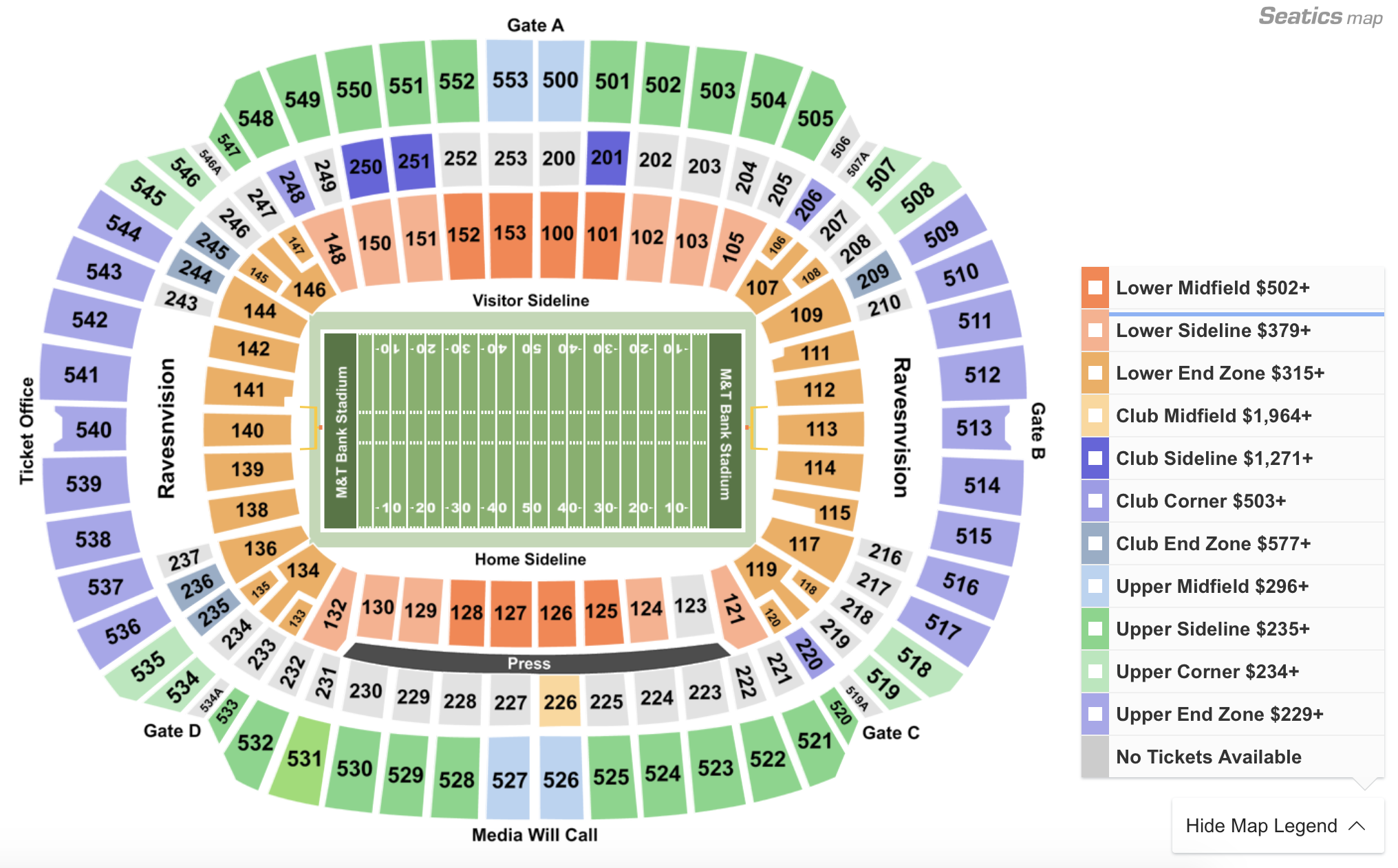 If the Ravens advance to the AFC Championship, and play at home, the current average asking price for that game is $1,015 on the secondary market.

For sold out seats, TicketIQ has Low Price Guarantees for Baltimore Ravens games and concerts at the M&T Bank Stadium. That means that if you find a secondary market ticket for less on a site like StubHub or Vivid Seats, we’ll give you 200% of the difference in ticket credit. TicketIQ customers save up to 25% compared to other secondary sites. TicketIQ also provides access to unsold face-value tickets for all events at M&T Bank Stadium via Ticketmaster.

Tailgating is permitted with parking passes in designated lots. Entrances: Gates A, B, C, and D, Media Gate, and Hamburg Gate are open to the public. There are two additional gates on the West side.

WHERE CAN I FIND CHEAPEST TICKETS FOR M&T BANK STADIUM

The Baltimore Ravens have unsold face-value tickets available for most games, which can be purchased directly through Ticketmaster. Prices may be above or below prices on the secondary ticket market. Many Concerts also have unsold tickets. For Sold Out Seats and Events, TicketIQ has Low Price Guarantees on all events at M&T Bank Stadium. That means that if you find a secondary market ticket for less on a site like StubHub or Vivid Seats, we’ll give you 200% of the difference in ticket credit. TicketIQ customers save up to 25%.

WHAT IS MOBILE TICKET POLICY AT M&T BANK STADIUM

Accessible seating for quests with disabilities is available throughout the stadium, on all three levels. Guests who require ADA accessible seating, including PSL Owners, should contact the ticket office at 410-261-RAVE to purchase those seats in advance