Primary market tickets for Mountaineers four home games are available through the West Virginia website via primary partner Paciolan. There are multiple choices of season ticket packages available, which start at $365. Mini plans start at $200 and are the only way to get tickets for Texas, which is also homecoming. The school is also offering a mobile pass, called the 304 mobile pass that starts at $249 for a mobile ticket for every game delivered within 24 hours of the game.

On the secondary market TicketIQ has Low Price Guarantees on West Virginia tickets for all games on the 2019 schedule, in addition to Low Price Guarantees on all college football tickets, which means that if you find a secondary market ticket for less on a site like StubHub or SeatGeek, we’ll give you 200% of the difference in ticket credit. TicketIQ customers save an average of 5%-20% compared to StubHub and SeatGeek.

How Much Are 2019 West Virginia Football Tickets

With Dana Holgorsen leaving for the Houston Cougars, former Troy head coach Neal Brown is taking over for the Mountaineers. Brown is coming off three consecutive bowl victories while West Virginia is on a three-bowl losing streak.

Tickets for West Virginia home games on the secondary market are averaging $138 at Mountaineer Stadium, which ranks 22nd highest in the nation. The Mountaineers’ most expensive home game this season is against the Texas Longhorns. 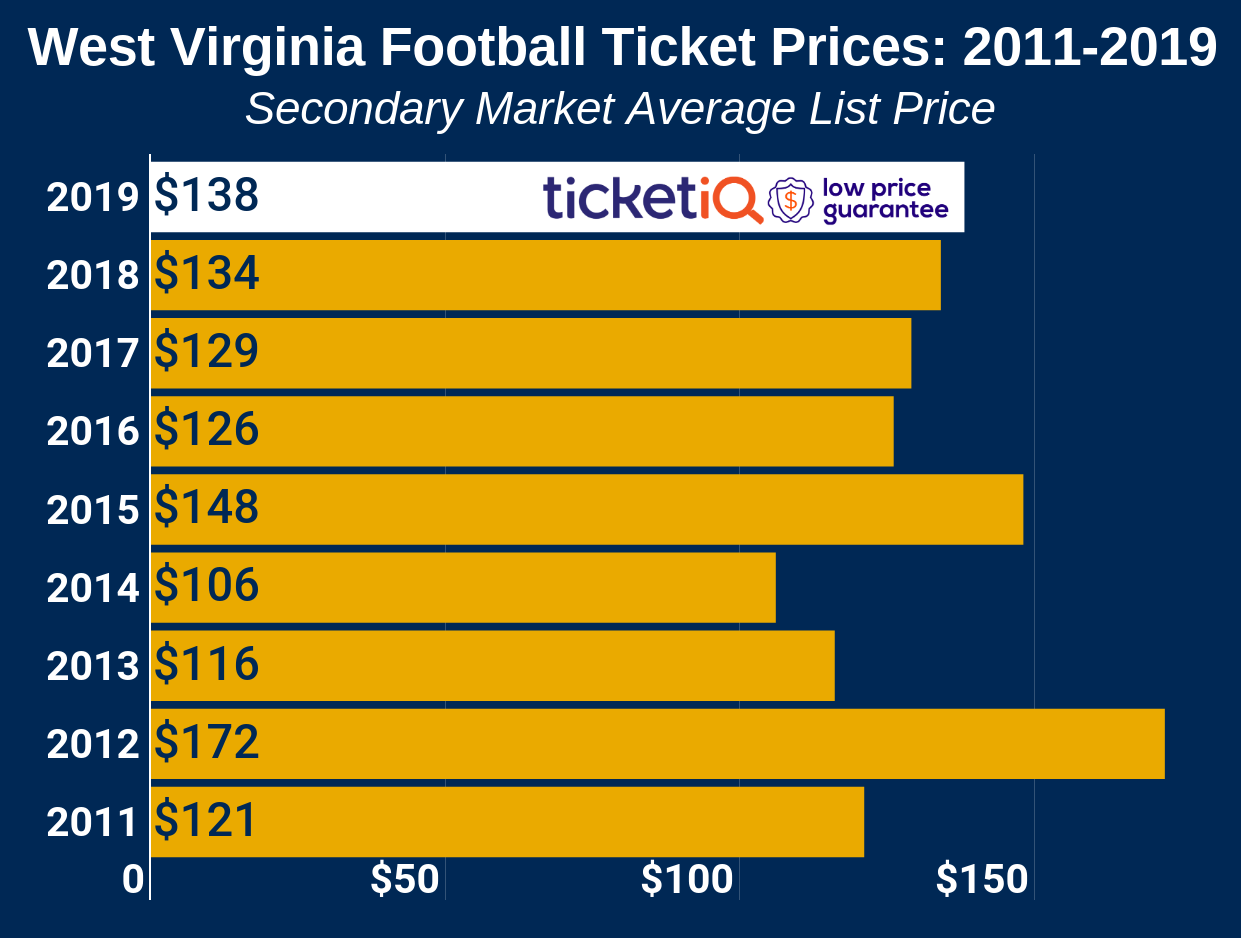 Prices For All West Virginia Home Games On The 2019 Schedule

The Mountaineers kick off their season on the last day of August against James Madison. The least expensive game of the season at West Virginia is the third matchup ever between the Mountaineers and Dukes. WVU looks to make their record 3-0 in meetings with JMU.

The Mountaineers and Wolfpack have faced each other just once since 1980. The Mountaineers were ranked 22nd in their last year with Bill Stewart when they fell to the Wolfpack, 23-7. West Virginia will seek revenge on September 14, as it attempts to stop a three-game losing streak against NC State.

The most expensive game at Mountaineer Field this season is against the Longhorns. Last season, West Virginia defeated Texas, 42-41, and this meeting was the third in a row that the road team was victorious.

West Virginia was victorious against Iowa State from 2014 to 2017, but the No. 6 Mountaineers fell at Iowa State, 30-14, on October 13, 2018. The Cyclones’ 244 rushing yards led them to their largest victory ever over the Mountaineers.

West Virginia has won each of the last five years against Texas Tech, including the 42-34 victory last year. The 2018 meeting was the first ever in which both teams were ranked: the No. 12 Mountaineers and No. 25 Red Raiders.

West Virginia has had difficulty against Oklahoma State, as the Mountaineers have dropped the last four contests. West Virginia scored 41 points in its four-point loss to the Cowboys last season.