Where To Buy Washington Football Tickets

Primary market tickets for Washington home games are available through the Washington website. There are multiple choices of season ticket packages available, and seats start at $225 for the “General Season Ticket Package,” which allows fans to pick their own seats and doesn’t require a per-seat gift to the school. Also available is the digital-only “Husky Pass,” where fans get tickets delivered to their phones and have a different seat location for every game. This package costs $249.

On the secondary market TicketIQ has Low Price Guarantees on Washington football tickets for all games on the 2019 schedule, in addition to Low Price Guarantees on all college football tickets, which means that if you find a secondary market ticket for less on a site like Stubhub or Seatgeek, we’ll give you 200% of the difference in ticket credit. TicketIQ customers save an average of 5%-20% compared to Stubhub and Seatgeek.

How Much Are Washington Football Tickets

Washington wastes little time before getting into its Pac-12 schedule, when it plays Cal in the second home game of the season. But the priciest game at Husky Stadium will be in the in-state rivalry game against Washington State on November 29.

Tickets for Huskies home games are at an all-time high on the secondary market. The $165 average asking price is $70 more than last season’s $90, and follows a season during which Washington tied for first in the Pac-12 North and got to the Rose Bowl before losing to Ohio State, 28-23. The second most expensive season of the decade was 2013, when fans paid an average of $151. That season was the last of the Steve Sarkisian era. 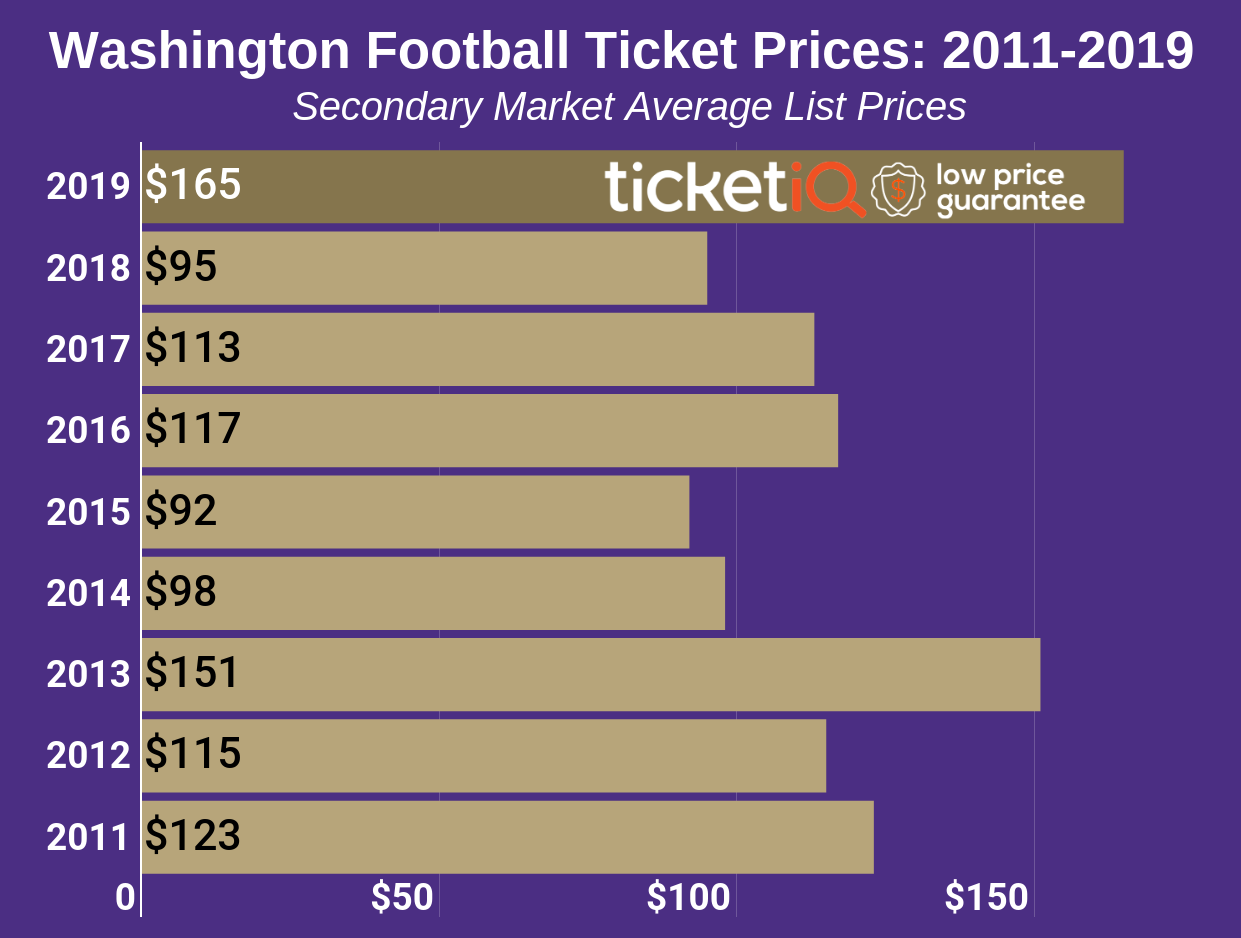 One of the two cheapest games of the season, Washington and Eastern Washington will play for just the third time, and Washington has won the last two … but just barely. An interception cemented the win in 2014 and Washington won, 59-52, in 2011.

The first Pac-12 game at Husky Stadium this year, former Washington defensive coordinator Justin Wilcox will be on the Cal sideline. The teams have played 94 times dating to 1904. Washington holds a 54-40 all-time series advantage, but the Bears beat the Huskies at Strawberry Canyon in a 12-10 defensive battle last year on October 27, 2018. That win snapped a two-game Huskies’ winning streak.

One of the two cheapest games of the season, Hawaii will play at Husky Stadium for the first time since 2011. The teams have played five games dating to 1938, with three of those in the 2000s. Washington holds a 3-2 all-time series advantage, and has won the last two.

This game kicks off the Pac-12 season in earnest, and is the highest priced of the first four games of the season, and the third most expensive overall. Washington and USC have a long history dating to 1923, but have not played since 2016, when USC beat the Huskies, 26-13, on November 12, 2016. USC has a 51-29 all-time series advantage.

Among the longest running football rivalries, this game attracts fans from both teams, as only 285 separate the campuses. The game is the second most expensive on the secondary market in terms of average asking price and get-in price. Washington holds a 60-46-5 all-time series advantage, but Oregon won, 30-27, in overtime on October 13, 2018.

The second cheapest of the Pac-12 games behind the Cal game, this game is a rematch of the 2018 Pac-12 Championship, which Washington won, 10-3, on November 30, 2018. The teams played six times prior to 2011, and as far back as 1931. They’ve played regularly since 2011, and Washington is currently on a four-game win streak after winning last season’s regular-season meeting, as well.

This biggest game of the year at Husky Stadium is also the priciest on the secondary market. Known as the “Apple Cup,” this game dates to 1900, and Washington has dominated, winning 73 of 111 meetings, including last season’s 28-15 victory on November 23, 2018 at Martin Stadium. The Washington State governor presents the trophy at the end of the game.