Single-game tickets and mini plans are not yet on sale on the primary market.

On the secondary market TicketIQ has Low Price Guarantees on USC football tickets for all games on the 2019 schedule, in addition to Low Price Guarantees on all college football tickets, which means that if you find a secondary market ticket for less on a site like Stubhub or Seatgeek, we’ll give you 200% of the difference in ticket credit. TicketIQ customers save an average of 5%-20% compared to Stubhub and Seatgeek.

How Much Are USC Trojans Football Tickets

As USC and the Los Angeles Coliseum prepare to unveil major renovations to the venerable venue this fall, demand for USC football tickets is at its highest of the decade. Despite having a losing season in 2018, fans have driven tickets on the secondary market up to $223, from $144 last season. The next highest average was $160 in 2017, a year after the Trojans went 10-3 and got to the CFP semifinal Rose Bowl. They went 11-3 in 2017, but lost in the Cotton Bowl. 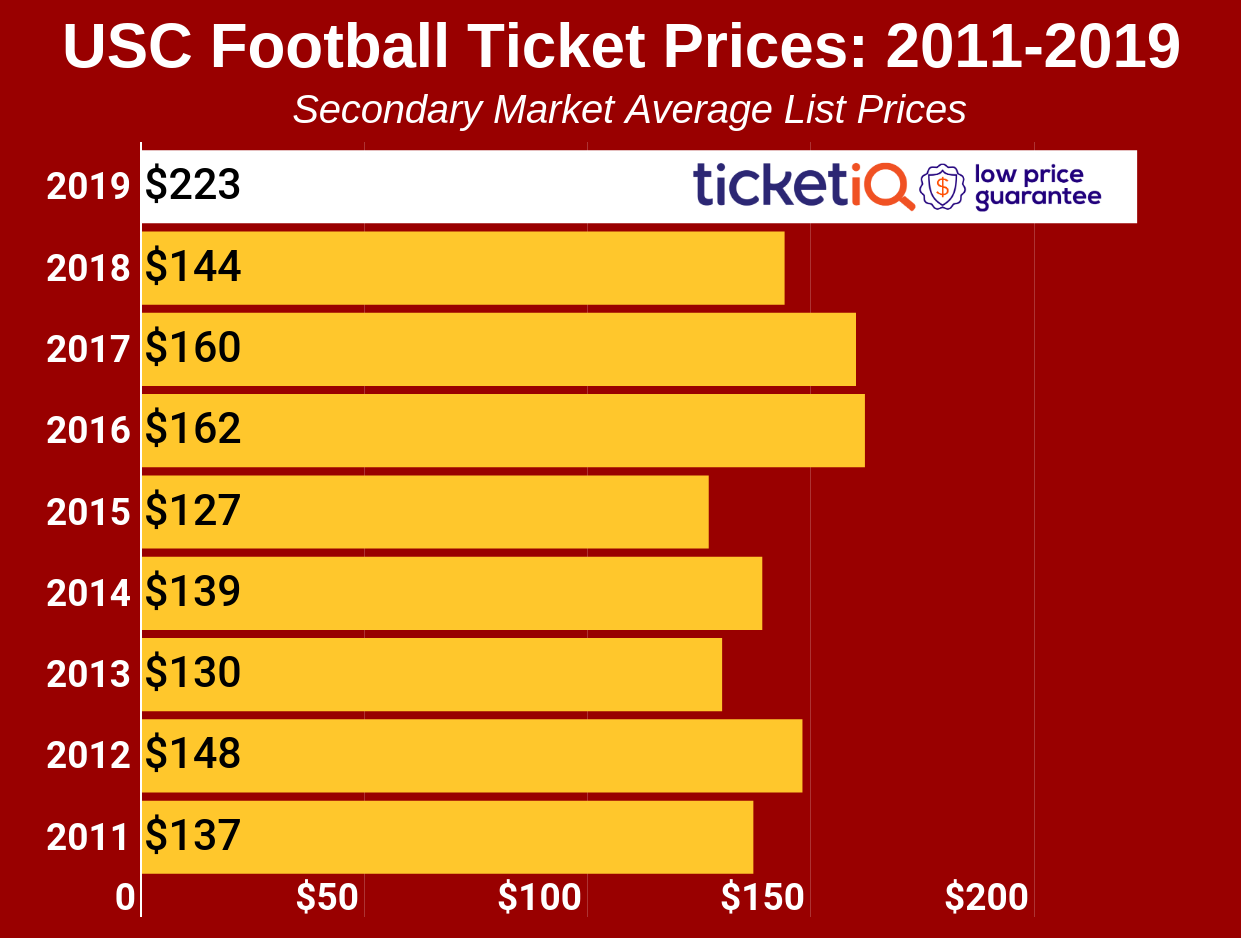 The highest average asking price across the NCAA is $487 for a ticket to see the Georgia Bulldogs play at home.

Key to the renovation and the price spike on the secondary market is that L.A. Coliseum, traditionally one of the bigger college football venues, will have fewer seats – down from 93,000 to about 77,500. Among the new features will be updated seats and WiFi. In addition to the renovation, L.A. Coliseum will undergo a name change, as USC has partnered with United Airlines.

This will be the only non-conference game at the Coliseum, and is the cheapest of all the home games. USC and Fresno State have played four times, including twice in bowl games. The last regular-season meeting was on August 30, 2014, and USC won, 52-13. Fresno State has won only once, in 1992, at the Freedom Bowl in Anaheim.

This game is the third most expensive of the Pac-12 games, and one of three home games this season with an average asking price of $200 or more. The rivalry dates to 1905 and USC has a 61-33-3 all-time series advantage, though Stanford won the last game, 17-3, on September 8, 2018 at Stanford.

It must be no fun for the Wildcats to go to Los Angeles – they’ve lost six consecutive and the Trojans hold an all-time 33-8 series advantage. This game is the second least expensive of the season and cheapest of the Pac-12 games.

Last time around, USC snapped Oregon’s two-game win streak, and this season, the Oregon game is trending as the priciest at the L.A. Coliseum. The Trojans beat Oregon, 45-20, on November 5, 2016, also in Los Angeles.

The second most expensive home game of the season, the USC-UCLA rivalry is glitzy cross-town affair pits two universities that are only 12 miles apart, and the winner is awarded the Victory Cup. The rivalry dates to 1929, and USC holds a 47-32-7 all-time series advantage, though UCLA won at the Rose Bowl, 34-27, on November 17, 2018.

USC Trojans Bench: The bench is located in front of Sections 121 and 122.

Visitor Bench: Visitor team sit in front of Sections 107 and 106.

WHERE CAN I FIND CHEAPEST TICKETS FOR LA COLISEUM

The USC Trojans and the Los Angeles Rams have unsold face-value tickets available for most games, which can be purchased directly through Ticketmaster. Prices may be above or below prices on the secondary ticket market. Many Concerts also have unsold tickets. For Sold Out Seats and Events, TicketIQ has Low Price Guarantees on all events at Center. That means that if you find a secondary market ticket for less on a site like StubHub or Vivid Seats, we’ll give you 200% of the difference in ticket credit. TicketIQ customers save up to 25%.

NFL no longer supports home printed tickets for football leagues. You can buy mobile-only tickets either through the free Rams and USC mobile apps, Rams Account Manager on mobile web, or the Ticketmaster app. Through the Rams app you can download your tickets as well as manage your tickets – resell, forward or transfer.

LA Coliseum offers other convenient services including wheelchair assistance, lost and found and wheelchair check in. For guests who wish to transfer to a seat from their wheelchair, the seating arena will store the wheelchair at Guest Services on the 104-109 and 213-224.