Where to Buy 2019 UCLA Football Tickets

UCLA football tickets went on sale July 17th via primary partner Ticketmaster and are available for all games at the Rose Bowl on the 2019 UCLA schedule.  Face value ranges from $30 for games against San Diego State, Oregon State, Colorado, Arizona State and Cal. Only the Oklahoma game starts at a higher prices, with the cheapest face value going for $69.  That's about 20% less expensive than the secondary market, which means that buying directly from the team is the best option for the highest-demand game of the season.

For this season, the school has also introduce The Blue Zone, a $149 all-mobile ticket option to get a ticket to every 2019 regular season home games, in different locations across sections 7-L to 2-H, which are on the visitor side. While some of the Blue Zone is in the higher rows, first 10-15 rows are also part of the program.

UCLA is also offering a mini plan called the Big Game plan, which costs $149 and includes ticket for the Oklahoma, Arizona State and Cal games. At current secondary-market prices, the Big Game Plan saves fans about 20% compared to buying each game separately on the secondary market.

The other important option to keep in mind is TCL club memberships, which are available for $300 for the whole season or $60 for each game. The TCL club is located on Level D, with some great views, and access to food and a full cash alcohol bar, a rarity for college football games. It also provides access to the new Stella Rosa Wine Garden.

TicketIQ has Low Price Guarantees on UCLA football tickets for all sold out tickets in 2019 schedule, in addition to Low Price Guarantees on all college football tickets, which means that if you find a secondary market ticket for less on a site like StubHub or Vivid Seats, we’ll give you 200% of the difference in ticket credit. TicketIQ customers save an average of 5%-20% compared to StubHub and Vivid Seats.

How Much Are 2019 UCLA Football Tickets

Coming off his first season at UCLA, Chip Kelly continues his quest to turn around the storied program The Bruins went 3-9 last season, but the offense steadily improved as the season wore on. Expect more of the same this year, with real change likely coming in 2020. The average asking price for  UCLA home game on the secondary market, according to TicketIQ, is $141, up from $107 in 2018. A Bruins ticket is the 20th most expensive across the NCAA, with Georgia’s $487 average asking price ranking No. 1. 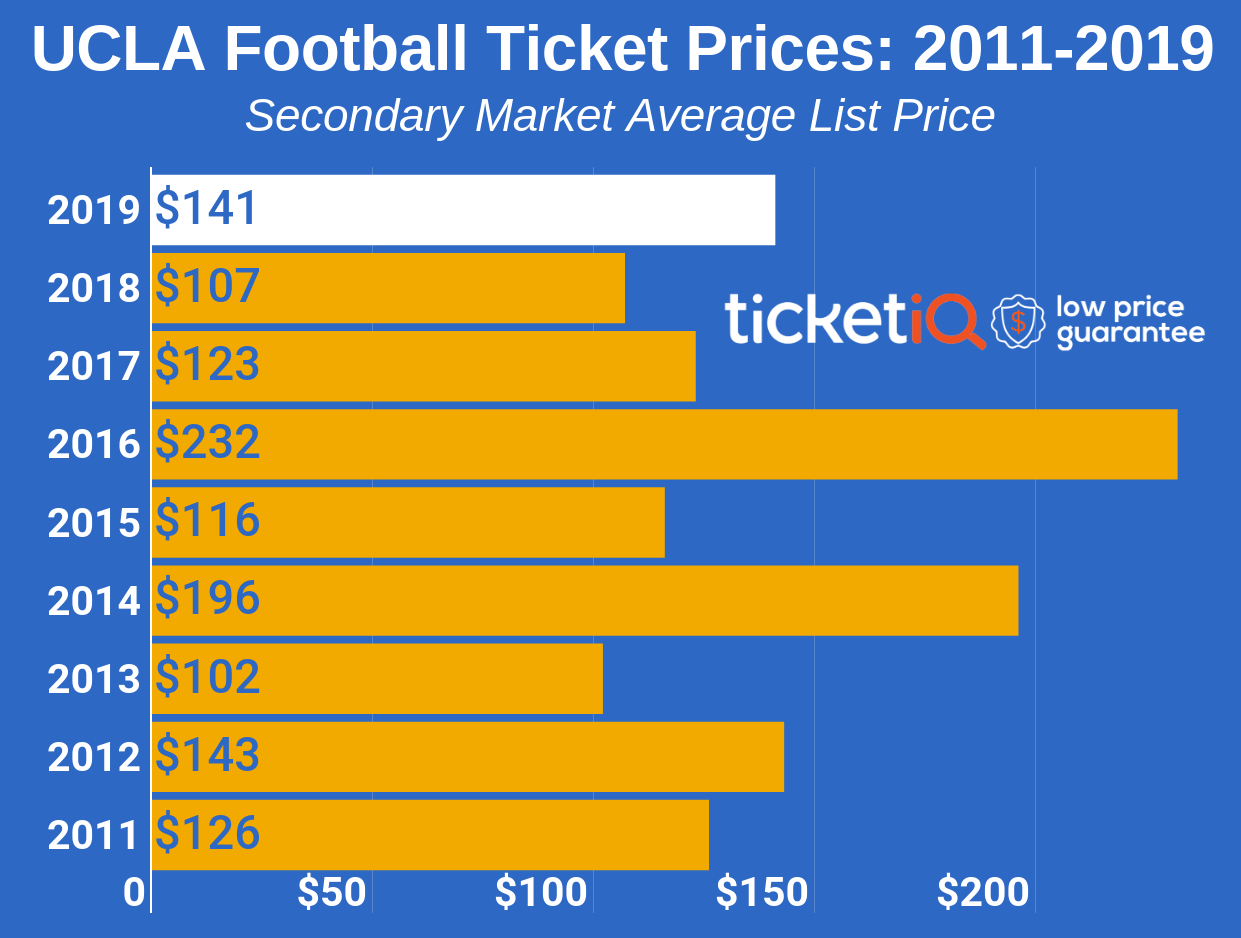 Ticket Prices of All UCLA Home Games on the 2019 Schedule

The Bruins play their home games at the venerable Rose Bowl and will have six home dates in 2019.

For the first time in 10 years, UCLA will host its neighbor to the south, San Diego State, this time in the first home game of the season. The Aztecs are 0-21 against UCLA, including losing, 33-14, when the teams last played. The game is the first of two in a home-and-away series. ULCA will visit San Diego State on September 19, 2020.

The priciest game of the season by far, at least in terms of the secondary market get-in price, this game marks the fifth time these teams will meet, and Oklahoma has a 4-1 all-time series advantage. The Sooners won the last meeting in Norman, 49-21, on September 8, 2018. The team will give away Troy Aikman coins at this game.

The first Pac-12 home game of the season, this rivalry dates to 1930. The teams last met in 2016, and UCLA won, 38-24. The Bruins hold a 42-16-4 all-time season series advantage, including winning the last two. This game has the cheapest average asking price of all UCLA home games.

The second cheapest home game of the season, ASU and UCLA have played every year since 2003 and the rivalry dates to 1976. The Sun Devils won last season’s meeting, 31-28, at Tempe, and have won three of the last four.

After winning five consecutive between 2011-15, the Bruins and Buffaloes have alternated wins in each of the last three seasons. Colorado won on September 28, 2018 at Boulder. UCLA holds a 10-4 all-time series record. This game is a rare late-season non-conference matchup.

This rivalry is the third-oldest uninterrupted rivalry across the NCAA, and since both teams are nicknamed the Bears, the game is sometimes called the “Bear Bowl.” ULCA leads the all-time series, 55-33, and has won the last two, including winning 37-7, last season at Berkeley.

For sold out seats, TicketIQ has Low Price Guarantees on all events at the Rose Bowl for the UCLA Bruins, the Rose Bowl as well as Concerts. That means that if you find a secondary market ticket for less on a site like StubHub or Vivid Seats, we’ll give you 200% of the difference in ticket credit. TicketIQ customers save up to 25% compared to other secondary sites. TicketIQ also provides access to unsold face-value tickets for all events at Rose Bowl via Ticketmaster.

Sections Field A1, Field A2, Field A3 and Field A4 are a part of Floor Seating, which offer some of the closest views of the performers. With bowl seating, there are 77 rows and they are found in Sections 1, 2, 10, 13 to 16, 21 to 24, and 27. Student seats are located on the Bruins' side. With bowl seating, there are 77 rows to choose from and these seats are reserved for university students. They are found in Sections 7 to 9. The lower bowl consists of rows 1 to 25 while upper bowl consists of rows 28 to 55 and 56 to 77. The 10 level sections range from Section 1 to 28 where each section has rows A-K and 77 seats each.

WHERE CAN I FIND CHEAPEST TICKETS FOR ROSE BOWL

The UCLA Bruins have unsold face-value tickets available for most games, which can be purchased directly through Ticketmaster. Prices may be above or below prices on the secondary ticket market. Many Concerts also have unsold tickets. For Sold Out Seats and Events, TicketIQ has Low Price Guarantees on all events at Rose Bowl. That means that if you find a secondary market ticket for less on a site like StubHub or Vivid Seats, we’ll give you 200% of the difference in ticket credit. TicketIQ customers save up to 25%.

Rose Bowl has prohibited mobile-only and scan-only tickets in UCLA bruins game. Rose Bowl only permits entry through online tickets which you can either purchase from Rose Bowl Box Office or Ticketmaster.

Rose Bowl offers other convenient services including wheelchair assistance, lost and found and wheelchair check in. For guests who wish to transfer to a seat from their wheelchair, Rose Bowl will store the wheelchair at Guest Services on different rows and levels.