Primary market tickets are available through the 12th Man Foundation, and there are many different types of tickets and packages available. Single-game tickets via primary market partner Paciolan for non-conference games against Texas State, Lamar and UT-San Antonio start at $50 while tickets to see Alabama start at $125. For all games, single-game tickets are in the 300 and 400 upper endzone sections. Season-ticket packages start as low as $300 in the same sections.

On the secondary market TicketIQ has Low Price Guarantees on Texas A&M football tickets for all games on the 2019 schedule, in addition to Low Price Guarantees on all college football tickets, which means that if you find a secondary market ticket for less on a site like StubHub or SeatGeek, we’ll give you 200% of the difference in ticket credit. TicketIQ customers save an average of 5%-20% compared to StubHub and SeatGeek.

How Much Are 2019 Texas A&M Football Tickets?

Texas A&M plays in one of the toughest college football conferences in the nation. Alabama is always in the national title conversation, but since joining the SEC in 2012, the Aggies haven't had a losing season. Jimbo Fisher is starting his second season, and enthusiasm is high. Demand on the secondary market for Tickets at Kyle Field has pushed the average asking price up $55 compared to 2018 on TicketIQ.com. The $195 average asking price ranks No. 13 among NCAA teams. The Aggies got their first bowl win in four seasons last year and at 9-4, had their best season since 2013.

The Aggies have seven home dates at Kyle Field plus a "home" game at Dallas' AT&T Stadium, and it's no surprise that fans will pay premium when the Tide comes to town -- tickets for that game start at $179 on the secondary market. But all the non-conference games can be had for $59 or less. 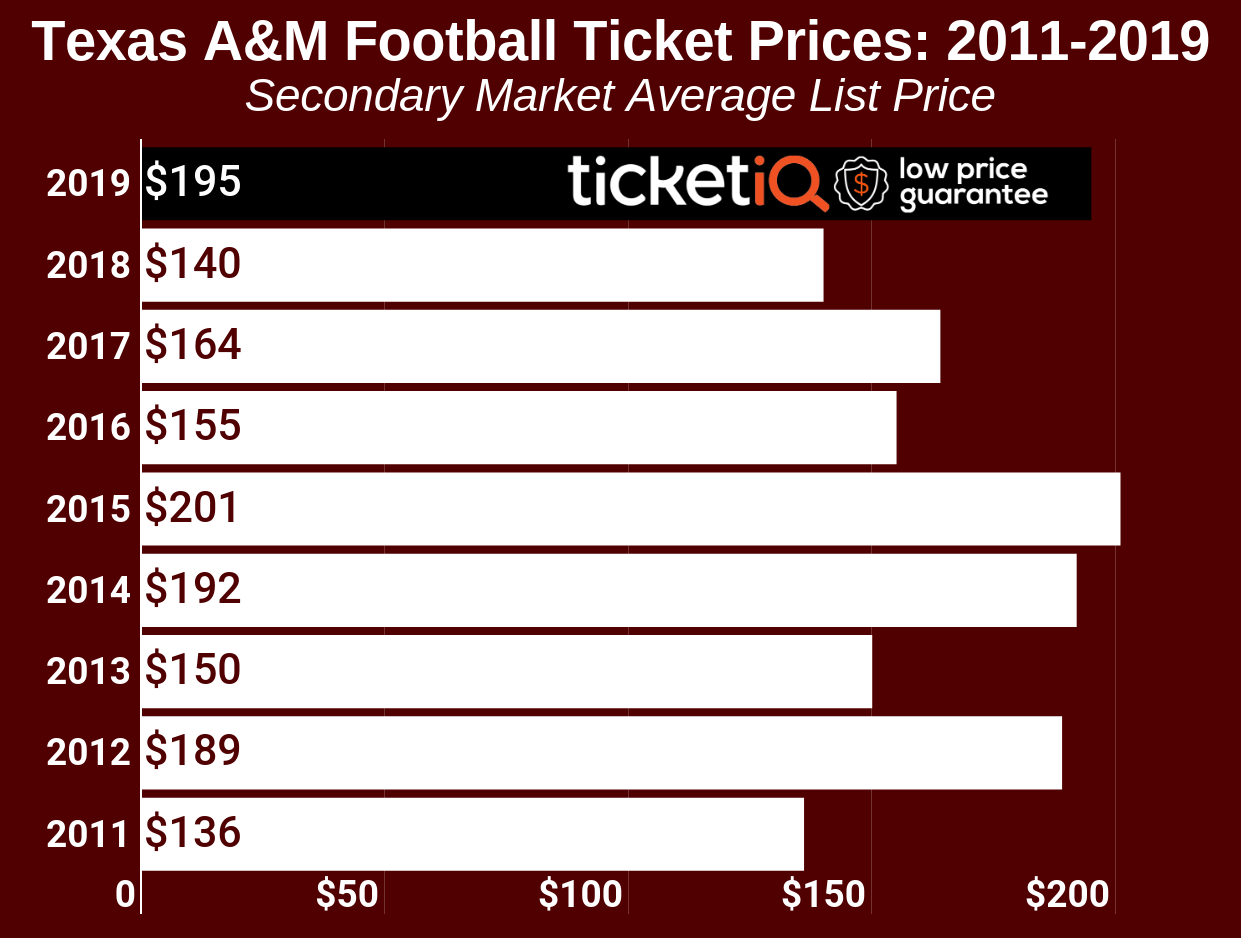 Secondary Market Prices For All Aggies Home Games On The 2019 Schedule:

After playing in 1919, it was 86 years before these teams met again. The gap between games isn’t quite as long this time around – they last played in 2005. Texas A&M has won both games. This game is the second cheapest at College Station and one of three that fans can get into for less than $60.

The only FCS team Texas A&M will play at home, Texas A&M and Lamar have not met previously. The game is one of three against in-state non-conference competition throughout the season. For Lamar, the game is the only one this season against a Power-5 conference team, and the Cardinals will take home a nice payout, if nothing else. This game is the least expensive in terms of average asking price and get-in price on the secondary market.

The official start of Texas A&M’s SEC season is also the third priciest game on the secondary market. Though this series started in 1911, the teams have played only nine times, with Texas A&M winning the last two. Since Texas A&M joined the SEC in 2012, Auburn has won four of the last six, including a 28-24 victory on November 3, 2018. This game is the third most expensive of the season.

The second priciest game of the season on the secondary market, this game is branded as the “Southwest Classic” and has taken on additional weight since the Aggies joined the SEC in 2012. The game will played at AT&T Stadium in Dallas, but is considered an A&M home game. The teams have played 75 times dating to 1903, and Arkansas holds a 41-31-3 all-time series advantage, though Texas A&M has won the last seven, including a 24-17 victory September 29, 2018.

Playing Alabama at home is a marquis game for any team, and Texas A&M is no different. The $442 average asking price is the highest of the season at College Station. These teams have played 11 times and Alabama dominates the all-time series, 9-2, including winning the last six. Texas A&M beat the Tide 29-24 in 2012, its first season in the SEC. But since then, it’s been all Alabama.

This in-state game will give the Aggies a little bit of a break from their stiff SEC competition. Texas A&M and UTSA have played only once before, in 2016, when the Aggies won, 23-10. The game is the third cheapest at College Station this season, and will give fans a great late-season opportunity to see the Aggies at home for a good price.

Though this series only started in 2014, it comes complete with a trophy, and is called the “Battle for the Bonham Trophy.” James Butler Bonham was a South Carolina graduate who died at the Battle of the Alamo. Texas A&M has won all five meetings, including a 26-23 victory on October 13, 2018. This game is the fourth priciest of the season, and is one of four with an average asking price of $200 or more.