Sorry! There are currently no tickets available for Tennessee Volunteers Football.

Where To Buy Tennessee Football Tickets

Tennessee has a rich football history, but the 21st century hasn’t been kind to the Volunteers. Tennessee has had eight losing seasons since the turn of the century, but that could present a great opportunity for fans looking for a well-priced ticket to a Tennessee home game.

According to secondary ticket marketplace TicketIQ.com, the average asking price for a ticket to Neyland Stadium is $128, putting them just outside the top 25 priciest ticket in the NCAA. That average is up from $116 in 2018, which translates to a 17% increase on the Secondary ticket market for the 2019 schedule at Neyland Stadium. Single game tickets will go on sale Tuesday, July 16, at AllVols.com. 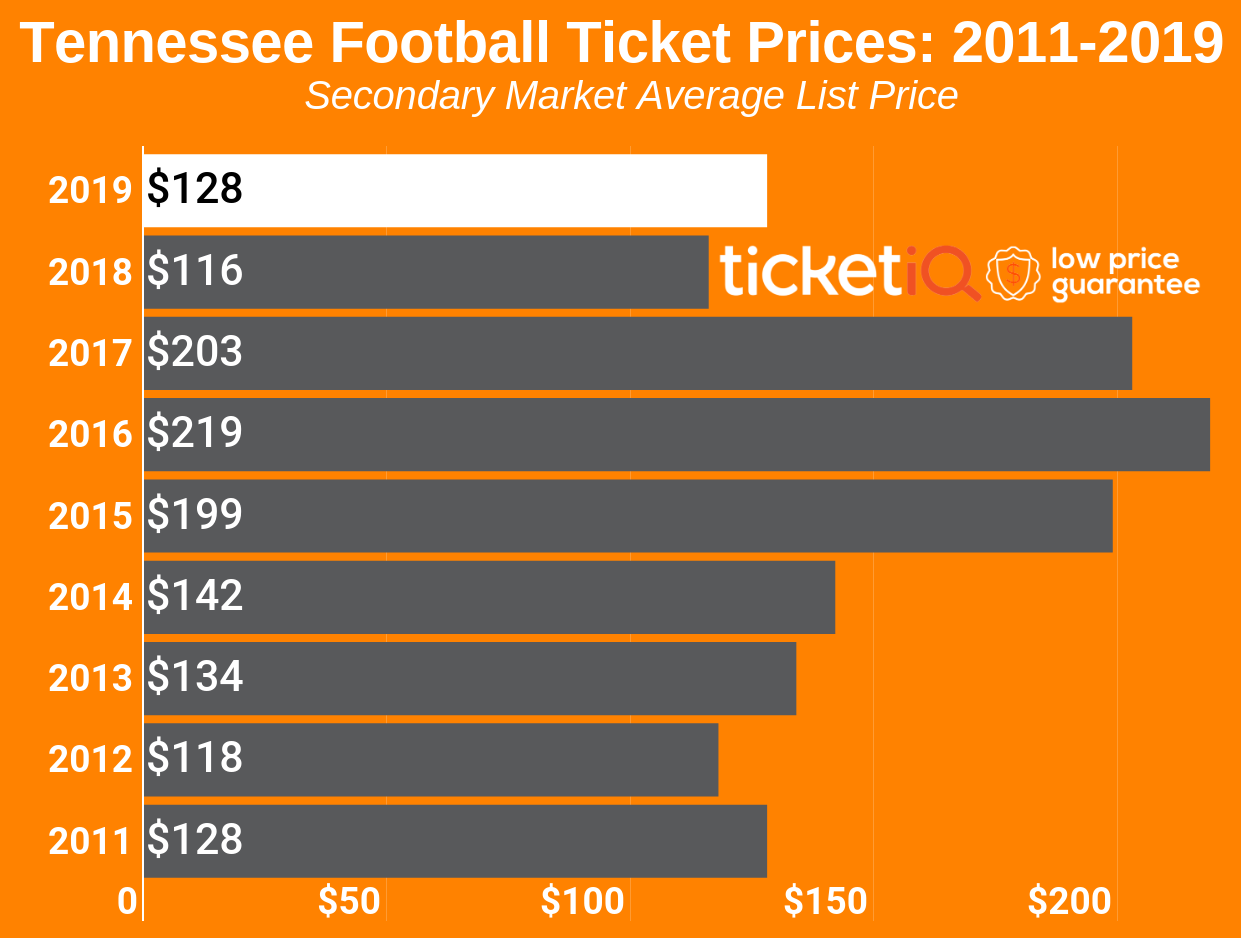 Tennessee has plenty of positives that could translate into a winning season in 2019 – Jarrett Guarantano returns as quarterback, Jeremy Pruitt has a season under his belt as head coach, and the Vols’ schedule is a little softer than in years past. Tennessee will play eight home games, including its first against independent Brigham Young. Home games will be played at Neyland Stadium. Below is a look at Tennessee’s home games on the secondary ticket market. TicketIQ also has Low Price Guarantees on all Tennessee Football tickets, which means that if you find a secondary market ticket for less we’ll give you 200% of the difference in ticket credit. TicketIQ customers save up to 25% compared to Stubhub and Vivid Seats.

How Much Are Tennessee Football Tickets

This game has the second cheapest average asking price and second cheapest get-in price on the secondary market, and no wonder – the teams have virtually no history. They’ve played once, in 2012, at Tennessee’s Neyland Stadium – and Tennessee won that game, 51-13. But it’s the season opener, and a great opportunity for fans to see the Vols at a low price.

These teams have never played before. BYU has been playing as an independent since 2011, and in 2017 scheduled a home-and-home series with Tennessee. The second game will be at BYU in 2023, and neither team will get compensation from the other for either game.  This game is the fourth priciest in terms of average asking price on the secondary market.

This in-state rivalry dates to 1907, and Tennessee has dominated, winning 28 of 31 meetings. The Vols are on an eight-game win streak, including a 45-10 victory during the teams’ last meeting on October 11, 2014. Tennessee has never lost at home against Chattanooga. This game is the third cheapest  on the secondary market in terms of both average asking price and get-in price.

Tennessee kicks off its SEC home schedule against one of its most fierce conference rivals, and demand reflects the enthusiasm around the game. The average asking price on the secondary market is the highest of any game this season. The series is currently tied at 23-23-2, and Georgia has won the last two, including a 38-12 victory at Athens on September 29, 2018.

This rivalry also dates to 1907, but isn’t quite as even at the Georgia rivalry – Tennessee holds an all-time series advantage of 28-16-1, but Mississippi State snapped a six-game Tennessee winning streak during their last meeting, when it beat the Vols, 41-31, at Starkville on October 13, 2012. In terms of secondrary market ssee average asking price, this is the third priciest game at Neyland Stadium.

Dating to 1903, this rivalry has traditionally been one of streaks – and one that Tennessee dominated – until 2010, anyway. Prior to that, the Vols won all but six (four losses, two ties) of 28 games. Since then, South Carolina won three, then Tennessee won three, then South Carolina won three. Which might mean Tennessee is due to win. The average asking price for this game is the second highest of the season on the secondary market, behind only the Georgia game.

The cheapest game of the season at Neyland Stadium, the Vols and UAB have played only four times, and Tennessee has won all four meetings. The last game, on September 25, 2010, was the closest of the bunch, 32-29. The game extends UAB’s latest tradition of playing SEC teams to three seasons.

Both founding members of the SEC, Tennessee and Vanderbilt first played in 1892 – and twice that season with Vanderbilt winning both games. Including those two games, the teams have met 112 times with Tennessee holding a 75-33-5 all-time series advantage, though Vanderbilt has won the last three. The game is the fifth priciest of the season on the secondary market, and will be the Volunteers final home game of the season.

For sold out seats, TicketIQ has Low Price Guarantees for Tennessee Volunteers games and all events at the Neyland Stadium. That means that if you find a secondary market ticket for less on a site like StubHub or Vivid Seats, we’ll give you 200% of the difference in ticket credit. TicketIQ customers save up to 25% compared to other secondary sites. TicketIQ also provides access to unsold face-value tickets for all events at Neyland Stadium via Ticketmaster.

Upper Deck are located above the Lower Level in Sections AA to FF.

Tailgating is allowed in the stadium parking lots, but must take place directly behind your vehicle.
Entrances: Gates 19 and 26 are for club and box members. Gates 4, 4A, and 23 are for students.

Tennessee Terrace are located above the Lower Level in Sections T2 to T7 and members are provided with extra amenities, such as more comfortable seating, expanded concessions, access to an indoor concourse, and preferred parking. East Club are located above the Upper Level and offer views from the visitors' sideline. Club members are provided with luxury amenities, such as club access, all-inclusive buffets, covered outdoor seating, and VIP parking.

West Club seats are located above the terrace and offer views from the Volunteers' sideline. Club members are provided with the same luxury amenities as the East Club. Neyland Skyboxes suites are located on the highest levels on the West and East sides of the stadium. They offer views from the sidelines and skybox members are provided with luxury amenities, such as an upscale buffet, VIP parking, a wet bar, and TVs. Boxes can seat up to 16 fans.

WHERE CAN I FIND CHEAPEST TICKETS FOR NEYLAND STADIUM

The Tennessee Volunteers have unsold face-value tickets available for most games, which can be purchased directly through Ticketmaster. Prices may be above or below prices on the secondary ticket market. Many Concerts also have unsold tickets. For Sold Out Seats and Events, TicketIQ has Low Price Guarantees on all events at Neyland Stadium. That means that if you find a secondary market ticket for less on a site like StubHub or Vivid Seats, we’ll give you 200% of the difference in ticket credit. TicketIQ customers save up to 25%.

Tickets for most events are purchased through Ticketmaster online or in-person. The sale/resale of tickets is strictly prohibited on stadium property, including the parking lots. The Athletics Ticket Office is open from Monday-Friday, 8:30am-5:00pm ET.  You may contact directly at (865) 656-1200.

Neyland Stadium  offers other convenient services including wheelchair assistance, lost and found and wheelchair check in.  Limited wheelchair accessible and companion seating is located in the North end zone.