How To Find The Cheapest Cotton Bowl Tickets (Florida vs Oklahoma) 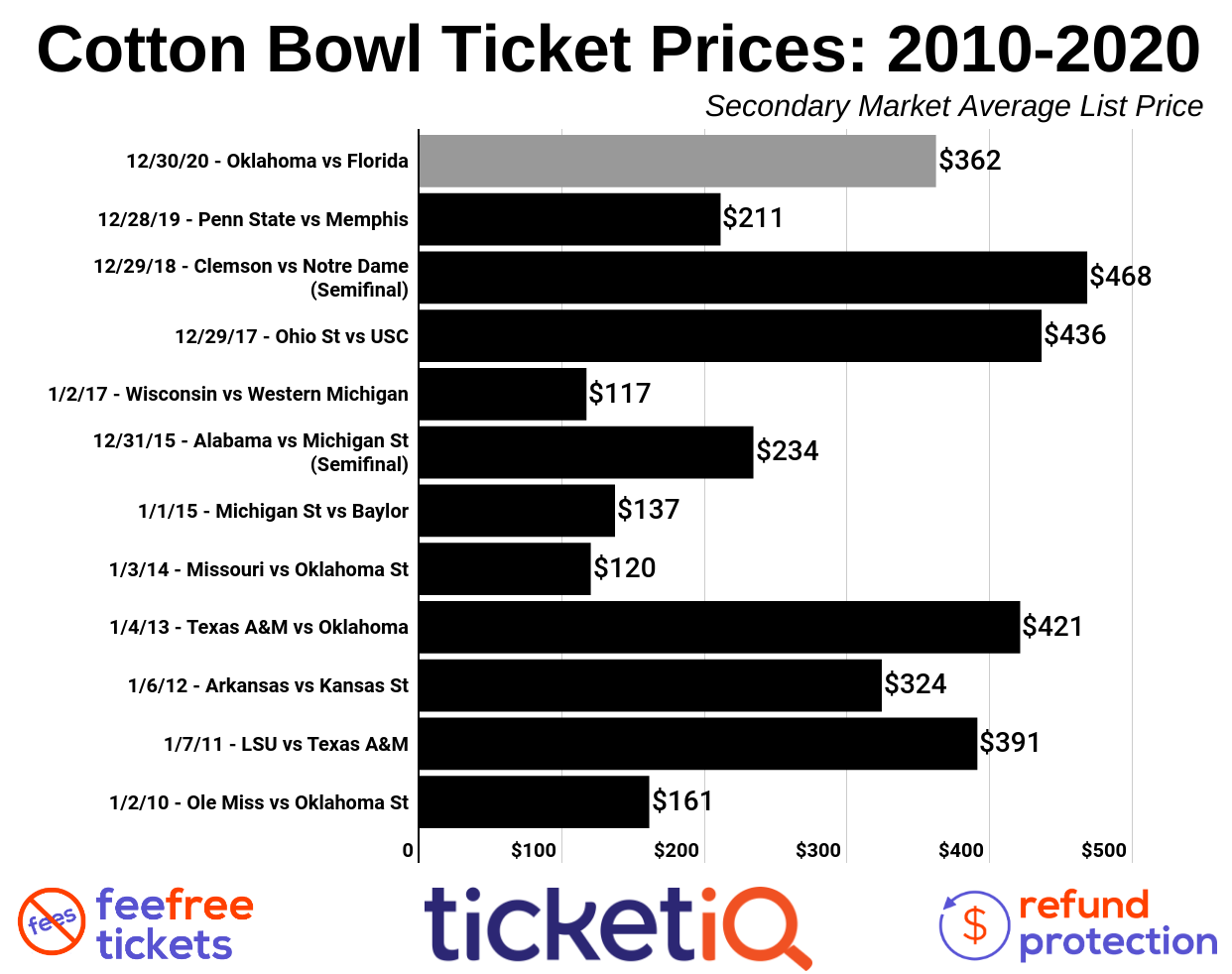 The 2020 edition of the Goodyear Cotton Bowl features No. 7 Florida Gators vs. No. 6 Oklahoma Sooners at Arlington’s AT&T Stadium. The game, set for December 30th, will be played with attendance at AT&T Stadium limited to 16,000 fans. This will be the third trip to the Cotton Bowl for Oklahoma and the first for Florida.

Single-game tickets on the primary market for the Texas rivalry between Texas and Baylor on Saturday are sold out. For those wanting a seat inside McLane Stadium, TicketIQ has availability.

Secondary market tickets are also limited, but prices start at $119 in the North End Zone in Section 316, and general-admission seats on the Berm are available starting at $59. On the 200 Level, seats remain on the Texas side for between $153 in Section 230, Row 6 to $337 in Section 228, Row 1. All available 200-Level seats are on the corners. There is also availability in five 100-Level sections on the corners, starting at $209 in Section 111 and one sideline section, Section 103, Row 5 at the 10-yard line for $566. Below is a screenshot of secondary market inventory on TicketIQ including get-in price by zone. 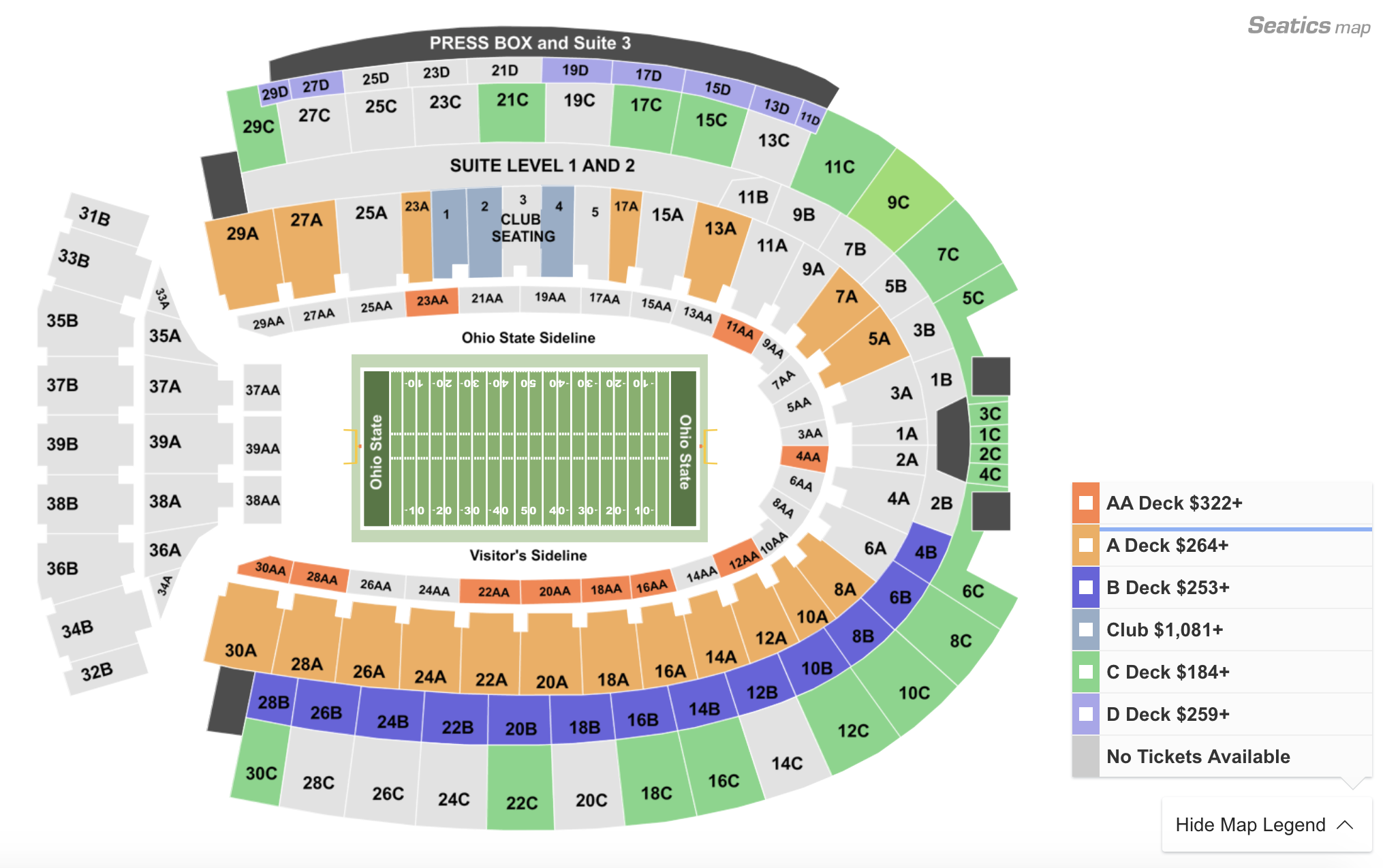 There is a wide selection of seats available, and fans can get in for less on the secondary market than the primary market. Tickets in the upper deck in the end zone start at $158 in Section 6C. There are also a limited number of Club Seats still available in Club Sections 1, 2 and 4 on the Ohio State side. These seats range in price from $1,143 in Club 4, Row 25 to $1,782 in Club 1, Row 22. All three sections are between the 30-yard lines and include cushier seats, upscale food-and-beverage options and club access. Elsewhere around the stadium, seats in the AA Sections, which are at field level and closest to the action, are still available, including seats in Row 1, Deck 23AA on the Ohio State side at the 30-yard line for $954.

How To Find The Cheapest Penn State vs Indiana Football Tickets 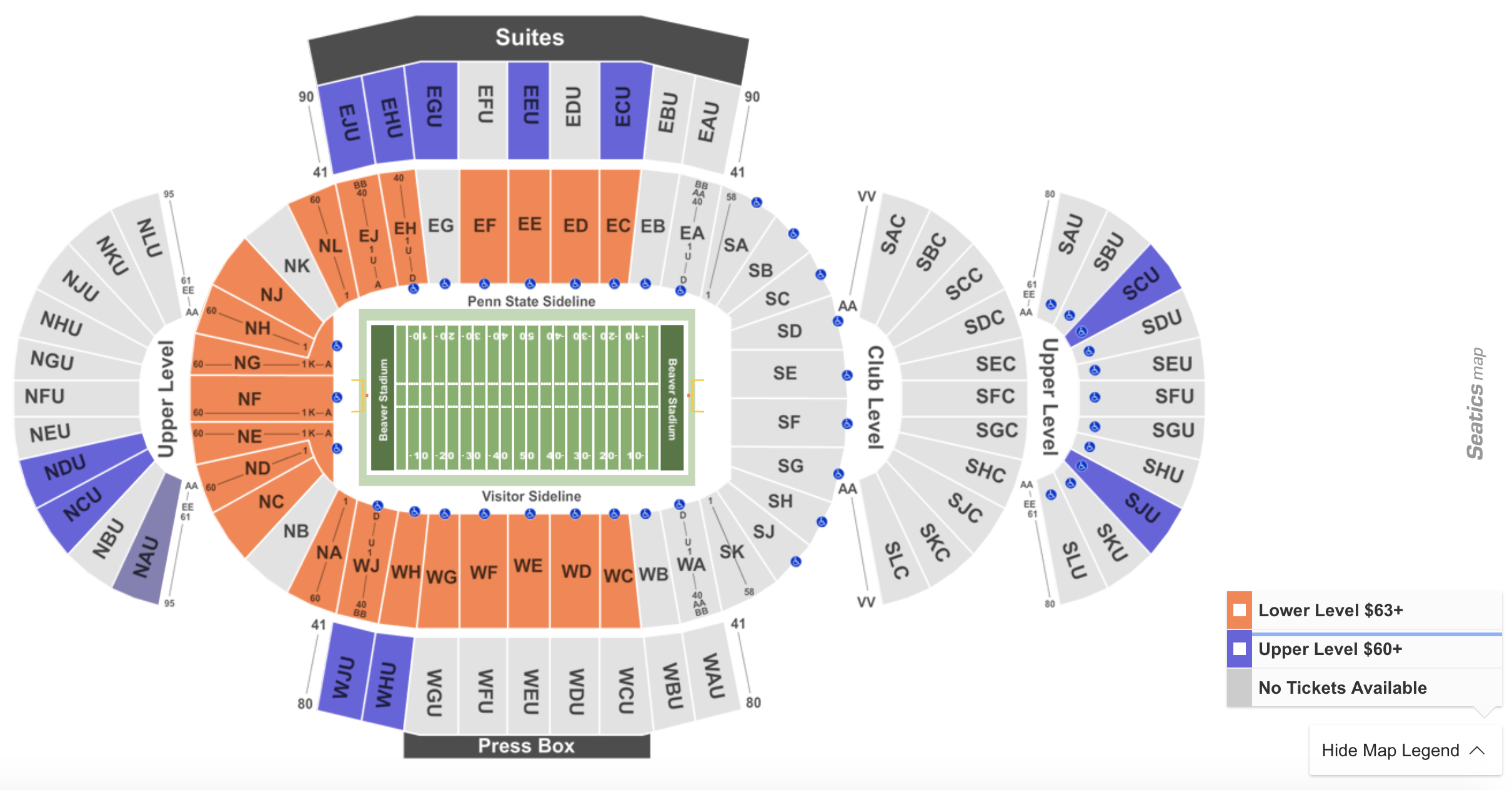 A limited quantity of primary market tickets remain for Saturday’s Indiana at Penn State Big 10 football game at Beaver Stadium. Seats are available in four lower-level sections on the Penn State side via Ticketmaster starting at $75. The priciest seats are $90 for single seats in Section EE, Row U at the 50-yard line, and Section EF Row 18 or Row 35 at about the 35-yard line.

Fans will find a bigger selection on the secondary market, and the cheapest seat is $71 in Lower Level NB, Row 57 on the corner. Seats in Sections EE and EF start at $143 in Section EF, Row 40. Upper level seats start at $72 in Section WHU high above the Indiana bench.

Club Seats are sold out on both the primary and secondary markets.

Below is a screenshot of secondary market availability on TicketIQ and get-in price by zone.

On the secondary market TicketIQ will offer fans a Low Price Guarantee on all  sold out Penn State football tickets in addition to Low Price Guarantees on all college football tickets. That means that if you find a secondary market ticket for less on a site like StubHub or Vivid, we’ll give you 200% of the difference in ticket credit. TicketIQ customers save up to 25%.

Where To Find The Cheapest Iowa Vs. Penn State Football Tickets At Kinnick Stadium On 10/12/19 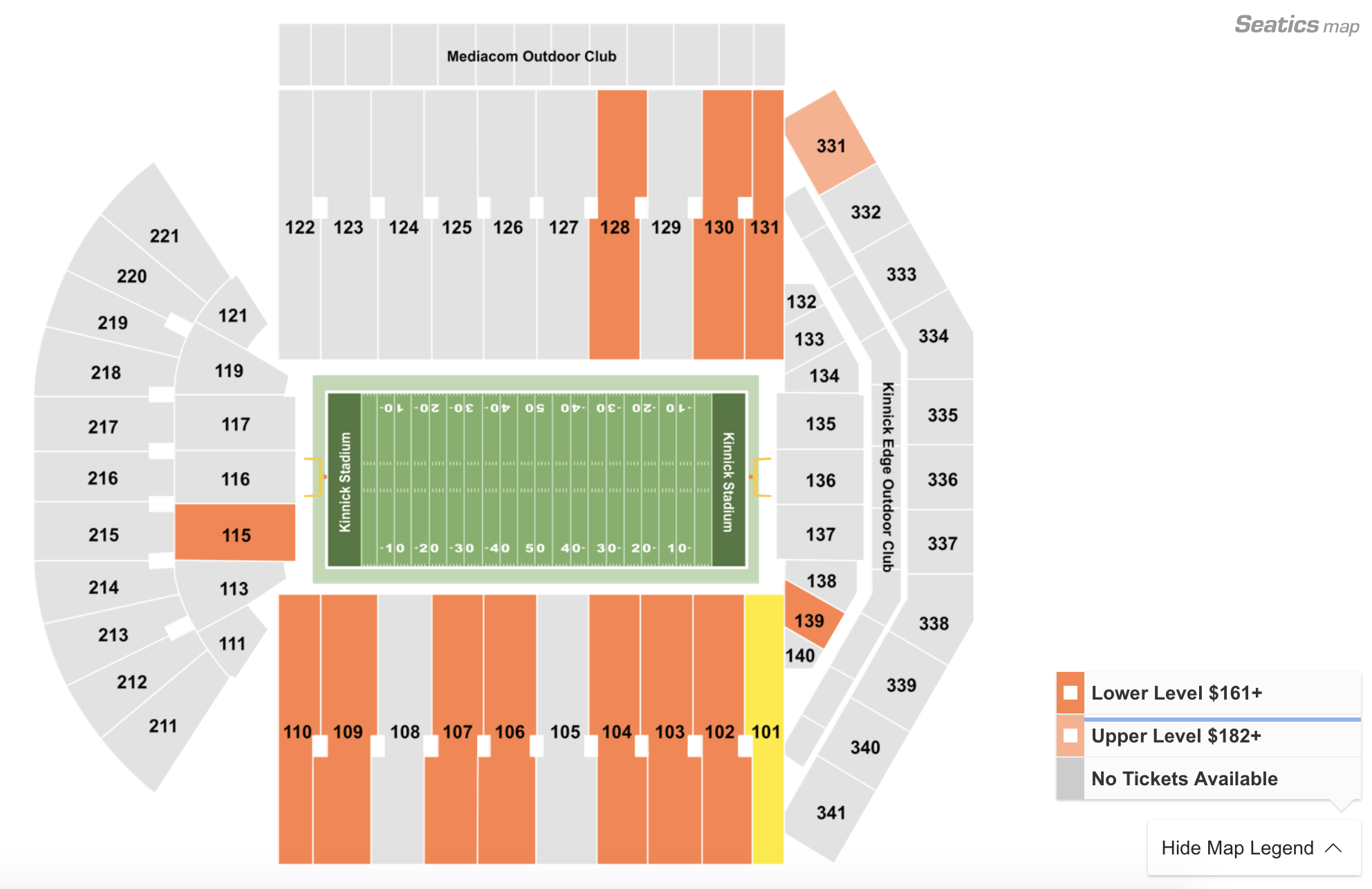 Primary market tickets to Saturday's Penn State at Iowa college football game are sold out on, so fans wanting to be in Kinnick Stadium for all the action will need to shop on the secondary market. According to TicketIQ.com, the cheapest seats still available start at $161 in Lower Level 101 on the sideline at the end zone. TicketIQ shows seats available in 11 100-Level sections along the sidelines, two 100-Level sections in the end zone, and one 300-Level end zone section. End zone seats start at $182 in Section 115, or $203 in Section 331. The priciest seats have an asking price of $436 for Row 1 in Section 107 at the 30-yard line. There does not appear to be any club seating remaining for this game. 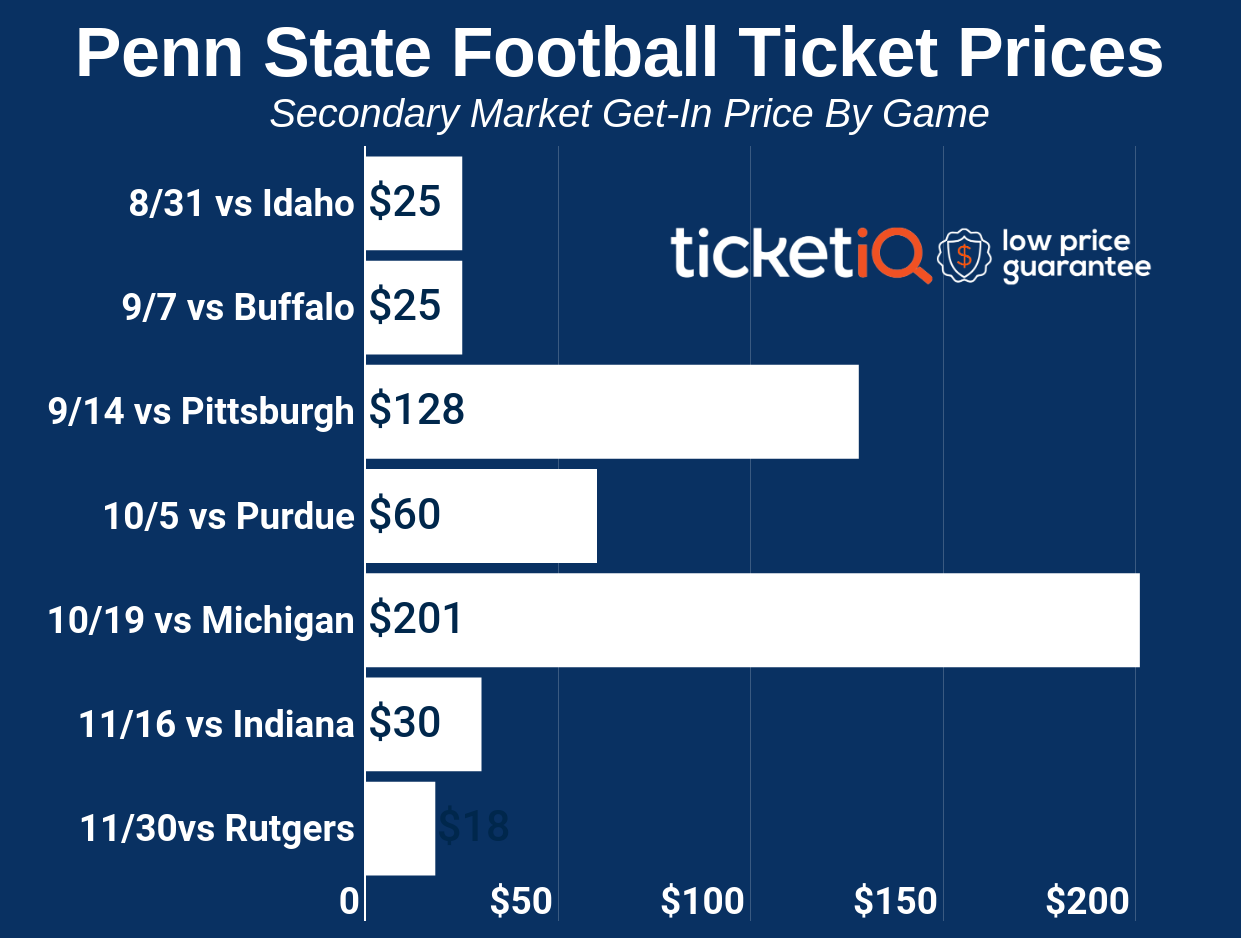 It’s been 14 years since Penn State had a losing football season, but fans are clearly missing the dominant 1980s, when the Nittany Lions won two national championships.

The average asking price for Penn State football tickets fell from $190 last year to $157 for the 2019 season. While there are secondary market tickets currently available, single game tickets went onsale July 2nd to the general public, via Ticketmaster. Nittany Lion Club members have been able to to buy single-game ticket tickets since June 18th, and membership is available for as low as $100. Upper-level tickets are available for some of the lower-demand games, like Buffalo and the opening game against Idaho. Face price tickets for those games start at $40. Face price tickets for the Purdue game start at $80 with tickets available for Rutgers starting at $55. Tickets for the Pitt and Michigan games are completely sold out.

TicketIQ also has a  Low Price Guarantees on sold out Penn State Football Tickets  for every home and road game on the 2019 schedule. TicketIQ also has Low Price Guarantees on all college football tickets , which means that if you find a secondary market ticket for less on a site like Stubhub or Vivid, we’ll give you 200% of the difference in ticket credit. TicketIQ customers save up to 25% compared to other secondary marketplaces like Stubhub.

On the secondary ticket market, of their seven home games, only three will cost fans $150 or more, including the biggest game of the season, the October 19 matchup with Big 10 rival Michigan, which is averaging $363 on the secondary market and with the cheapest ticket at $201.

Below is a look at the cheapest tickets for all of Penn State’s 2019 home games at Beaver Stadium.

Tied with the September 7 game against Buffalo as the cheapest in terms of average asking price, these teams have never played before. Five months before the game, Idaho starts at an even bigger disadvantage — two players, including defender Christian Elliss, won’t be playing after getting suspended following an arrest for theft. The game marks the third consecutive season that Penn State will open against a Sun Belt team.

One of the two cheapest games of the season, there is little history between Penn State and Buffalo — the teams have played three times, and Penn State has won the last two, including a 27-14 defeat of Buffalo on September 12, 2015. The teams first played on November 29, 1900, and Buffalo won that game, 10-0. It was then 107 years before they played again.

This in-state rivalry is the second priciest game of the season at State College, and this year’s game marks the 100th meeting. Penn State has not played any other team as often as it has played Pitt, and holds a 52-43-4 all-time series advantage. Branded the “Keystone Classic” in 2016, Penn State has won the last two, including a 51-6 victory at Pitt on September 8, 2018.

The first Big Ten game of the season, Penn State and Purdue are familiar opponents since they began playing somewhat regularly in 1995. Following a two-game series in 1951-52, the teams took a 43-year hiatus before playing that 1995 meeting, which Penn State won. The Nittany Lions hold a commanding all-time series advantage, 14-3-1, and have won the last eight consecutive, including the last meeting on October 29, 2016.

The priciest game of the season by far, Penn State and Michigan have played 22 times, and Michigan has dominated the series of late, winning four of the last five, including last year’s meeting on November 3. In that game, the Wolverines won, 42-7, payback for the Nittany Lions’ 42-13 victory in 2017. The teams first met in 1993, when Penn State joined the Big Ten.

Despite playing 22 times since 1993 when Indiana joined the Big Ten, not much of a rivalry has developed between these teams. Penn State dominates the rivalry, and has won 21 times. Indiana’s only victory was on October 5, 2013, when it won, 44-24, at Bloomington.

The third cheapest game of the season, this game marks the final Big Ten home game of the season at State College. The teams have played 29 times, including a stretch of 14 years between 1982-95, during which Rutgers won only once. Since the Scarlett Knights joined the Big Ten in 2014, Penn State has won five consecutive games. The get-in price for this game is the cheapest of the season.

TicketIQ is committed to the cheapest tickets possible, and we make much less on sold out tickets compared to other major marketplaces like StubHub and Vivid. That means ticket buyers save from up to 25% on TicketIQ on sports, music and theater. We're able to do this because we also work with teams, venues, and other ticket owners, to help them sell tickets at face price, directly to consumers like you, through Ticketmaster and Paciolan. For an overview of the 2019 College Football Ticket Buying landscape, and details on the cheapest way to get sold out and face price tickets for every pre-season top 25 team, visit the TicketIQ Blog.