Where To Buy 2019 Oregon Football Tickets

Primary market tickets for Ducks home games are available through the Oregon website and through their primary partner Ticketmaster for all games at Autzen Stadium on the 2019 schedule. The school is offering a three-game flex pack that allows fans to choose any games on the 2019 schedule, in addition to a mobile season pass for $299, with tickets accessed through the Goducks gameday app at least four hours prior to kickoff. These tickets will not be allowable for transfer or resale. For single-game buyers, face value for Oregon football tickets range from $23 for the season-opener against Nevada all the way to $93 for the

On the secondary market TicketIQ has Low Price Guarantees on Oregon football tickets for all sold out games and sections on the 2019 schedule. TicketIQ also has Low Price Guarantees on all college football tickets, which means that if you find a secondary market ticket for less on a site like StubHub or SeatGeek, we’ll give you 200% of the difference in ticket credit. TicketIQ customers save an average of 5%-20% compared to StubHub and SeatGeek.

How Much Are 2019 Oregon Football Tickets

The Ducks began this season as the preseason No. 12 team, which equals their best rank from 2018. The last time Oregon’s preseason rank was this high was 2015 when the squad finished with a 9-4 record. The cheapest face value tickets are $48 for Cal, $43 for Colorado, $53 for Washington State, $48 for Arizona, and $93 for Oregon State.

Tickets for Ducks home games on the secondary market are averaging $89 at Autzen Stadium, which is the lowest price of the decade for Oregon. The price has decreased each of the last two seasons. 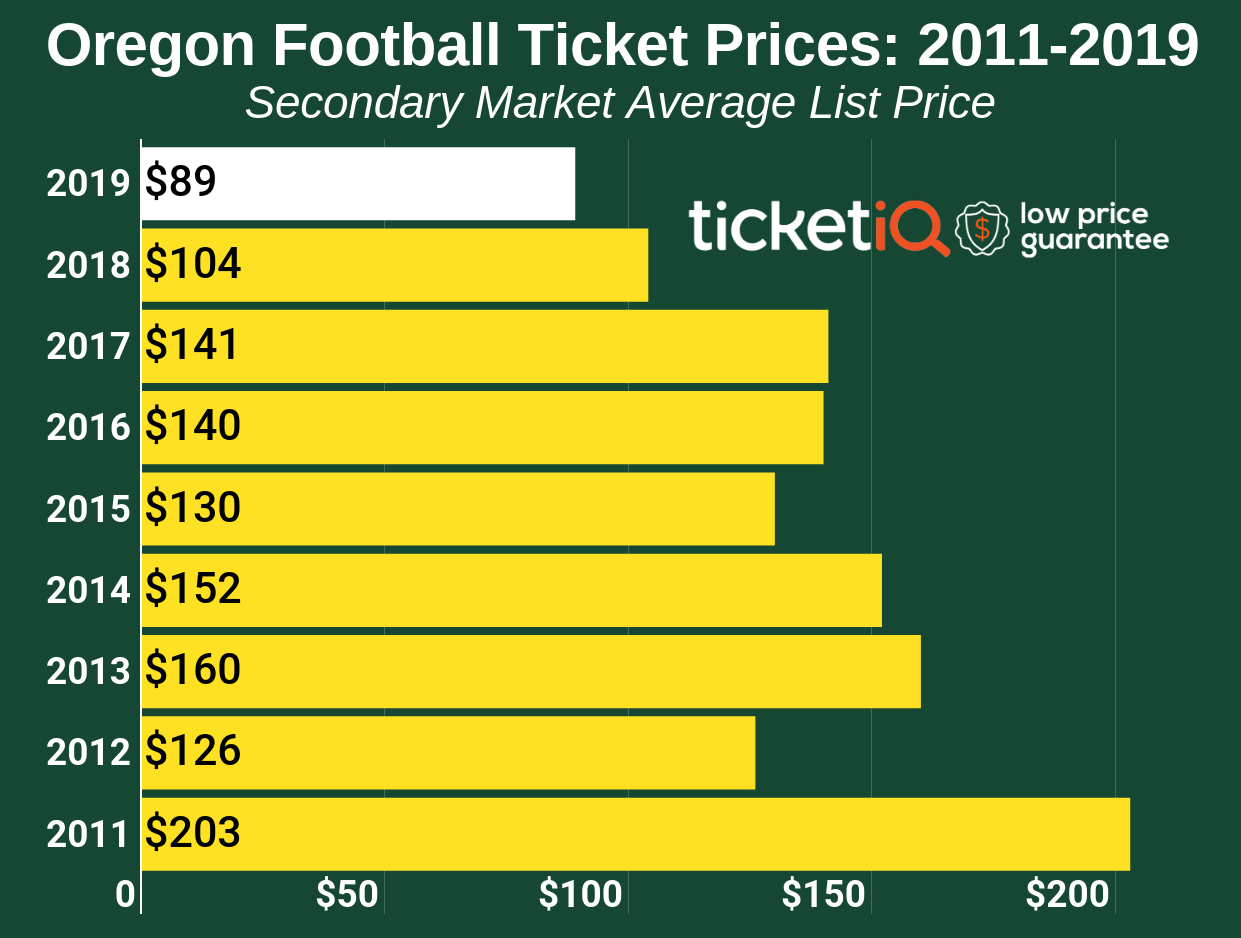 Ticket Prices For All Oregon Home Games On The 2019 Schedule

Oregon has not faced Nevada since 2011, but has had a lot of success against the Wolfpack. In the last meeting, Oregon won, 69-20. The 2019 meeting is the lowest priced game at Autzen Stadium this season.

The Ducks’ relatively easy early schedule continues against a Montana team that Oregon last faced in 2005. The Ducks have never lost to the Grizzlies in their history.

Heading into 2016, Oregon had won six consecutive contests against Colorado. However, the Buffaloes snuck by the Ducks, 41-38, in September 2016, which was the last meeting between the two schools.

The contest against the Cougars has the second-most expensive ticket of the season in Eugene, as fans are hoping to see Oregon stop its four-game losing streak to Washington State. Last year, No. 25 Washington State defeated No. 12 Oregon, 34-20.

Oregon and Arizona have faced each other the last two seasons, and each team has emerged victorious on their homefield. Oregon hosts Arizona late in the season, hoping to keep the homefield streak going.

The most expensive contest of the season at Autzen Stadium is against the rival Beavers. Oregon looks to win its third consecutive game against Oregon State in its season finale.