Where to Buy Oklahoma Football Tickets

Despite the Sooners’ strong campaign last year, some season tickets are still available via Paciolan. Public lower level and public upper level seats both cost $455, so your selection will be guided by your preferred view rather than pricing. Your actual seat, however, will be assigned based on priority points meaning that, as a new season ticket holder, you’ll likely end up with some of the worse seats in your respective level. Beyond the base cost, tickets also require per-seat donation to renew for each successive season. All season tickets also come with a print-at-home option for your convenience.

Those looking to splurge also have three different premium seating sections to choose from: the new South Club, which includes the only cushioned seat backs in the stadium, the MidFirst Bank Stadium Club, offering elevated sideline views, and the Santee Lounge, which has field level sideline views. All three areas include air conditioning, inclusive food, and non-alcoholic drinks.

Single game tickets will be released in August pending availability; if you want to get seats at a specific game, the only way to guarantee that you can get a primary market seat is with a season ticket. Mini plans were also offered in past seasons, but the school isn’t offering any at the moment.

On the secondary market TicketIQ has Low Price Guarantees on Oklahoma football tickets for all sold out games on the 2019 schedule, in addition to Low Price Guarantees on all college football tickets, which means that if you find a secondary market ticket for less on a site like Stubhub or Seatgeek, we’ll give you 200% of the difference in ticket credit. TicketIQ customers save an average of 5%-20% compared to Stubhub and Seatgeek.

How Much Are Oklahoma Sooners Football Tickets

Sooners tickets currently sit in two price ranges on the secondary market. The games against South Dakota and Iowa State are cheaper options while the other four games sit together in a higher tier. There isn’t much variance in the prices, though, with only $48 separating the cheapest get-in price ($44 against South Dakota) and the most expensive ($92 against Texas Tech).

Overall, Oklahoma tickets on the secondary market for games at Gaylord Family Memorial Stadium are averaging $173 for the 2019 season. That price is the 14th highest in the nation. 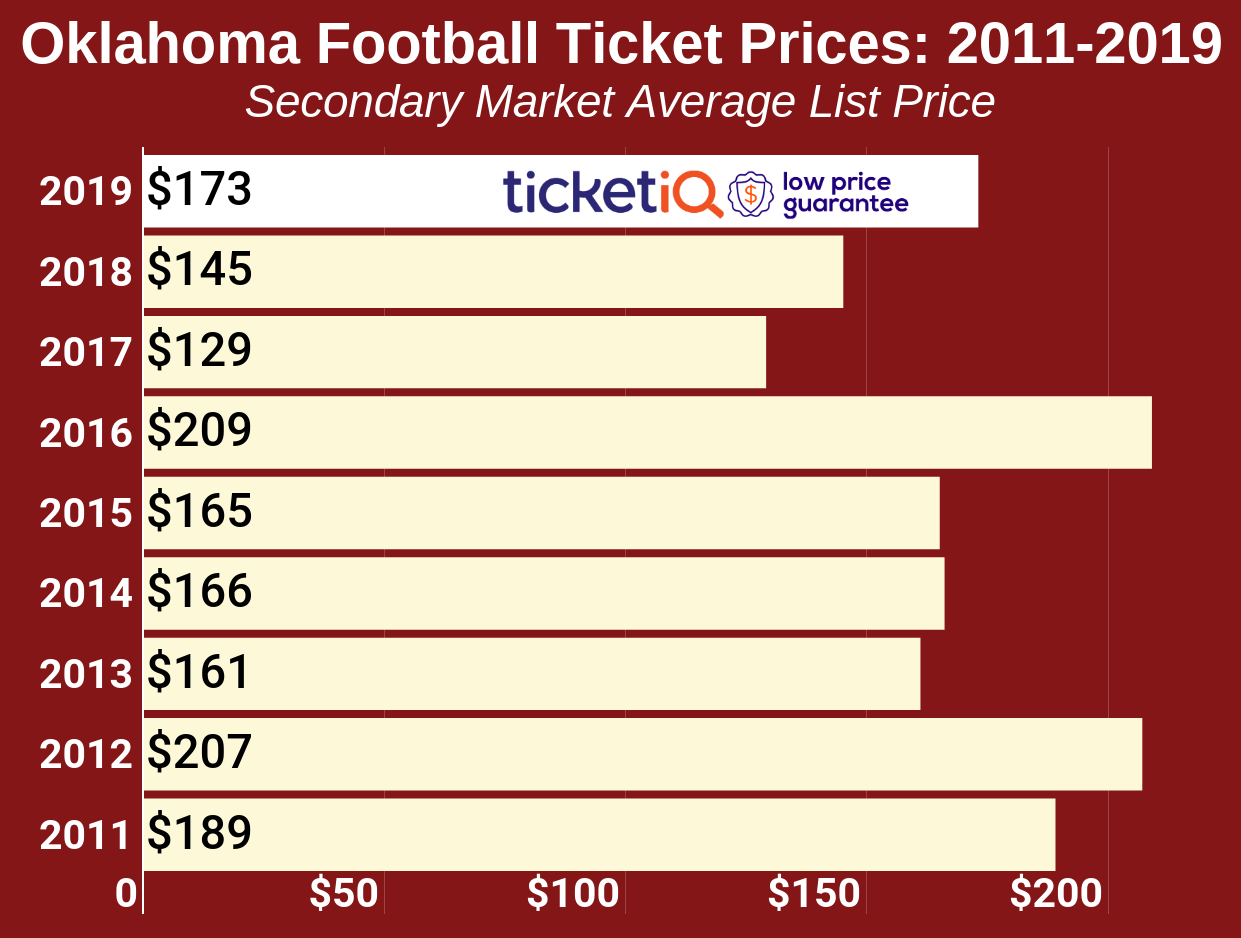 Prices for All Sooners Home Games on the Schedule

Houston ended last season by giving up 70 points to Army in the Armed Forces Bowl. If that’s what the Black Knights could do, the Sooners should have no trouble hanging a big number on their defense in the home opener.

The Coyotes struggled in the Missouri Valley Football Conference, last year finishing with a 3-5 record (4-7 overall). Even without Kyler Murray, Marquise Brown, and the rest of their departures, Oklahoma should be able to handle them without too much of an issue.

Texas Tech is coming into this game with a new head coach, offensive coordinator, and defensive coordinator. They’ll be looking to boost the Red Raiders’ fortunes, but Oklahoma is still the favorite in both the division and this game.

You might not think of West Virginia as a college football power, but they’ve been putting together some solid seasons in Morgantown. Last year’s meeting between these two teams was a shootout, with Oklahoma edging out the Mountaineers 59-56. Look for this game to be another good one.

Iowa State finished in third place in the Big 12 last year, coming in behind Oklahoma and Texas. They should finish roughly in that same position this year; they’ll probably give the Sooners a stiff test for at least half of this game, but won’t have enough in the tank to pull off an upset.

TCU are a middle of the road Big 12 team, so they’re not going to blow anyone away. That definitely includes a team as explosive as Oklahoma; expect the Sooners to end the home schedule in style with a comfortable win.