No matter where you sit, an Ohio State football season ticket costs $780, plus a $1500 Buckeye Club membership per each pair of seats. Those looking for smaller commitments can also select Rush or Blitz three-game plans; the former costs $327 and includes games against Miami (Ohio), Maryland, and Wisconsin while the latter costs $297 and features games against Florida Atlantic, Cincinnati, and Michigan State. There’s also a four game flex pass, which assigns you a different seat via a digital ticket for games against Florida Atlantic, Miami (Ohio), Michigan State, and Maryland for $249.

A limited amount of single game tickets will also go on sale Friday, July 19 via Ticketmaster. Seats will theoretically be available for all seven home games in three different pricing tiers: reserved, B-Deck top four rows, and box/club. Prices obviously increase with both seating level and the quality of the opponent.

On the secondary market TicketIQ has Low Price Guarantees on Ohio State football tickets for all games on the 2019 schedule, in addition to Low Price Guarantees on all college football tickets, which means that if you find a secondary market ticket for less on a site like Stubhub or Seatgeek, we’ll give you 200% of the difference in ticket credit. TicketIQ customers save an average of 5%-20% compared to Stubhub and Seatgeek.

How Much Are Ohio State Football Tickets

As you would assume given the status of the program, Ohio State’s tickets are on the more expensive side. Even games against smaller non-conference opponents have average resale prices of over $160. Shopping smart, now more than ever, is essential. Keeping an eye on deals, in addition to targeting mid-level games like visits from Cincinnati or Maryland, will likely help you get the best deal with the least stress.

Overall on secondary market, the average Ohio State ticket for the 2019 season is $352, making them the second most expensive team in the nation, behind only Georgia. They're also the second highest of the decade for the Buckeyes. 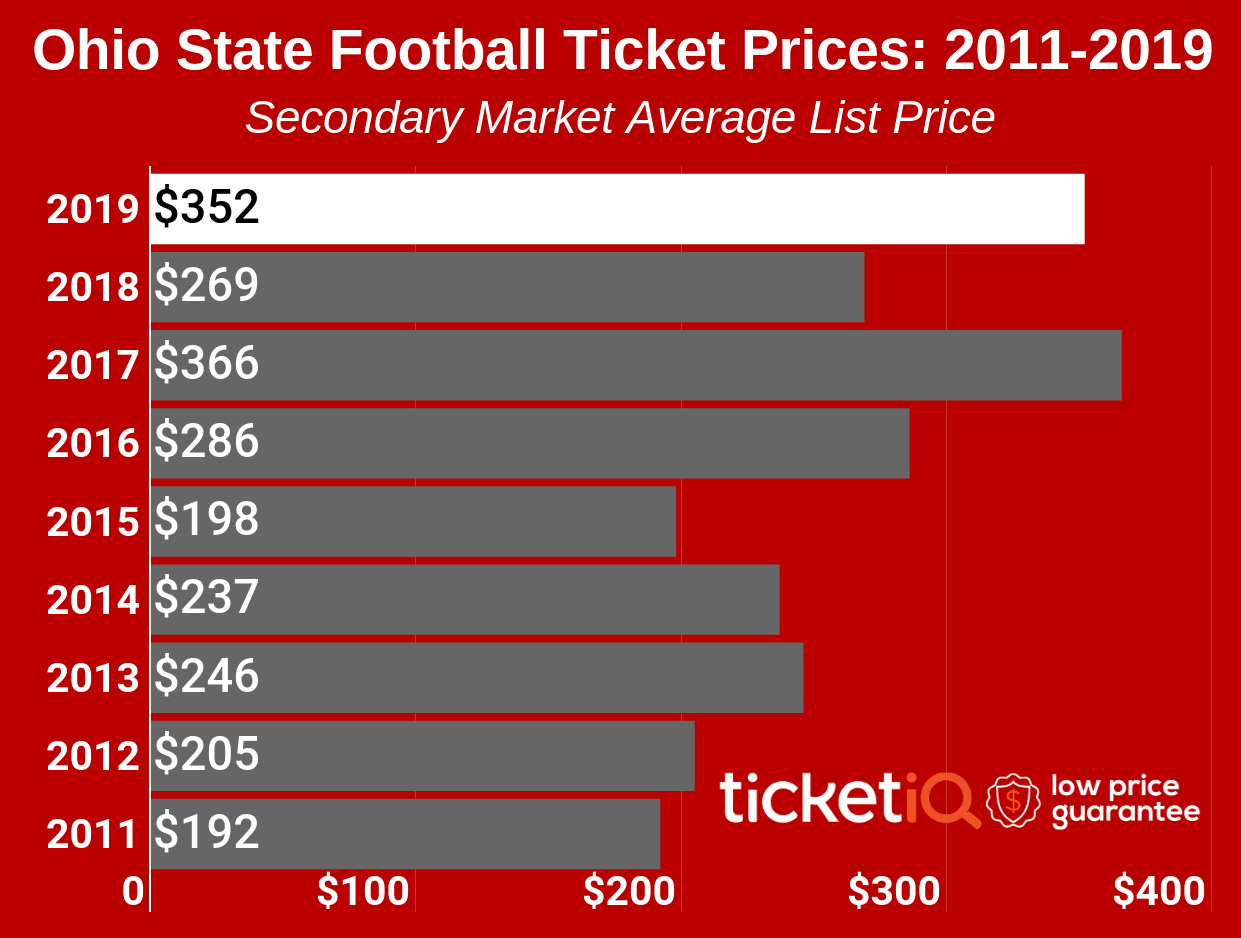 The Owl’s biggest name is actually on the sidelines rather than the field: head coach Lane Kiffin. But, regardless of who’s on the staff, Ohio State shouldn’t have any problems kicking off the season on a positive note.

While you might not think of the Bearcats as a college football power, things are trending in the right direction in Cincinnati. Coming off an 11-2 record last season, they’ll ensure Ohio State are on their toes early in the season.

After a visit to Indiana, Ohio State returns home for a date with the Miami RedHawks. This is the Buckeyes’ second cheapest home game of the season so, if you want to see them before prices soar, this is a date to target.

This one’s a prime-time, nationally broadcast game for a reason. The Michigan State program might not have much offensive firepower at the moment, but their defense will ensure the Buckeyes have to work hard for every yard. Remember this date.

After struggling last season, when they were expected to make a run at the Big 10 title, Wisconsin will be looking to make a statement this year. Coming into Columbus will give them a chance to do just that, but Ohio State will likely have too much quality at the end of the day.

Maryland’s new head coach Mike Locksley has a strong pedigree, but turning around a Maryland football program with now-infamous culture issues is a major task. Ohio State will be a favorite in this one and should take care of business comfortably.

With last year’s meeting between these teams being decided by a single point, you know these two teams are evenly matched. It might be tempting for the Buckeyes to focus on their final game against Michigan but, if their collective minds wander, Penn State is good enough to make them pay.

For sold out seats and events, TicketIQ has Low Price Guarantees on all events at Ohio Stadium for Ohio State Buckeyes football as well as Concerts. That means that if you find a secondary market ticket for less on a site like StubHub or Vivid Seats, we’ll give you 200% of the difference in ticket credit. TicketIQ customers save up to 25% compared to other secondary sites. TicketIQ also provides access to unsold face-value tickets for all events at Ohio Stadium via Ticketmaster.

The floor courtside section of Ohio Stadium is divided into 5 different sections, ranging from AA to A,B,C and D. Eventually, the AA sections are made closest to mid-field. The west side of the stadium uses odd numbers (sections 1-39), while the east side uses even numbers (sections 2-38). The vast majority of seats at the stadium are bleacher seating, meaning no chair backs. Block O South is located in section 39A and Block O North is located in section 1A and 2A of Ohio Stadium.

Club Seating at Ohio Stadium is found in sections C1-C5, and these five sections are split between ‘Platinum’ C2-C4  and ‘Gold’ C1 and C5. These club seats are extra wide and have chair backs, and provided access to club lounges and upscale food and beverage.The Student Sections at Ohio Stadium are located in south end zone sections 31-39 and in sections 1-7 in levels A and C.

Floor seating at Ohio Stadium consists of as many as 12 sections, numbered A through M, with sections A-G closest to the stage and H,J,K,L,M farther from the stage. Behind the stage, sections include 33A-39A and 31B-39B.

WHERE CAN I FIND CHEAPEST TICKETS FOR OHIO STADIUM

The Capitals and Wizards have unsold face-value tickets available for most games, which can be purchased directly through Ticketmaster. Prices may be above or below prices on the secondary ticket market. Many Concerts also have unsold tickets. For Sold Out Seats and Events, TicketIQ has Low Price Guarantees on all events at Barclays Center. That means that if you find a secondary market ticket for less on a site like StubHub or Vivid Seats, we’ll give you 200% of the difference in ticket credit. TicketIQ customers save up to 25%.

Ohio Stadium does not support Print at Home style tickets and thus, a buyer has to install official Ohio State Buckeyes app to manage their tickets. You can either buy tickets from the official mobile app or Ticketmaster.com.

The guests will have to scan the QR code at entrance to fetch an entry into Ohio Stadium.

Ohio Stadium offers other convenient services including wheelchair assistance, accommodations for those with disabilities, including elevators, accessible seating, and accessible restrooms, lost and found and wheelchair check in. For guests who wish to transfer to a seat from their wheelchair, Ohio Stadium  will store the wheelchair at Guest Services on the A and AA levels mainly.