Sorry! There are currently no tickets available for Notre Dame Fighting Irish Football.

Notre Dame football fans will have a unique opportunity this season – more cheap seats. According to OneFootDown, the Fighting Irish will increase the number of seats available for economy pricing  –  between $45-$95, depending on the opponent. The site has a grid with primary market prices, though single-game tickets don’t yet appear available through the Notre Dame website. On the secondary market, at $276 Notre Dame ranks 5th in the nation in terms of average list price for Tickets at Notre Dame Stadium. That is up 11% from last season. 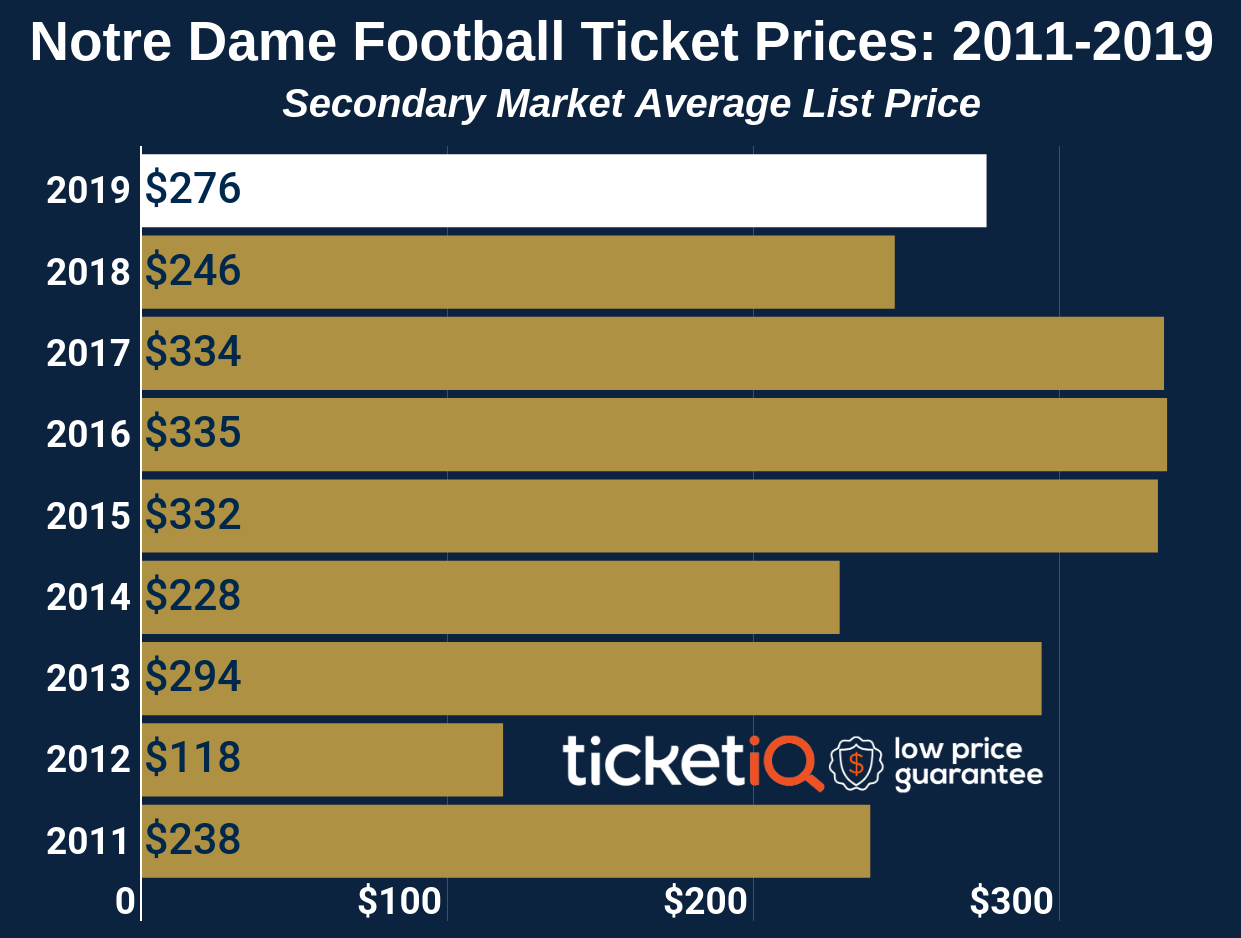 TicketIQ has Low Price Guarantees on Notre Dame football tickets for all games on the 2019 schedule, in addition to Low Price Guarantees on all college football tickets, which means that if you find a secondary market ticket for less on a site like Stubhub or Seatgeek, we’ll give you 200% of the difference in ticket credit. TicketIQ customers save an average of 5%-20% compared to Stubhub and Seatgeek. 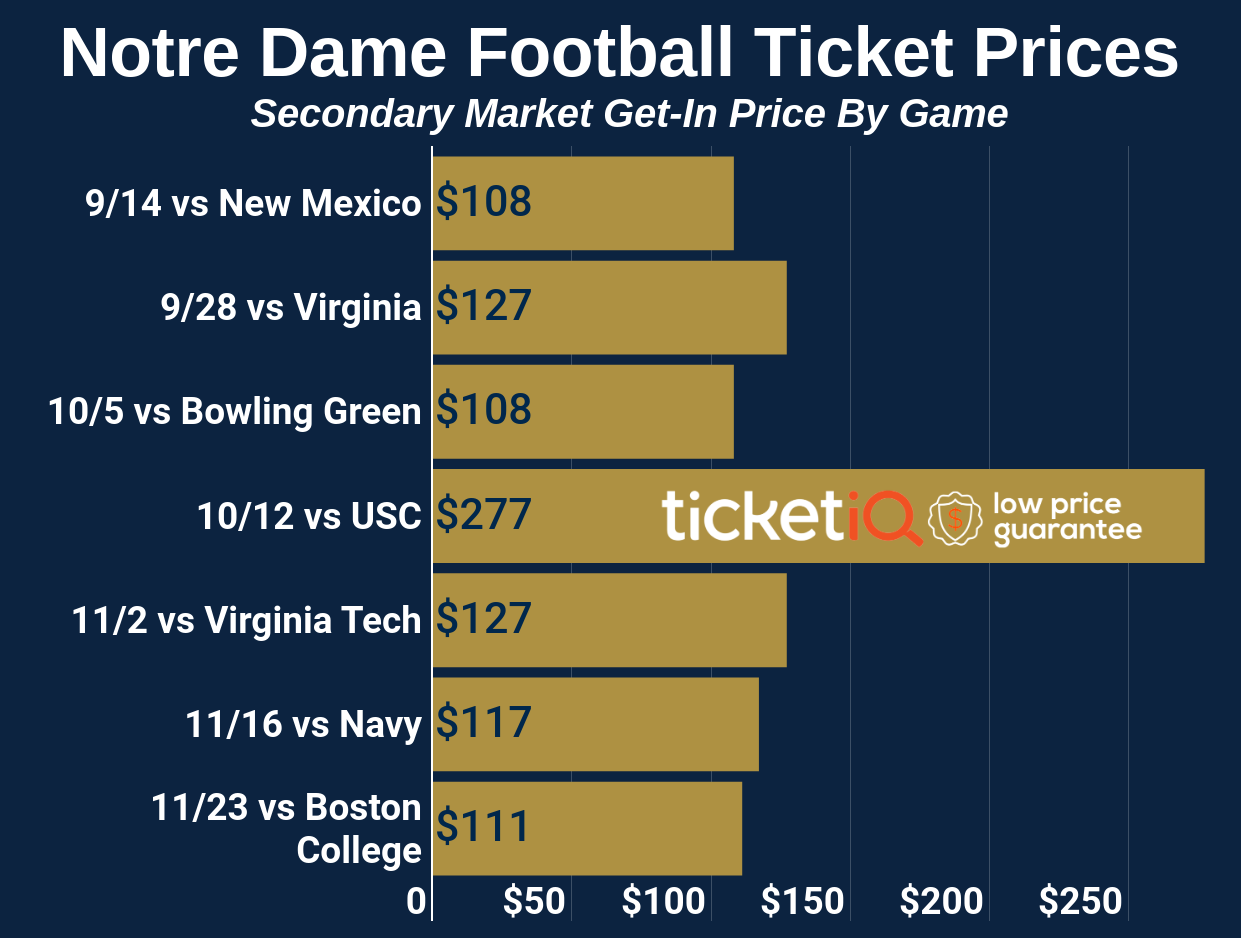 The Fighting Irish remain the most well-known Independent in college football. This year, their biggest home game in terms of interest and secondary ticket market average asking price will be against USC. Notre Dame is currently ranked No. 11 in USA Today’s preseason poll, but none of their seven home opponents are in the Top 25.

Other than the expanded cheap seats, primary market pricing remains the same as last season. In addition to regular seats, there are club seats available directly from the school in the Seven on 9 Club section. According to the UND.com, these seats "provide a premium hospitality experience on a game-by-game basis and includes exclusive access to amenities and services for the patrons within. Located on the ninth floor of Corbett Family Hall, this club space allows its 130 guests the opportunity to socialize throughout the game and enjoy an climate-controlled seat with a great view of the field and campus."

For fans looking to get in on the cheap, the four corners on the upper level are the best value at Notre Dame stadium, and here’s a little insider information from OneFootDown: “sections 101-104 & sections 134-136 are great deals with the jumbotron right across the stadium on the south side.”

How Much Are Notre Dame Football Tickets

This game is a great value and is currently the third cheapest Notre Dame home game on the secondary market. New Mexico and Notre Dame have never played, though Lobos head coach Bob Davie is pretty familiar around South Bend – he was the head coach from 1997-2001, and took Notre Dame to its first BCS bowl, the Fiesta Bowl in 2001.

This is the second priciest of Notre Dame’s home games, though it still pales in comparison to the $475 that the USC game is trending at. Notre Dame and Virginia have played only twice, but this will be the Cavaliers first visit to South Bend. The Fighting Irish beat Virginia at East Rutherford, New Jersey in 1989 and against at Charlottesville in 2015.

A great value and opportunity for fans to get inside Notre Dame Stadium, this is the cheapest game of the season. Bowling Green and Notre Dame have never played, and the game will be just Notre Dame’s fifth against a Mid-American Conference team, according to Bowling Green’s website.

These teams have played 90 times and since 1952, the winner has taken home the jeweled shillelagh. The priciest game at Notre Dame Stadium this season, the Fighting Irish will be looking for a third consecutive victory. Notre Dame holds a 46-36-5 all-time series advantage (three games were vacated by Notre Dame).

The third priciest game of the season, Notre Dame and Virginia Tech have played only twice, and each team has won once. The Hokies won at South Bend in 2016 and the Fighting Irish returned the favor in 2018, winning 45-23 at Blacksburg.

Considered the longest intersectional rivalry in history, these teams have met 92 times dating to 1927. Not surprisingly, Notre Dame holds a commanding 76-13-1 all-time series advantage, and have won the last two. Notre Dame had two vacate two victories, in 2012 and 2013, but including those, have won seven of the last eight. This game has the fourth highest average asking price of the season. Prior to Navy’s 2007 victory, Notre Dame won 43 consecutive.

Often called the “Holy War” because both schools are Catholic, Boston College and Notre Dame are the last two Catholic schools left playing in the FBS. Despite the history, the game the second cheapest of the season at Notre Dame Stadium, so it's a good value for fans. The rivalry dates to 1975 and Notre Dame has an all-time series advantage of 14-9, not including the 2012 game it won, but had to vacate.

For Sold Out Seats and Events, TicketIQ has Low Price Guarantees on all events at Notre Dame Stadium for the Notre Dame Fighting Irish as well as Concerts. That means that if you find a secondary market ticket for less on a site like StubHub or Vivid Seats, we’ll give you 200% of the difference in ticket credit. TicketIQ customers save up to 25% compared to other secondary sites. TicketIQ also provides access to unsold face-value tickets for all events at Notre Dame Stadium via Ticketmaster.

Tailgating is allowed in stadium parking, but charcoal grills are prohibited. Entrances at Notre Dame Stadium include Gates A to E and the North Tunnel. Notre Dame Stadium is know for its view of "Touchdown Jesus" a large mural entitled "The Word of Life" located in one of the end zones.

Loge Seating is available in the stadium’s semi-private seating areas in Duncan Student Center and Corbett Family Hall. It consists of chairs with casters and counter-style tables. Field Level Seats offer views from the North end zone of the stadium. Chairback seating can be found in the preferred seating areas (Rows A-J) of sections 8-12 and 26-30. The student sections at Notre Dame Stadium are located in section 28-36.

WHERE CAN I FIND CHEAPEST TICKETS FOR NOTRE DAME STADIUM

The Notre Dame Fighting Irish football have unsold face-value tickets available for most games, which can be purchased directly through Ticketmaster. Prices may be above or below prices on the secondary ticket market. Many Concerts also have unsold tickets. For Sold Out Seats and Events, TicketIQ has Low Price Guarantees on all events at Notre Dame Stadium. That means that if you find a secondary market ticket for less on a site like StubHub or Vivid Seats, we’ll give you 200% of the difference in ticket credit. TicketIQ customers save up to 25%.

WHAT IS MOBILE TICKET POLICY AT NOTRE DAME STADIUM

All guests, regardless of age, require a ticket for home football games for comfort, safety, and security reasons. Notre Dame Stadium does NOT permit passes out of the stadium for re-entry to the stadium. You can purchase tickets either from Ticketmaster outlets or Notre Dame App Manager.

Notre Dame Stadium offers other convenient services including wheelchair assistance, lost and found and wheelchair check in. For guests who wish to transfer to a seat from their wheelchair, Notre Dame Stadium will store the wheelchair at Guest Services on the 10 and 100 level. Reserved seating areas for patrons utilizing a wheelchair or scooter or for those with mobility limitations are located throughout the stadium. Seating is available to patrons and one companion.