Where To Buy 2019 Minnesota Football Tickets

Primary market tickets for Minnesota home football games are available through the GopherSports website via primary market partner Paciolan, and there are multiple choices available. Season-ticket packages, which start at $249, and Mini Plans are currently available. Single-game tickets, which will start at $20, will go on presale August 5 and public onsale begins August 12.

On the secondary market TicketIQ has Low Price Guarantees on Minnesota football tickets> for all games on the 2019 schedule, in addition to Low Price Guarantees on all college football tickets. That means that if you find a secondary market ticket for less on a site like Stubhub or Seatgeek, we’ll give you 200% of the difference in ticket credit. TicketIQ customers save an average of 5%-20% compared to Stubhub and Seatgeek.

How Much Are 2019 Minnesota Football Tickets

With P.J. Fleck entering his third season and following a 7-6 campaign capped by a 34-10 bowl win, expectations are high. Demand has pushed the average asking price of a 2019 ticket to a Minnesota home game up to $123 from $77 in 2018. That price is the fourth highest since 2011. The most expensive season was 2017 when fans paid an average of $127 on the secondary market a year after the Golden Gophers went 9-4 and won the Holiday Bowl.

The priciest game this season is currently trending at $134 for the October 12 matchup against Nebraska. Three of this season’s six home games have average asking prices of $119 or more. 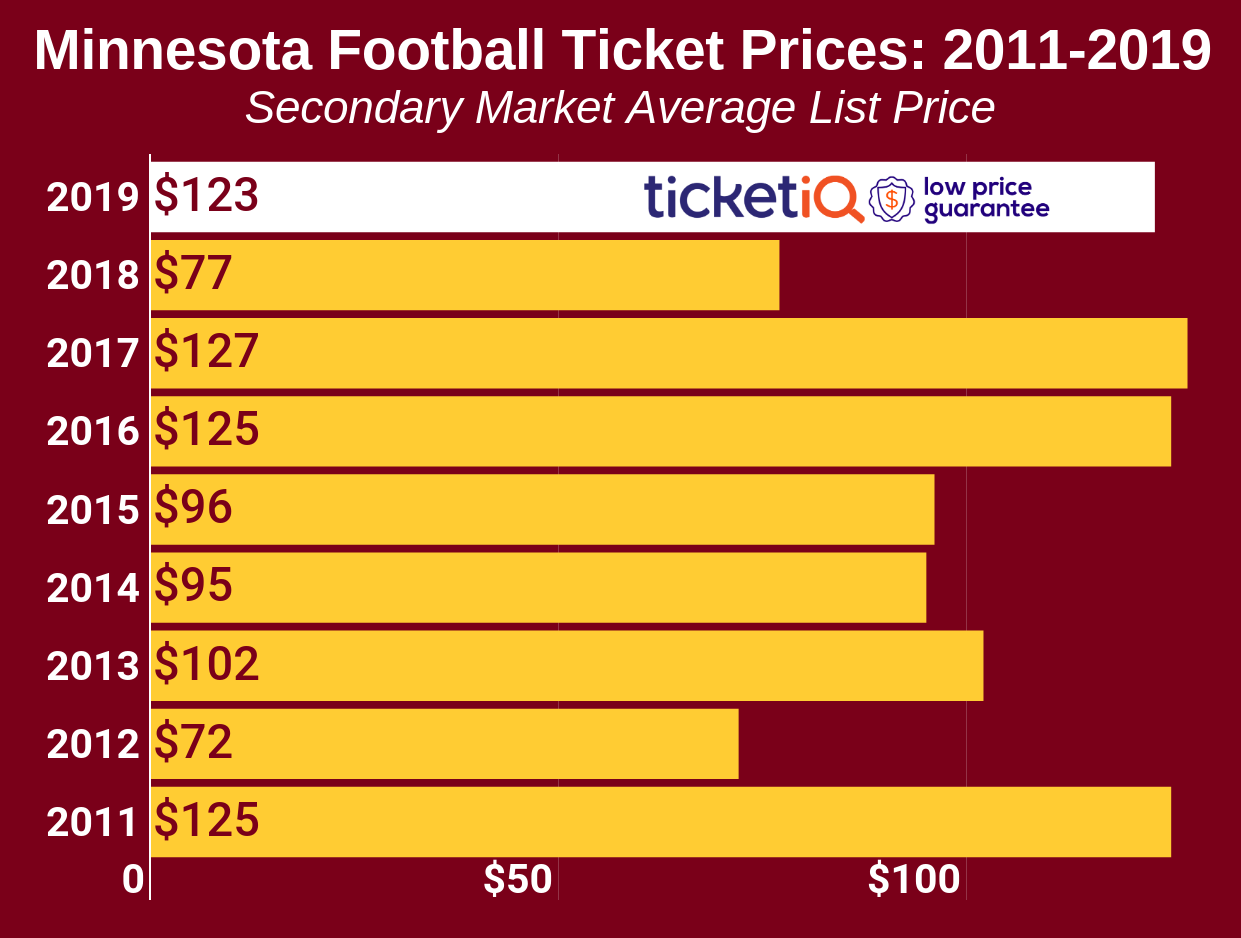 Ticket Prices for All Minnesota Home Games On The 2019 Schedule

The second cheapest game on the secondary market, these teams have met only one other time since South Dakota State moved to Division I. Minnesota beat the Jackrabbits, 16-13, in 2009. This game is the season opener for Minnesota and one of only two home non-conference game of the season.

This is the cheapest game on the secondary market, and the teams have never played. The game is one of two home non-conference matchups this season.

The Big Ten home opener, this game extends a rivalry that dates to 1898. The teams have played consecutively since 2007, and Minnesota has won seven of the the last 11 meetings and holds a 38-30 all-time series advantage. Illinois snapped a three-game Minnesota win streak with a 55-31 victory last season.

It’s no surprise this storied rivalry is the priciest home game on the secondary market. Since Nebraska joined the Big Ten in 2011, the teams have played annually, and in 2014 began playing for the “$5 Bits of Broken Chair” trophy. During the Big Ten era, Nebraska has won five of eight games, and holds a 35-25-2 all-time series advantage.

The third Big Ten home game of the season, this game is also the cheapest of the conference games. Maryland and Minnesota have a limited history — they’ve played only three times since Maryland joined the Big Ten and four times overall. Minnesota has won three of those games.

This game is the third priciest on the secondary market and has a unique beginning — Minnesota was Penn State’s first Big Ten opponent after the Nittany Lions joined the conference in 1993. Since then, the teams have played for the Governor’s Victory Bell, and Penn State holds a 9-5 all-time series advantage.

The most-played rivalry in Division I football history, these teams have met 128 times dating to 1890 and now trade the Paul Bunyan’s Axe trophy. This game has the second-highest average asking price on the secondary market, and this season’s game will give one team an all-time series advantage — they’re currently tied at 60-60-8 after Minnesota broke a 14-game Wisconsin win streak last season.