Where To Buy 2019 Maryland Football Tickets

Primary market tickets for Maryland home games are available through the Maryland website via primary partner Paciolan. There are three mini-pack option, including a Penn State and Indiana package that ranges in price for $86 for upper level to to $126 for lower level seats. The Michigan and Howard mini plan starts at $81 and goes up to $111. The school is also offering a three-game mini-plan starting at $135 which is the only way to get tickets to the Nebraska game.

On the secondary market TicketIQ has Low Price Guarantees on Maryland tickets for all games on the 2019 schedule, in addition to Low Price Guarantees on all college football tickets, which means that if you find a secondary market ticket for less on a site like StubHub or SeatGeek, we’ll give you 200% of the difference in ticket credit. TicketIQ customers save an average of 5%-20% compared to StubHub and SeatGeek.

How Much Are 2019 Maryland Football Tickets

Maryland is searching for its first season with a .500 or better record since 2016. Under their third head coach in as many years, the Terrapins will be led by Mike Locksley, as they look for their first bowl appearance in three years.

Tickets for Maryland home games on the secondary market are averaging $62 for home games at Capital One Field at Maryland Stadium, which is the Terrapins’ cheapest average ticket price since 2013. Maryland’s most expensive average ticket for a home game this season is for their matchup against Michigan, with Penn State a close second. Nebraska is the third-most expensive game on the secondary market, with the cheapest ticket under $80. 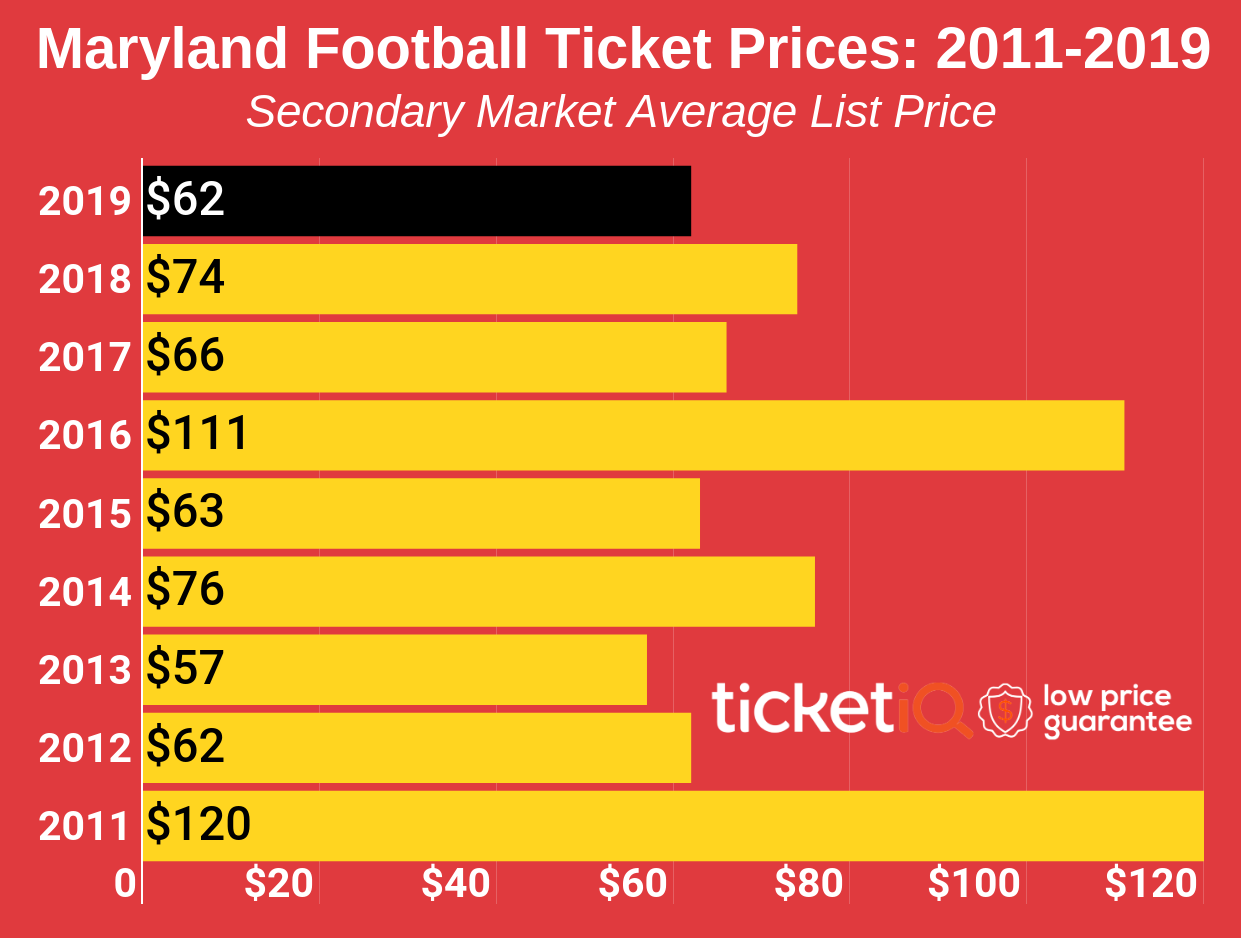 Prices For All Maryland Home Games On The 2019 Schedule

For just the second time ever, these football squads will take the field against each other. Maryland’s opener will be against Howard, as the Terrapins look to go 2-0 against the Bison, and the get-in price is just $5.

Maryland was in its first year in the Big Ten the last time it faced Syracuse. Maryland won the 2014 contest, 34-20, to stop a five-game losing streak to the Orange.

Maryland cannot seem to figure out the Nittany Lions, as the Terrapins have lost four consecutive meetings and have scored a total of just six points in the last two contests.

For a get-in price of just $5, fans can see the Terrapins host the Hoosiers. Each of the last three contests have finished with each team scoring more than 30 points. Last year’s meeting was a 34-32 loss in Bloomington.

Although Michigan has lost three consecutive bowl games, the Wolverines have been very successful against the Terrapins the last few years. Last year’s contest was a 42-21 victory for Michigan.

Before Maryland takes on Michigan State in its season finale in East Lansing, the Terrapins host the Cornhuskers for the first time in their history. The only previous meeting was in 2016 when Nebraska won, 28-7.