Where to Buy LSU Football Tickets

For the 2019 season, a variety of ticket-buying options are available directly from LSU. For fans looking to make a commitment, the school is offering a Flex Pass for $360, which includes seven passes. Tickets will be delivered digitally to your iPhone or Android mobile device prior to each game and seating location will vary from game to game. There's also a four-game pack available for $180, which includes a choice of Florida or Auburn,  a choice of Arkansas or Texas A&M and one of Georgia Southern, Northwestern State, or Utah State. The three-game mini-plan includes an option for Texas A&M and Arkansas, while the two-game pack includes only non-conference games.  Single game tickets are available for three non-conference home games, as well as the Arkansas game on November 23rd.

On the secondary market TicketIQ has Low Price Guarantees on LSU football tickets for all games on the 2019 schedule, in addition to Low Price Guarantees on all college football tickets, which means that if you find a secondary market ticket for less on a site like Stubhub or Seatgeek, we’ll give you 200% of the difference in ticket credit. TicketIQ customers save an average of 5%-20% compared to Stubhub and Seatgeek.

How Much Are LSU Tigers Football Tickets

LSU open their home schedule with games against Georgia Southern, Northwestern State, and Utah State before the marquee opponents come to Death Valley. As you would assume, their priciest tickets come against Florida and Auburn; those games are then followed by a cheaper game against Arkansas and a moderately priced match-up with Texas A&M.

Even for the priciest games, however, you can find deals on the secondary market. While the average resale price for the Florida and Auburn games are $423 and $375 respectively, get in prices start at $129 and $113. For early season games against lesser opponents, you can even get into the stadium for as low as $7.

Overall, LSU tickets on the secondary market are averaging $211 per seat for the 2019. It's the highest prices have been this decade, but is just $5 more than last year's average, and $1 more than the previous high water mark in 2011. 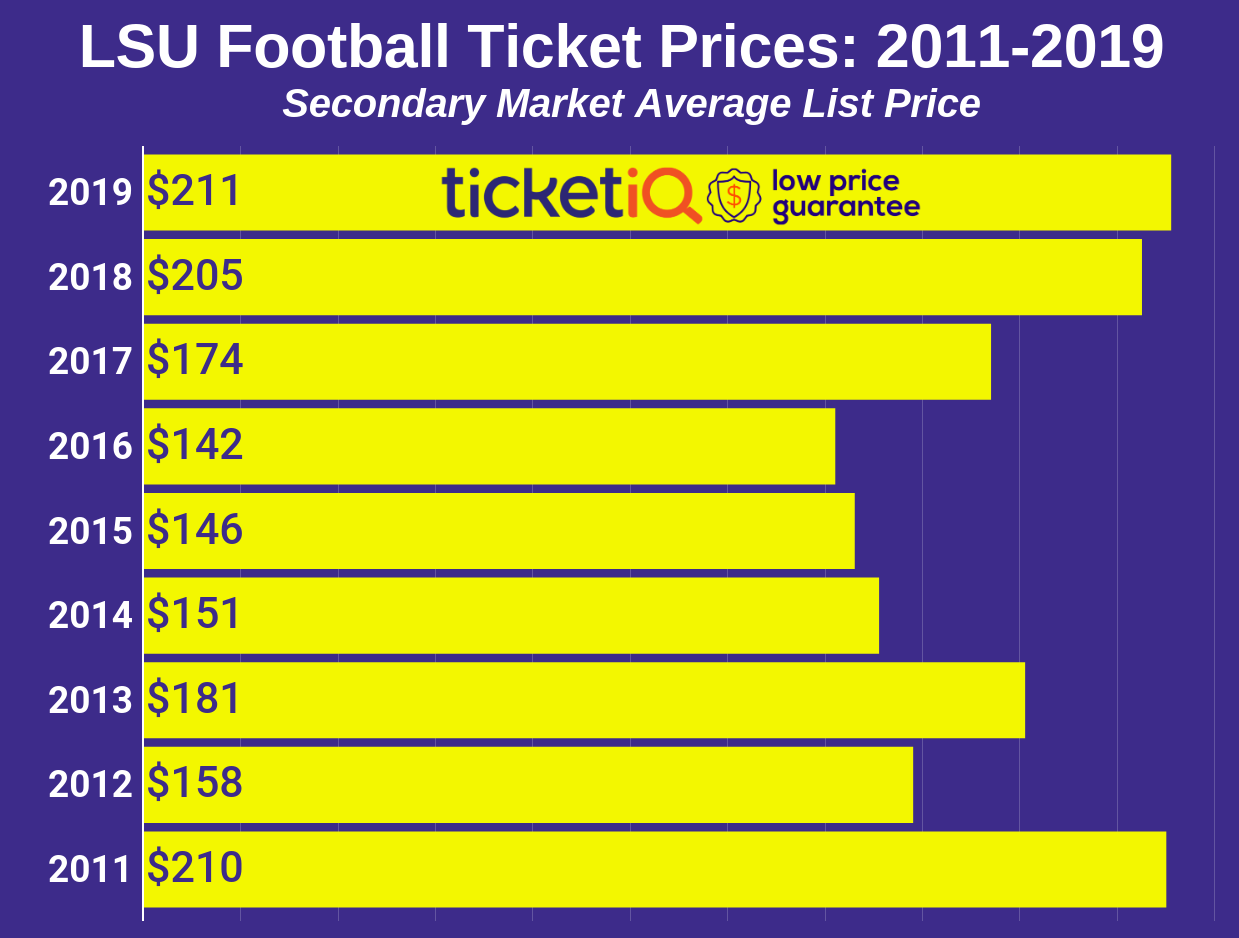 Ticket Prices for All LSU Home Games On The 2019 Schedule

LSU opens the season with a non-conference date with Georgia Southern. While the Eagles have played respectable games against some big time opponents—they’ve beaten Florida and hung tough with Georgia and Clemson—an upset is probably too much to ask of them.

Northwestern State comes into Baton Rouge after a 5-6 campaign in head coach Brad Laird’s first season. ESPN gives the Tigers a 99.8% chance of winning this one, so don’t go in banking on an upset.

Utah State put together a strong season in the Mountain West, but LSU represent another level of opponent. The Tigers hold a 2-0 lead in the all-time series; look for them to increase that this fall.

There’s a reason that LSU and Florida are permanent cross-division rivals. The Tigers have held the advantage in recent meetings but you can throw all that out once the whistle blows; these two teams never disappoint and that won’t change in October.

The Tiger Bowl is always a special occasion, so make sure to circle this one on your calendar. The past three meetings between these teams were decided by a total of 11 points, so you should be in for a good one if you score tickets.

While Arkansas has been slumping in recent seasons, both schools take the Battle for the Golden Boot seriously. LSU will be favorites to take home a fourth straight win, but don’t expect the Razorbacks to make it easy.

Last time these teams met, they put up 139 points over seven overtimes. While we can’t guarantee a similar showing this year, it’s safe to assume there will be some fireworks to wrap up the regular season. 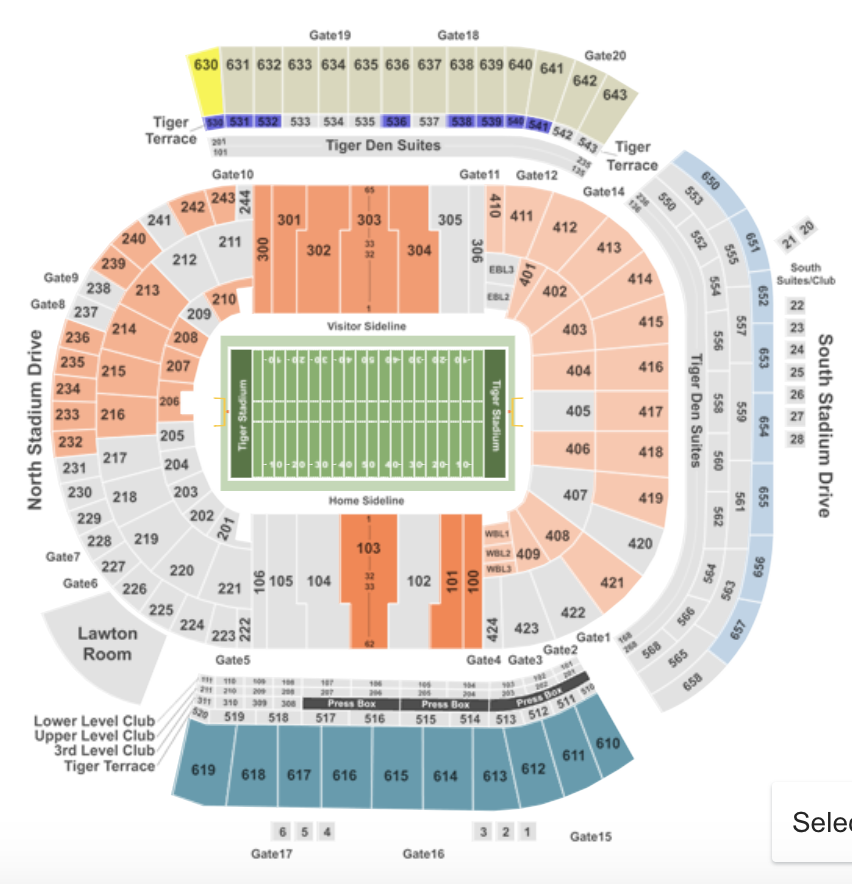 WHERE IS THE LSU SIDELINE?

The Tiger Stadium Student Section is located in sections 105 through 106, 202 through 205, and 218 through 236.  If you’re bringing children to the game, you may want to steer clear of sitting right next to these sections.
Student tickets sell out quickly since a limited amount are allotted to the student body. More importantly, you won’t be able to purchase student section tickets on the secondary market as only currently-enrolled LSU students are eligible for these seats. Student tickets are also only transferable to other LSU students.

Club seating at Tiger Stadium is located all throughout the stadium and gives fans a few different options that we’ve noted below.

The Stadium Club West is is located on the west side of the stadium and is a massive area that offers both exterior seating as well as interior lounge area seating that takes up 75,000 square feet over three levels.  All seats include chairbacks and the club features a complimentary buffet of apps, entrees, desserts and beverages, large, HD flat screen TVs, private restrooms.

The Stadium Club South is located on the stadium’s south side and these seats include chairbacks, complementary buffets of appetizers and snacks, a private club concourse that has various televisions as well as private restrooms.

If you’re a fan of the visiting team traveling to Baton Rouge to catch a game at Tiger Stadium, you’ll want to be sure to look for seats in the visitor seating areas located in sections 402 through 404.  If you’re a Tigers fan, make sure you avoid these areas!

The best seats are located in the sections closest to midfield such as sections 515-517 on the LSU side, or in sections 534-536 on the visitor’s side. These seats would give you a raised enough view to where you can see the entire play develop, while still having a great view of the entire field, not to mention chairbacks.