Primary market tickets for Yellow Jackets home games are available through the Georgia Tech website via primary partner Paciolan. There are multiple choices of season ticket packages available, which start at $219.

On the secondary market TicketIQ has Low Price Guarantees on Georgia Tech tickets for all games on the 2019 schedule, in addition to Low Price Guarantees on all College football tickets, which means that if you find a secondary market ticket for less on a site like StubHub or SeatGeek, we’ll give you 200% of the difference in ticket credit. TicketIQ customers save an average of 5%-20% compared to StubHub and SeatGeek.>

How Much Are 2019 Georgia Tech Football Tickets

Although the Yellow Jackets lost six games each in both 2017 and 2018, they played in a bowl last season. Georgia Tech lost the Quick Lane Bowl to Minnesota, 34-10. It was Georgia Tech’s first bowl loss since 2013.

Tickets for Georgia Tech home games on the secondary market are averaging $127, which is the school’s highest average price since 2015 and second-highest price of the decade. Georgia Tech’s most expensive home game this season is against the Georgia Bulldogs. 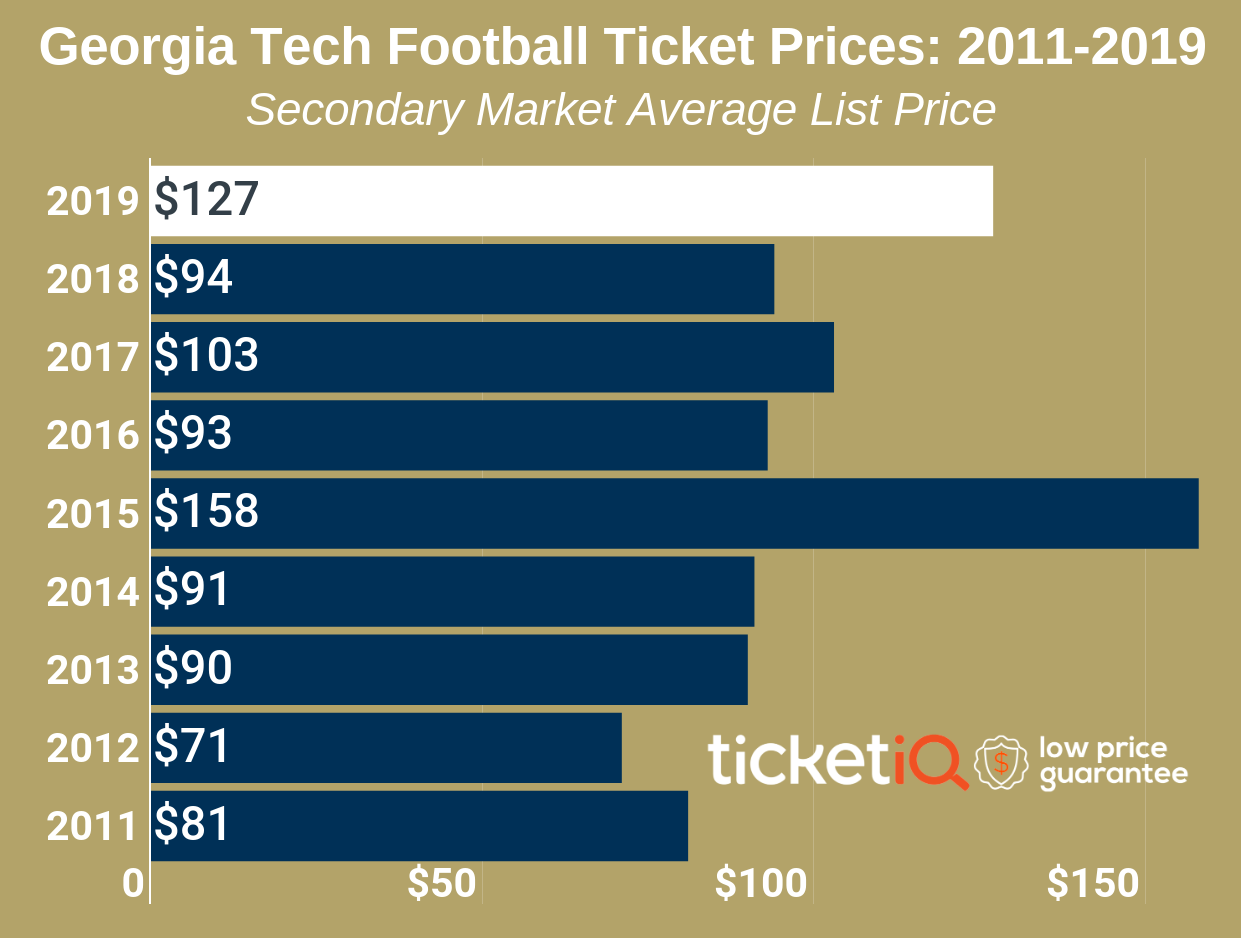 Prices For All Georgia Tech Home Games On The 2019 Schedule

These two squads faced off for the first time last year, and South Florida got the better end of the contest, 49-38. Now as the home team, Georgia Tech will seek revenge in its first game at Bobby Dodd Stadium this season.

The least expensive contest at home for Georgia Tech this season is against Citadel. The Yellow Jackets moved their record to 10-0 in meetings with the Bulldogs when they last faced each other in 2001.

The Yellow Jackets have recently been in control against the Tar Heels, as Georgia Tech has taken the last two contests from North Carolina. The Jackets dropped UNC, 33-7, two years ago at home and by the score, 38-28, last year at Chapel Hill.

Georgia Tech lost to Pittsburgh, 24-19, last year, but the Yellow Jackets won by 18 points the prior year in Atlanta. Each of their three losses to the Panthers since 2015 have been by fewer than five points each.

Georgia Tech has had the upper hand recently in what is known as the “TechMo Bowl.” The Yellow Jackets have won each of the last three years, and two of the victories were by double digits. They will look to repeat last year’s 49-28 drubbing of the Hokies.

Georgia Tech last faced North Carolina State in 2014 and extended its winning streak to two games over the Wolfpack. The Yellow Jackets will be hosting NC State for the first time since 2010.

The most expensive contest at Bobby Dodd Stadium has a unique name to its rivalry: “Clean, Old-Fashioned Hate.” Georgia has been dominant each of the last two years and has won every year they’ve played on the road against Georgia Tech since 1999. The Yellow Jackets will be looking to shock the world in their season finale against the preseason No. 4 team.


TicketIQ is committed to the cheapest tickets possible, and we make much less on sold out tickets compared to other major marketplaces like StubHub and Vivid. That means ticket buyers save from up to 25% on TicketIQ on sports, music and theater. We're able to do this because we also work with teams, venues, and other ticket owners, to help them sell tickets at face price, directly to consumers like you, through Ticketmaster and Paciolan. For an overview of the 2019 NFL Ticket Buying landscape, and details on the cheapest way to get tickets for every preseason top 25 team, visit the TicketIQ Blog.