Where to Buy Georgia Football Tickets

Like most other major football programs, Georgia’s season tickets are linked with a fund, in this case the William C. Hartman Jr. Fund. Making a donation to the fund allows you to receive a priority ticketing application, but nothing is guaranteed beyond that. Sanford Stadium was completely sold out last season and the school doesn’t currently offer an estimate of how many points will be required to get tickets for the upcoming season. Last year, you needed 23,900 points to receive two renewable tickets, so you’re likely looking at a sizable donation.

A limited amount of single game tickets for Georgia’s games against lesser opponents are also available through the same fund. While each donation level is able to request a different number of seats for each game, everyone will need 100 points to make the order.

On the secondary market TicketIQ has Low Price Guarantees on Georgia football tickets for all games on the 2019 schedule, in addition to Low Price Guarantees on all college football tickets, which means that if you find a secondary market ticket for less on a site like Stubhub or Seatgeek, we’ll give you 200% of the difference in ticket credit. TicketIQ customers save an average of 5%-20% compared to Stubhub and Seatgeek.

How Much Are Georgia Football Tickets

This season, Georgia play two marquee home games surrounded by cheaper ones against lesser opposition. They open the season with two games against Murray State and Arkansas State before the big boys, Notre Dame and South Carolina, come to town. The home schedule then wraps up with visits from Kentucky, Missouri, and Texas A&M.

For the second straight season the Bulldogs lead the nation in terms of secondary market average list price. This year, that average price is over $480 per ticket. However, you can find deals on the secondary market. While virtually every game has get-in prices at least 50% cheaper than the average resale price, some games provide particular bargains. The Kentucky and Missouri games, for example, are a chance to see solid opponents for only $66. 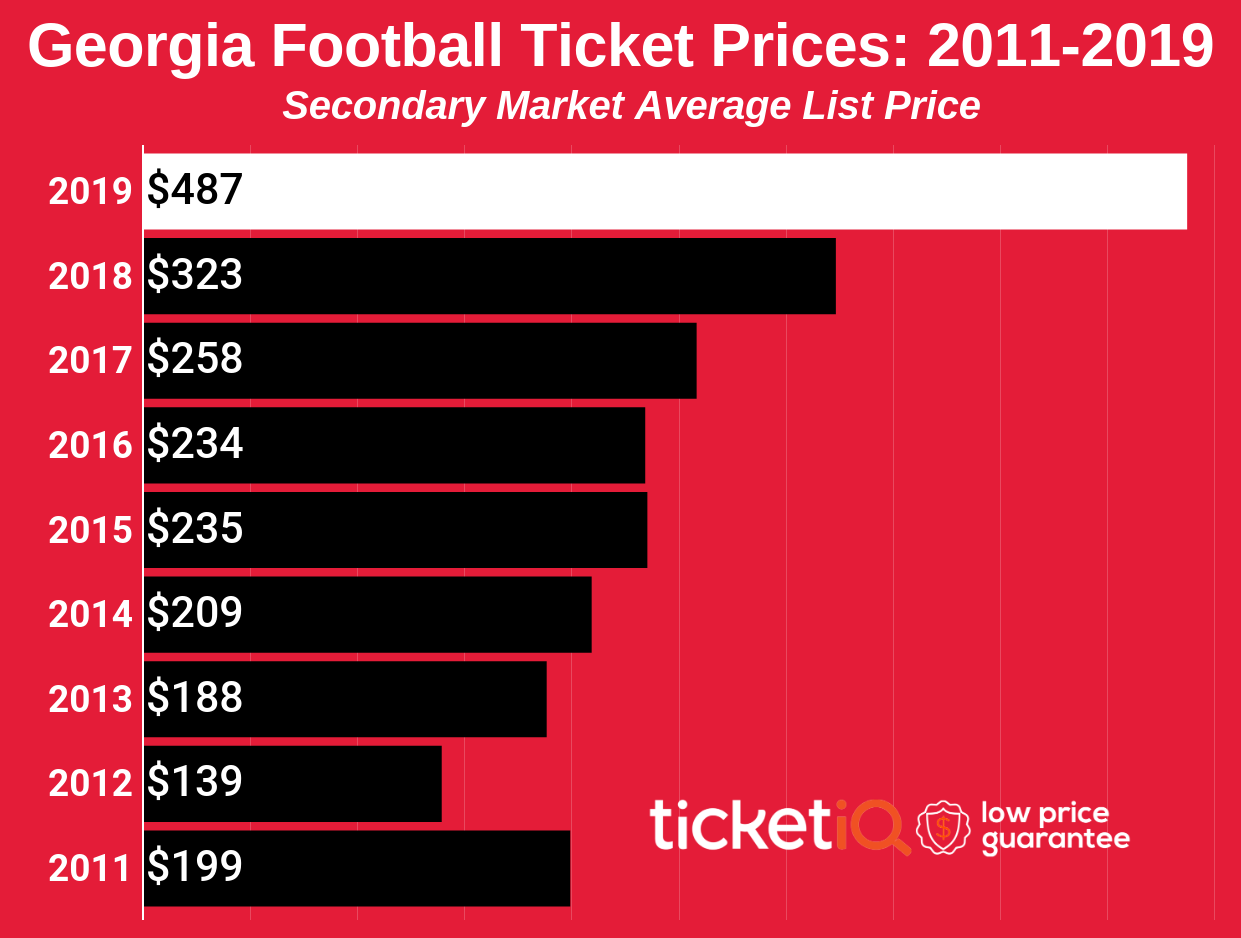 Ticket Prices for All Georgia Home Games On The 2019 Schedule

Getting off to a good start is key for any program, let alone one with serious postseason aspirations. After a tough season opener at Vanderbilt, UGA will look to—and most likely will—do just that against Murray State.

Arkansas State put together a solid season in the Sun Belt Conference last season, but they won’t throw anything at Georgia that they can’t handle in this one.

We’ll just let the ticket prices for this game speak for themselves. Two major programs meet on a September Saturday; as a football fan, you can’t ask for much more than that.

Georgia’s next home game brings another major program to Athens. The Bulldogs have dominated recent history against USC and shouldn’t have much trouble in this game on paper, but anything can happen in a rivalry game.

You probably thing of Kentucky as a basketball school, but their football program is gaining momentum each season. Georgia will still be favored, but it might be a closer game than some fans are expecting.

These teams have only met a handful of times in recent history, with UGA winning all but one of the match-ups. Based on the schedule, however, this game could shape up as a trap game; neither fans nor players should overlook it.

This is the first meeting between the Bulldogs and Aggies since the 2009 Independence Bowl. Expect Georgia to be a favorite but, with both teams potentially having postseason aspirations on the line, neither team will concede a yard easily.