Sorry! There are currently no tickets available for Gator Bowl.

The Tennessee vs. Indiana Gator Bowl game is proving popular with fans and tickets remain in only a handful of sections for a game that will get fans from both teams out of the cold at TIAA Bank Stadium in Jacksonville, Florida on January 2.

Tennessee and Indiana have little history -- the teams have met only one other time, in 1988 at the Peach Bowl, and the Vols won, 27-22.

Where To Buy Gator Bowl Tickets

On the secondary market TicketIQ will offer fans a Low Price Guarantee on all sold out Gator Bowl tickets in addition to Low Price Guarantees on all sold out college bowl games and college football playoff tickets. That means that if you find a secondary market ticket for less on a site like StubHub or Vivid, we’ll give you 200% of the difference in ticket credit. TicketIQ customers save up to 25%.

Below is a screenshot of secondary market inventory annd get-in price by zone for this year's Gator Bowl. 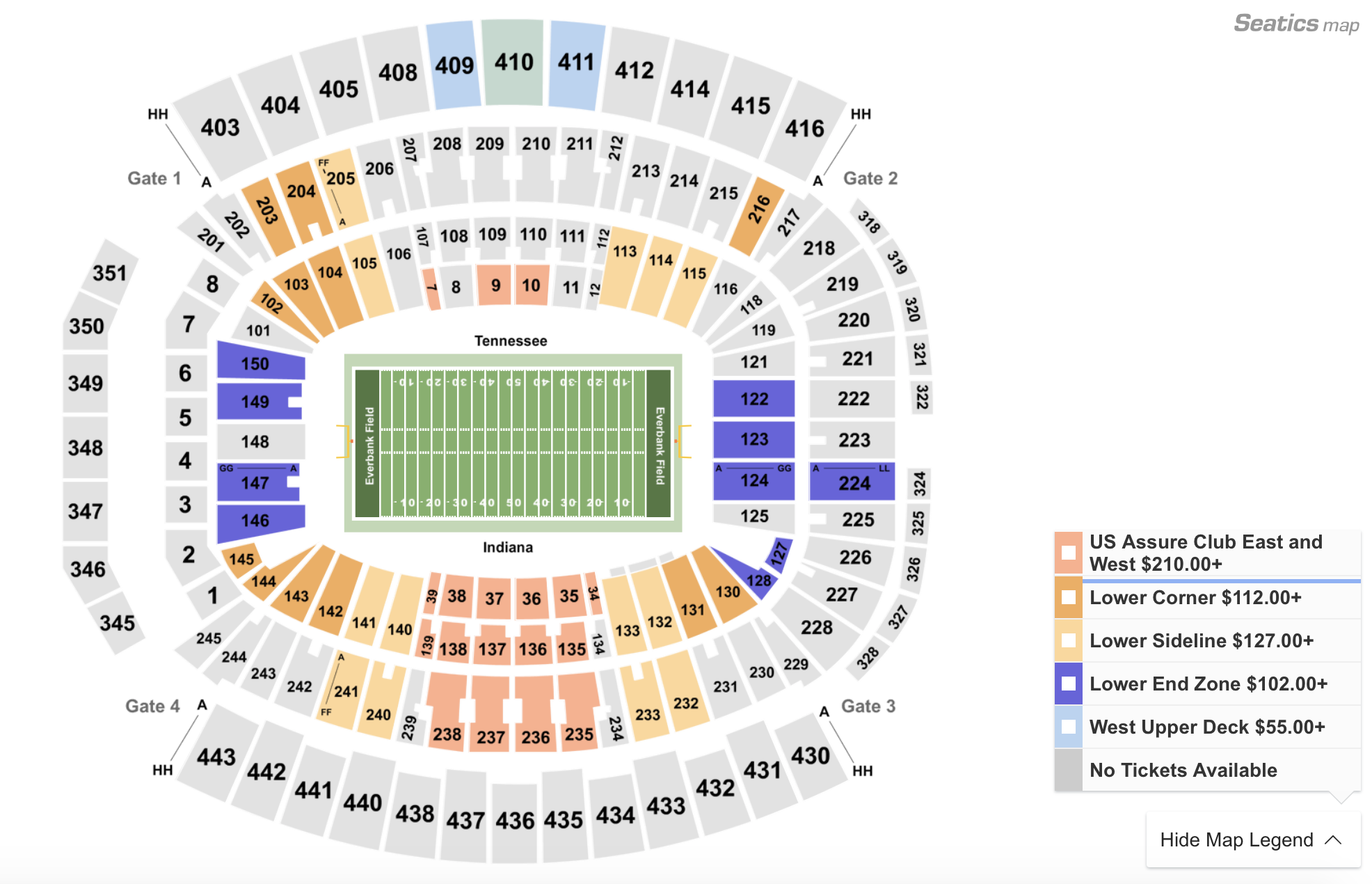 How Much Are Gator Bowl Tickets

On Ticketmaster, seats remain in five sections. Fans can get in for $28.75 in one of the four 400-Level sideline sections available for $83.75 in Section 233, Row X above the 20-yard line on Indiana side of the stadium.

The average asking price on the secondary market is $184 and the cheapest seat is $55. Among the more well-known bowl games, the Gator Bowl is the second cheapest behind $165 for the Outback Bowl. The priciest non-College Football Playoff bowl game is $536 for the Rose Bowl.

On the secondary market, the average asking price is $220 and the cheapest seat is $55 in West Upper Deck 410, Row P at the 50-yard line on the Tennessee side. A handful of Club Seats remain on the 200 Level, starting at $210 in US Assure Club East and West 237 above the 40-yard line on the Tennessee side. Club ticket holders get access to lounges, premium food and beverage and other amenities. The priciest seat still available is in Lower Sideline 114, Row A at the 10-yard line for $664.

Below is a look at the secondary market get-in price for the Gator Bowl since 2010. 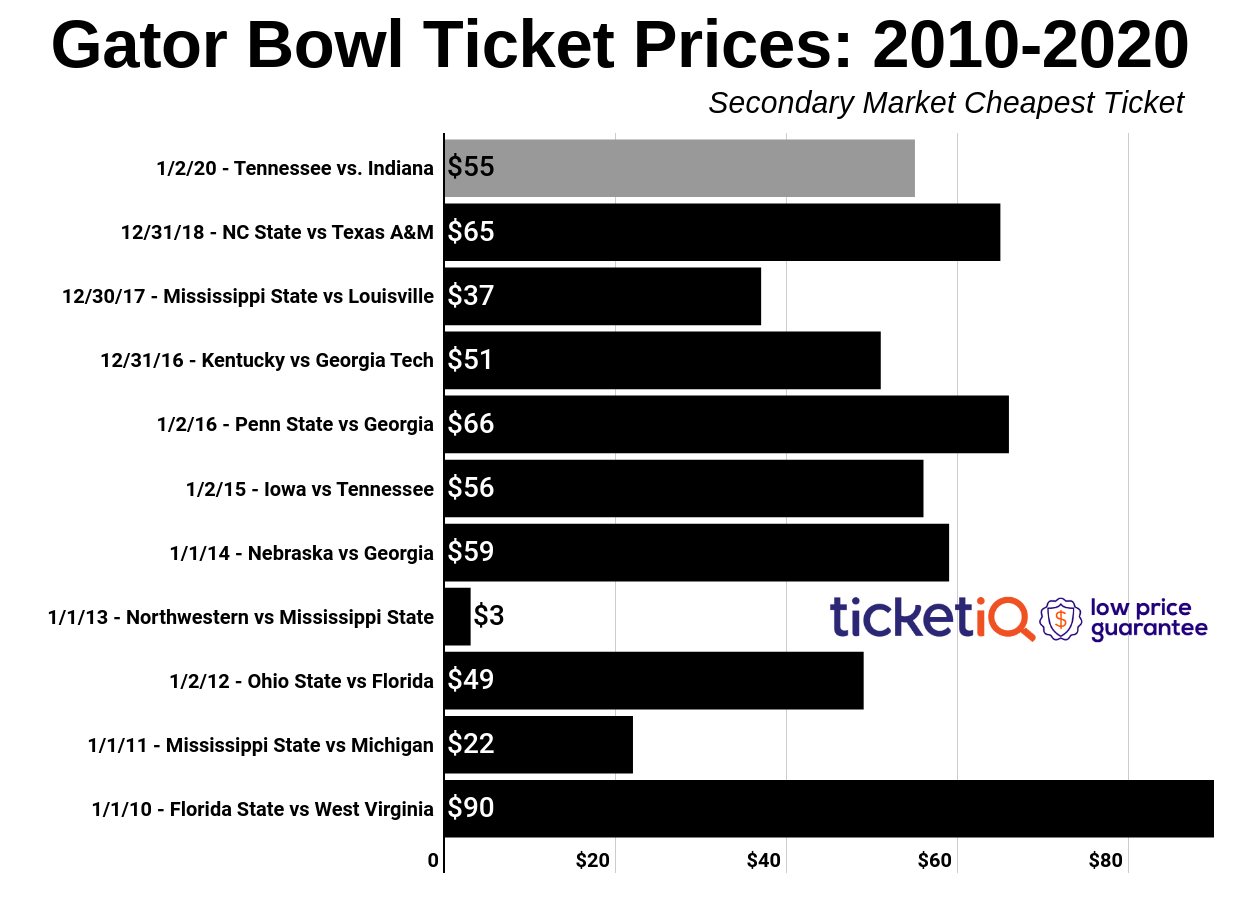 TicketIQ is committed to Transparent Ticketing, and we make much less on 'sold out' tickets compared to other major marketplaces like StubHub and Vivid. That means ticket buyers save from as much as 25% on TicketIQ for sports, music and theater tickets. We also back it up with our Low Price Guarantee! We're able to do this because we also work with teams, venues, and other ticket owners, to help them sell tickets at face price, directly to consumers like you, through Ticketmaster, Frontgate, Eventbrite and others ticketing platforms. Learn more by reading our College Football Playoff tickets Buying Guide that we think is the most objective advice on where to find the best deals on concert tickets, whether they're 'sold out' on TicketIQ or 'unsold' on the primary ticket market.