Where to Buy Florida Football Tickets

No matter where you choose to sit, a Florida football season ticket costs $380. The true meat of the price, however, comes in the form of a required Booster Club donation. That donation scales based on seating location; seats in the upper bleachers only require a $50 annual contribution, but the best club seats in the house cost an extra $2850 on top of your $380. All season tickets also have a $15 processing fee.

A limited amount of single game tickets for Florida’s home games are available on Ticketmaster, but availability is limited. Also, make sure you’re looking at standard tickets rather than resale tickets; both are displayed together by default so you could pay extra if you’re not careful.

On the secondary market TicketIQ has Low Price Guarantees on Florida football tickets for all games on the 2019 schedule, in addition to Low Price Guarantees on all college football tickets, which means that if you find a secondary market ticket for less on a site like Stubhub or Seatgeek, we’ll give you 200% of the difference in ticket credit. TicketIQ customers save an average of 5%-20% compared to Stubhub and Seatgeek.

How Much Are Florida Football Tickets

Like most other teams, Florida plays three types of home games this season. They have three games against two non-conference opponents plus Vanderbilt, three mid-tier games against Florida State, Auburn, and Tennessee, then one marquee neutral site game against Miami. That means anyone should be able to see a Gators game at any price point this season.

Overall, secondary market Gators tickets are averaging $218 for the 2019 season, the most expensive they've been this decade. 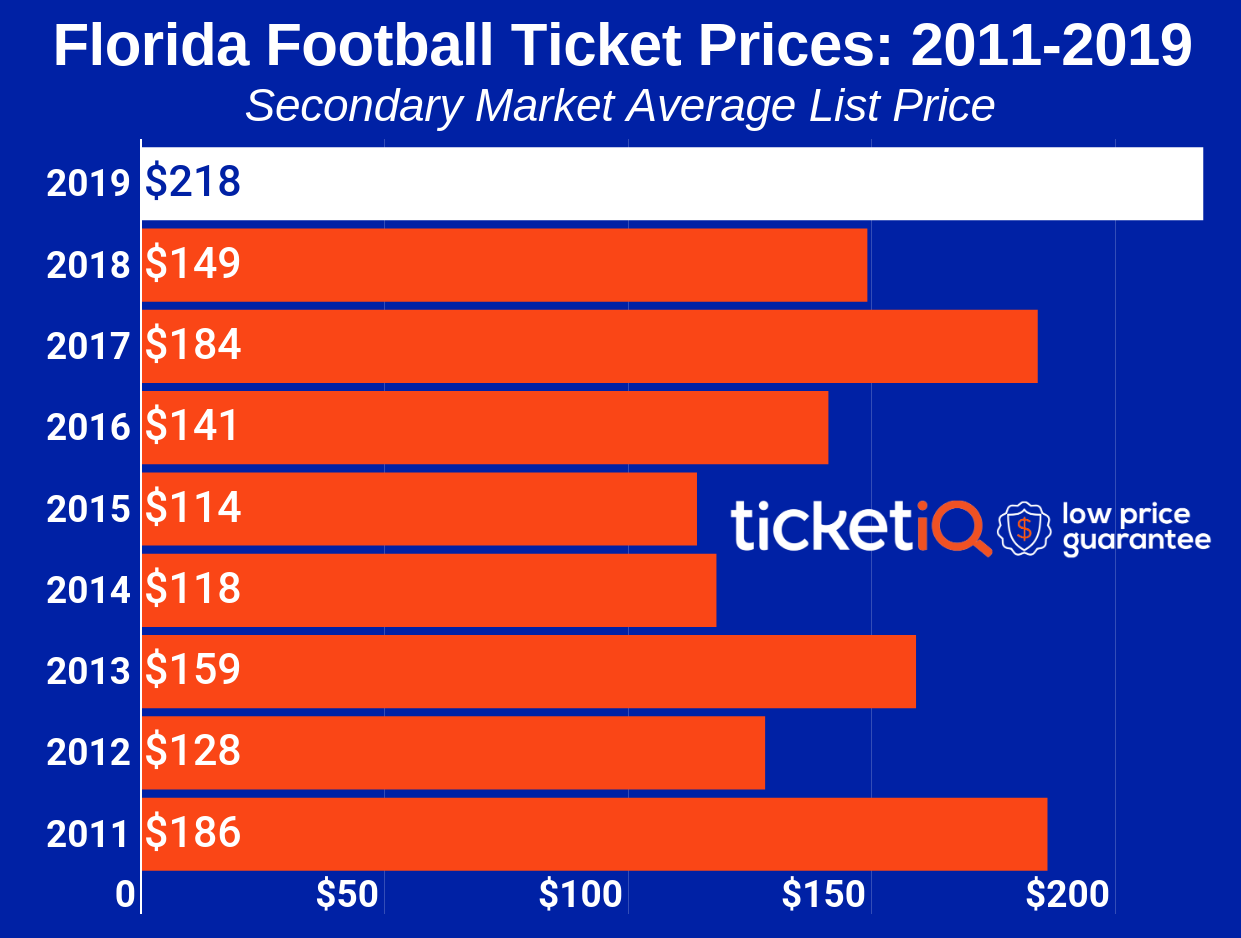 Ticket Prices for All Florida Home Games On The 2019 Schedule

There’s no better way to start off the college football season than a massive rivalry game. Miami has dominate the series historically but the two schools haven’t played for nearly six years, so both teams will be looking to make a statement.

Last year, the Skyhawks finished next to last in the Ohio Valley conference with a 2-6 record (2-9 overall). Look for the Gators to take care of business early here and move on to the next one.

Florida’s next major rival comes to town on the traditional third Sunday of September. The Gators have won 13 of the last 14 meeting between the schools, but the game always is worth watching. There’ll be some fireworks here.

Towson’s put together some solid seasons in the Colonial Athletic Association but, unless something goes seriously wrong in Gainesville, FCS school isn’t going to give Florida any problems.

While these old rivals haven’t met since 2011, Auburn has won their last three meetings and 43 of their 83 all-time games. Home field has played a big role in the series, however, so this one could come down to the wire.

Vandy’s been producing some NFL players lately, but they haven’t been able to push into the top tier of the SEC. A win in the swamp would send a message to the conference, but Florida will probably be too much to handle.

Florida starts their regular season with a bang and ends it with another. Last season, they hung 41 points on the Seminole defense, so FSU will be making a point to prevent a similar outcome this year. Regardless of who you support, this is a game to key in on.