Where to Buy Clemson Football Tickets

Single game tickets via primary partner Paciolan are available for all games other than the Texas A&M games, which is sold out.  Face value ticket prices for tickets directly from the team range from $40 to $100, for the Florida State game. Full season tickets cost $499, but are only available in the five upper level corner sections. Two three-game mini-packages were also available before the single game onsale, but both are now completely sold out. While the fact that there are 'unsold' tickets available for the reining National Champs might come as a surprise,  it's actually part of a broader 'direct-to-fan' trend in the ticketing world. The 2019 college football buying guide on the TicketIQ Blog has details on ticket-selling strategies for all of the top 25 teams in 2019.

On the secondary market TicketIQ has Low Price Guarantees on Clemson football tickets for all games on the 2019 schedule, in addition to Low Price Guarantees on all college football tickets. That means that if you find a secondary market ticket for less on a site like Stubhub or Seatgeek, we’ll give you 200% of the difference in ticket credit. TicketIQ customers save an average of 5%-20% compared to Stubhub and Seatgeek.

How Much Are Clemson Football Tickets

Clemson really only has two expensive home games at Clemson Memorial Stadium: Texas A&M and Florida State. Beyond those two games, the main question to consider is value versus quality of the opposition. Do you prefer to only spend about $20 a ticket? Or would you rather spend closer to $50 to see a better game?

No matter which game you choose, however, there are deals to be had on the secondary market. For the lesser games, the cheapest tickets at Clemson Memorial Stadium start at $18 for the next to last home game of the season against Wofford.

Overall, Clemson football tickets are averaging $217 on the secondary market, good for 11th in the nation. That's also the highest they've been this decade. 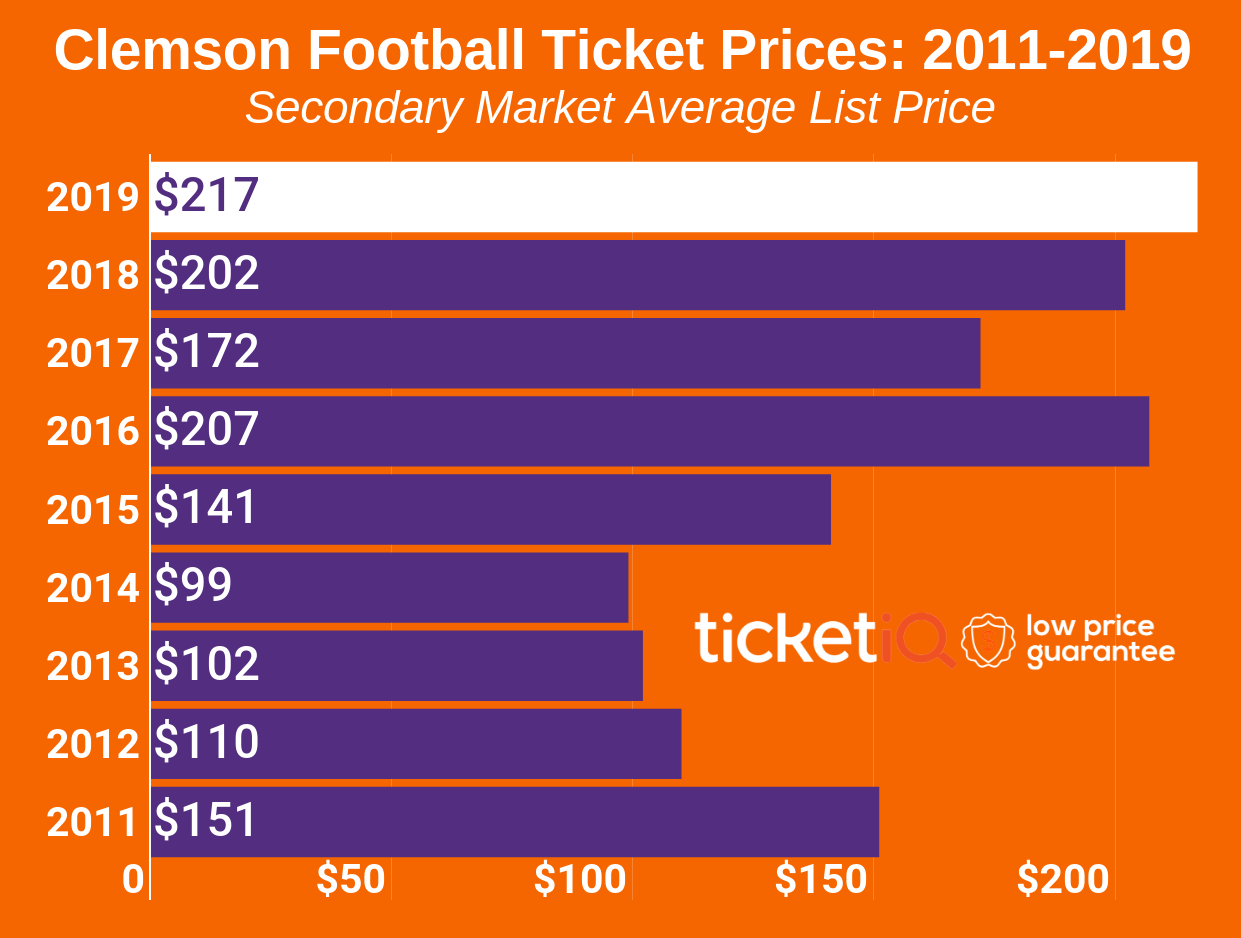 Ticket Prices for All Clemson Home Games On The 2019 Schedule

There’s nothing like a local rivalry to kick off the season and that’s what Clemson has in this one. Despite the rivalry, this series has been pretty one-sided lately and this one shouldn’t be a problem for the Tigers.

Jimbo Fisher coached the Aggies to a 9-4 record and number 16 ranking in his first year in College Station; he’ll be looking to make an early season statement by taking down best team in the country. Clemson will have an edge, but this game could be a close one.

After a mediocre season in Conference USA, UNC Charlotte fired head coach Brad Lambert and replaced him with Will Healy. Healy orchestrated a massive turn-around at Austin Peay, but he’ll need to me a miracle worker to get a result against Clemson.

The Bowdens may have moved on, but this rivalry still has some juice. Clemson have won four straight games and embarrassed the Seminoles last year, so Florida State will be out for revenge. The Tigers will still be favored to take care of business, though.

Given the respective stature of the two programs, Clemson is a safe bet to take home this year’s O’Rourke-McFadden Trophy. The last time the Tigers lost this game was in 2010 and that doesn’t look set to change anytime soon.

Wofford might be a solid FCS team, but Clemson is one of the best teams in the country. In theory there’s always the chance of an upset, but don’t bet on one in this game.

This match-up would make a good basketball game, but there’ll only be one winner on the gridiron. Clemson should cap off their home schedule with a comfortable W before moving on to bigger postseason aspirations.

TicketIQ is committed to the cheapest tickets possible, and we make much less on sold out tickets compared to other major marketplaces like StubHub and Vivid. That means ticket buyers save from up to 25% on TicketIQ on sports, music and theater. We're able to do this because we also work with teams, venues, and other ticket owners, to help them sell tickets at face price, directly to consumers like you, through Ticketmaster and Paciolan.