Sorry! There are currently no tickets available for Arkansas Razorbacks Football.

Where to Buy Arkansas Football Tickets

Unlike other schools, Arkansas actually has two season ticket packages. The primary option is the Fayetteville Season Ticket, which includes seats to all home games at Razorback Stadium. Prices for those plans range from $250 in the upper deck to $1500 behind the north end zone; most seats also require a minimum per seat donation and a minimum donor member class, so make sure to consider those factors when choosing a seat. The other option is the Little Rock Ticket, which provides a seat to only the game against Missouri in Little Rock. Understandably, those seats are cheaper with seats ranging from $40-$50 with minimal required donations.

Regardless of your ticket plan, you should be on the lookout for seats in the East or South Indoor Clubs if you want a more premium game day experience. While the views will differ in each section, both offer covered seats, chairs with backs, and access to an indoor club lounge.

On the secondary market TicketIQ has Low Price Guarantees on Arkansas football tickets for all sold out games on the 2019 schedule, in addition to Low Price Guarantees on all college football tickets, which means that if you find a secondary market ticket for less on a site like Stubhub or Seatgeek, we’ll give you 200% of the difference in ticket credit. TicketIQ customers save an average of 5%-20% compared to Stubhub and Seatgeek.

How Much Are Arkansas Razorbacks Football Tickets

As mentioned above, there’s a decent primary market for Razorbacks tickets. While supplies might dwindle as opening day approaches, you currently have your choice of seats for every game, ranging from the cheapest against non-conference opponents, to the priciest against Auburn.

Primary market single game tickets are broken down into three tiers. For non-conference games, prices range from $35 in the upper deck to $250 for field level seats in the north endzone. The game against Mississippi State has higher prices, ranging from $55 to $300, and the game against Auburn is the priciest of all with seats going between $60 and $300.

On the secondary market, however, savings are available for every game except the meeting with Auburn. Get-in prices for most games hover between $20 and $40, with Western Kentucky and the Tigers’ visits being outliers on the low and high side, respectively. The get-in price for the Western Kentucky game is $19, while the get-in vs. Auburn is $71.

Overall, Arkansas tickets at Razorback Stadium are averaging $134 per ticket for the 2019 season, which is good for 25th most expensive in the nation. 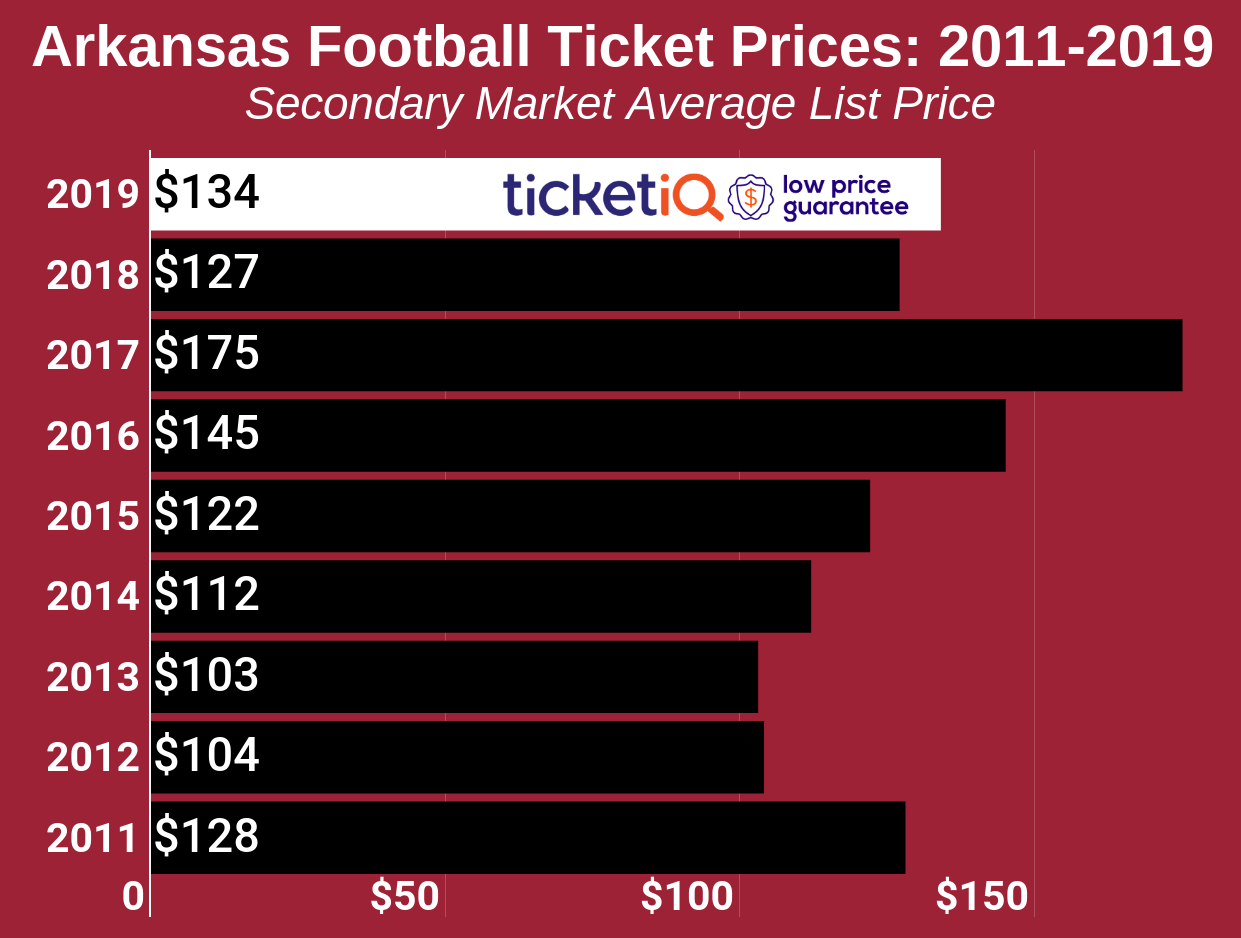 Prices for All Arkansas Home Games on the 2019 Schedule

With Portland State near the bottom of the Big Sky Conference, any chance of an update in this one is slim. It’ll presumably just be a warm-up for the Razorbacks before they move on to bigger games.

After a visit to Ole Miss, the Razorbacks return home for a date with the Colorado State Rams. The Mountain West might be one of the best conferences outside of the Big Five, but don’t bet on the visitors pulling off an upset in this one.

Another Mountain West opponent visits Arkansas the next weekend and the result should be the same. The Spartans finished last season 1-11, so they’ll surely struggle in Razorback Stadium.

This game is unarguably the highlight of the Razorbacks’ home schedule, but it’s not a game that they’re expected to win. Last year, the Tigers thumped them 3-34; expect Arkansas to make a better showing at home, but they probably won’t have enough to make up the gap.

This game will be another challenge for Arkansas. Mississippi State might not be a national power, but they’ve got a strong program; they finished last season ranked in the Coaches Poll and beat the Razorbacks 6-52. This could easily be another loss for Arkansas unless they come out ready to make a statement at home.

After some tough SEC games, Arkansas get to wrap up their Fayetteville home schedule with a non-conference visit from Western Kentucky. The programs have never met before but, given the Hilltoppers performance last year, this is a prime chance for the Razorbacks to get back on track.