Where To Buy 2019 Arizona Football Tickets:

Primary market tickets for Wildcats home games are available through the Arizona website via primary partner Paciolan. There are multiple choices of season ticket packages available, which start at $70 and just $35 for children ages 3 to 12. Arizona also has two Mobile Passes, priced at $70 and $150. The Wildcat Mobile Passes provide access to all Arizona home games and your seats will differ each game, with tickets and seat location delivered digitally via your mobile device 24 hrs prior to kickoff. In addition, there is a flex pack that allows for 2 Pac-12 Conference games and one non-conference games. Single-game tickets are available for every game, with tickets starting as low as $8 for upper level seats in section ES 208 to $275 for lower level tickets in section 105, which is right in the 50-yard line.

On the secondary market TicketIQ has Low Price Guarantees on Arizona football tickets for all games on the 2019 schedule, with tickets prices slightly above face value across most price categories. In addition to Arizona, TicketIQ has Low Price Guarantees on all college football tickets, which means that if you find a secondary market ticket for less on a site like StubHub or VividSeats, we’ll give you 200% of the difference in ticket credit. TicketIQ customers save an average of 5%-20% compared to other major secondary marketplaces.

How Much Are 2019 Arizona Football Tickets:

Kevin Sumlin enters his second season as the Arizona head coach after a disappointing 5-7 season. The Washington Huskies visit Arizona on October 12 for the priciest Wildcat home game this season, but the price is only slightly higher than that of other contests. 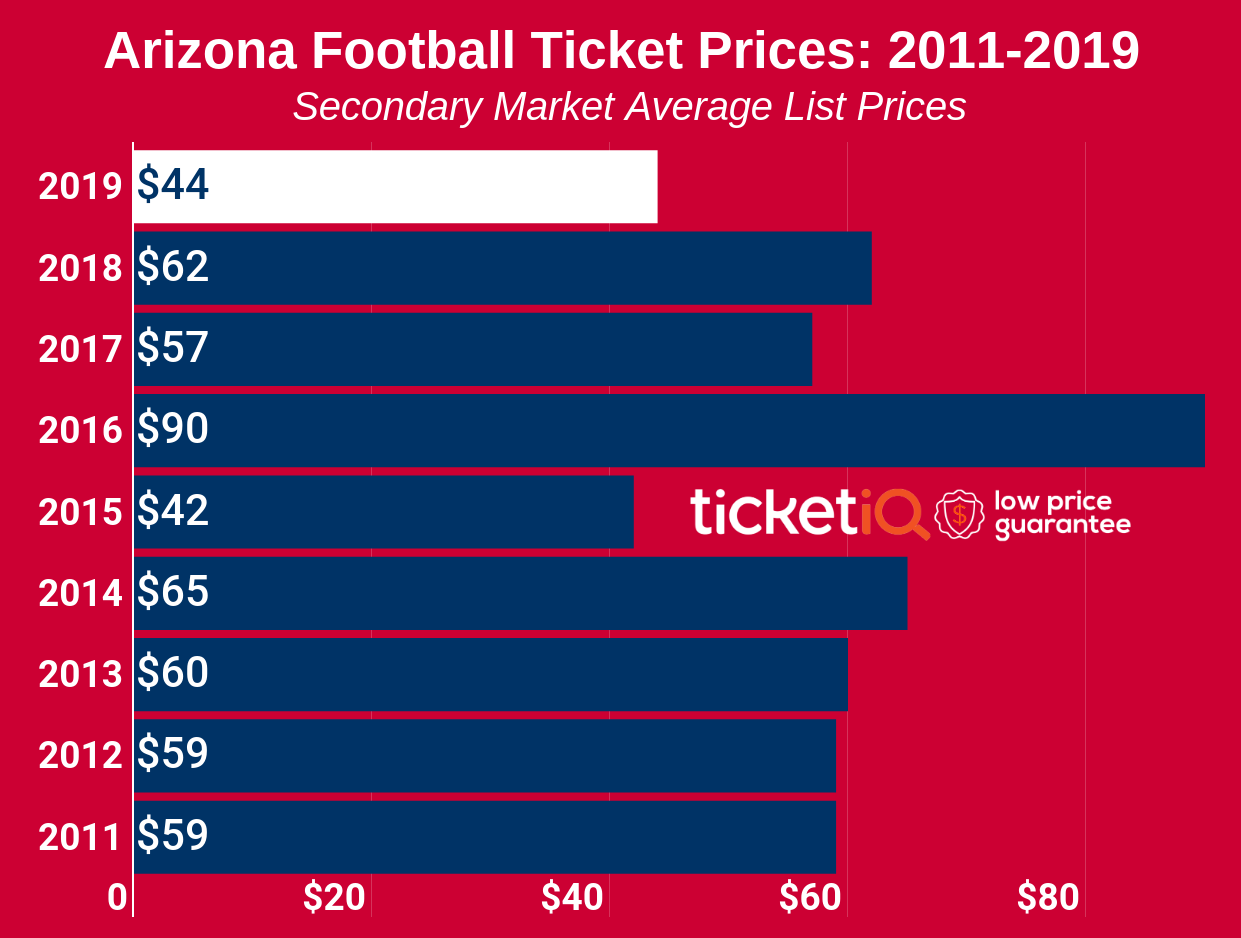 Ticket Prices For All Arizona Football Home Games On The 2019 Schedule:

Arizona takes on the Lumberjacks for the Wildcats’ home opener, as Arizona looks to extend its winning streak against Northern Arizona. This contest will be the cheapest ticket for any contest at Arizona Stadium this season.

For the first time since 1989, the Wildcats will face the Red Raiders, who have a new coach in Matt Wells. The Big 12 foe has not posted a .500 or better record any of the last three seasons.

The last time Arizona hosted UCLA, the Wildcats stopped a five-game losing streak to the Bruins with a 47-30 victory in 2017. However, UCLA returned the favor one year later with a 31-30 win.

The most expensive contest at Arizona Stadium this season will be when the Wildcats host the Huskies. Washington stands at No. 14 in the preseason poll. Arizona lost, 35-28, when the Wildcats last faced the No. 9 Huskies in 2016.

Arizona has a two-game winning streak against Oregon State and has won each of the last two contests by 21 points. The Wildcats will look to continue their recent success on November 2.

Arizona put together four wins in a row over Utah from 2012 to 2015, but the Utes have won each of the last three meetings, including 2018’s 42-10 win. The Wildcats will look for revenge at the end of their home regular season schedule.