Primary market tickets for ASU football are available through partner Ticketmaster. Season tickets and mini plans are currently on sale. Single-game tickets will go on sale beginning in early August. Currently,  there are two mini plans available starting at $99 and going up to $125. The Pitchfork Plan includes games against Colorado, Oregon and USC while the the Sun Devil Plan includes games against Arizona, Sacramento State and Washington State.

On the secondary market TicketIQ has Low Price Guarantees on Arizona State football tickets for all games on the 2019 schedule, in addition to Low Price Guarantees on all college football tickets, which means that if you find a secondary market ticket for less on a site like Stubhub or Seatgeek, we’ll give you 200% of the difference in ticket credit. TicketIQ customers save an average of 5%-20% compared to Stubhub and Seatgeek.

Fans interested in season tickets,  not only get to pick their seats, but have the option to purchase parking, are entitled to priority bowl game, postseason and away game tickets, and get invites to exclusive season-ticket holder events. Season tickets start at $175 for seats in the 300 sections high above the sideline.

How Much Are Arizona State Football Tickets

Coming off two consecutive seasons in which it got to bowl games and entering former NFL coach Herm Edwards’ second season, tickets for Arizona State University football are at a premium. According to data from TicketIQ, the $108 average asking price on the secondary market is tied for the second highest of the decade with the 2013 season. The priciest season was 2015, when fans paid $118 following a 10-3 season in 2014. 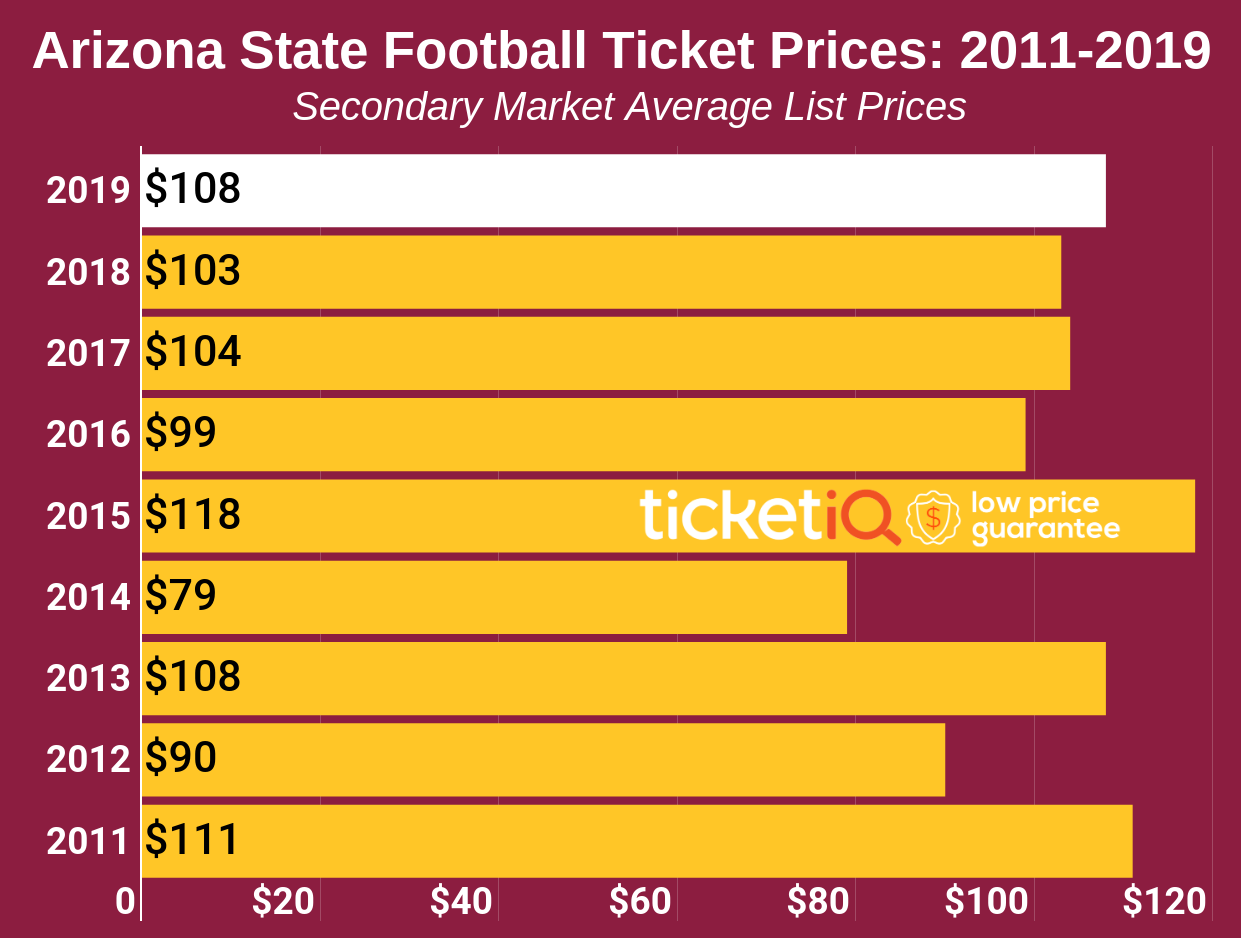 ASU tickets are the 36th most expensive across the NCAA. Last season, the Sun Devils finished second in the Pac-12 South and got a berth to the Las Vegas Bowl after a 7-6 season.

This game is the second cheapest of the season in terms of average asking price, and the cheapest in terms of get-in price. ASU and Kent State have never played before, and the game is the first of four during which ASU will play non-conference teams before opening Pac-12 play at Cal on September 27.

The cheapest game of the season at Sun Devil Stadium, this game marks the second time the teams have played. Sacramento State last visited Sun Devil Stadium on September 5, 2013, and lost, 55-0.

The second-priciest home game this season, the Sun Devils and Trojans have played 34 times dating to 1978. The teams have played every season since 1995, and ASU broke a three-game USC win streak last season with a 38-35 victory at the L.A. Coliseum on October 27, 2018. USC holds an all-time series advantage of 21-13.

Sometimes called the “Duel in the Desert,” the winner of this game gets the Territorial Cup. The game is the priciest of the season, both in terms of secondary market average asking price and get-in price. The rivalry dates to 1899 and is among the oldest in college football. Arizona has a 49-42-1 all-time series advantage, but Arizona State slipped past the Wildcats, 41-40, last November, and have won two consecutive.