Where To Buy Alabama Football Tickets

College football’s most dominant dynasty just got a little more expensive. Demand for Alabama football tickets is up nearly 10% over last season, according to secondary ticket marketplace TicketIQ.com.

The Crimson Tide kicks off their home schedule in Tuscaloosa on September 7 against New Mexico State. The average asking price on the secondary market for a ticket to Bryant-Denny Stadium is $249 versus $192 last year. Alabama is ranked No. 3 in terms of college football ticket prices on the secondary market heading  into the 2019 season. 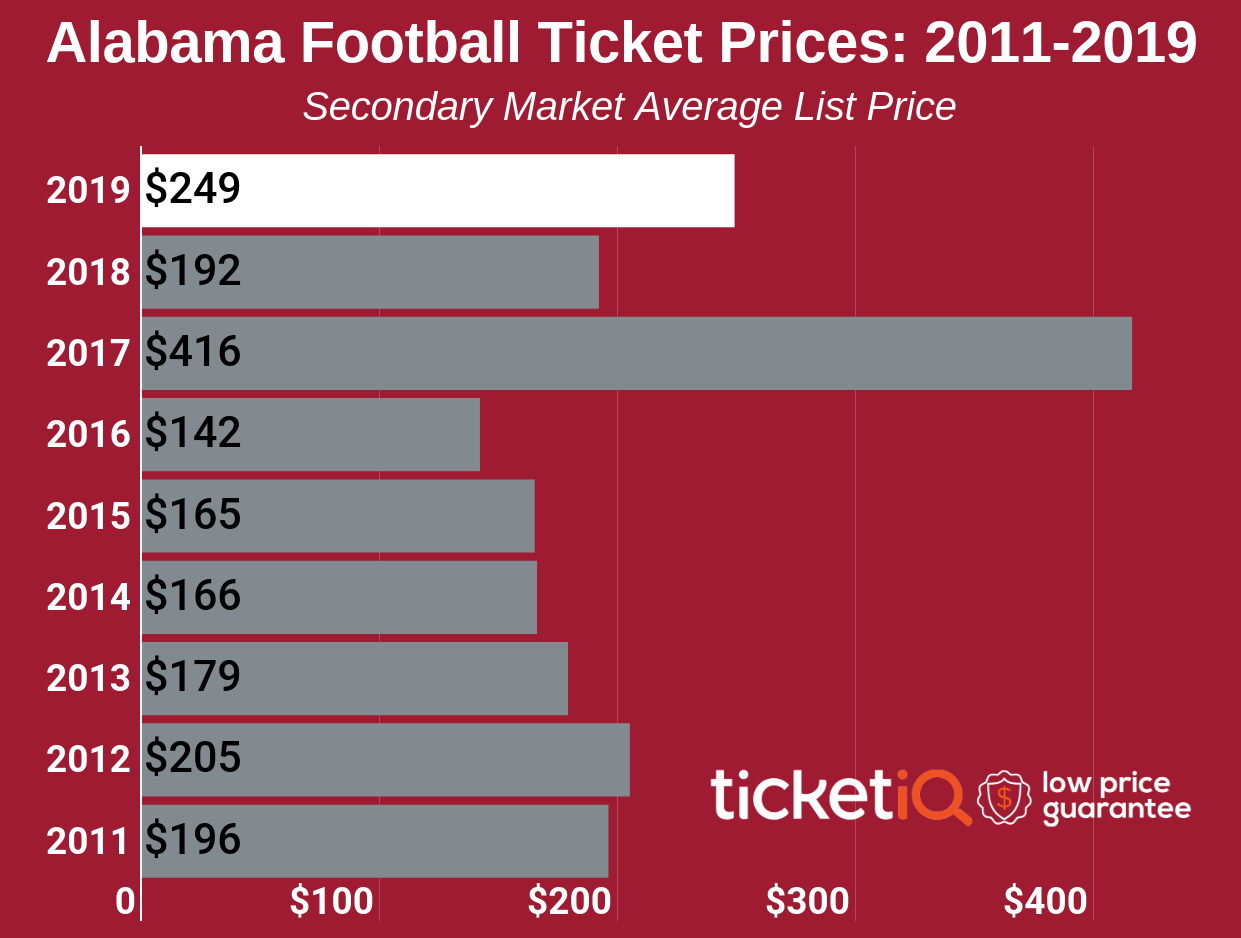 Alabama will play seven home games in 2019 – the current priciest is the November 9 game against SEC rival LSU, which is trending at $434 on the secondary market. For the best deal on 2019 Alabama football tickets, check TicketIQ for Low Price Guarantees to all games in Tuscaloosa and on the road. If you find the same ticket for on another major marketplace like Stubhub or Seatgeek, we’ll give you 200% of the difference in ticket credit for that purchase!

In addition to 'sold-out' tickets on the secondary market, for the first time in recent memory, tickets are available directly from Alabama for most games through their primary ticketing platform, Paciolan. For fans looking to get access to the highest demand-games, partial plans are the best option, with a 3 and 5-game package available.  5-game plans include any of the 2019 games and start at $585, The 5-game plan includes the option of either LSU and Tennessee in addition to lower-demand games. For 3-game plans, the highest-demand games to choose from are Ole Miss and Arkansas, and and prices start at $170 for that option.   Single-game tickets are available in the upper endzones in sections SS and NN for the lower-demand games, with face price tickets against New Mexico State, Southern Miss and Western Carolina starting at $45, with face prices for the Arkansas game starting at $75. 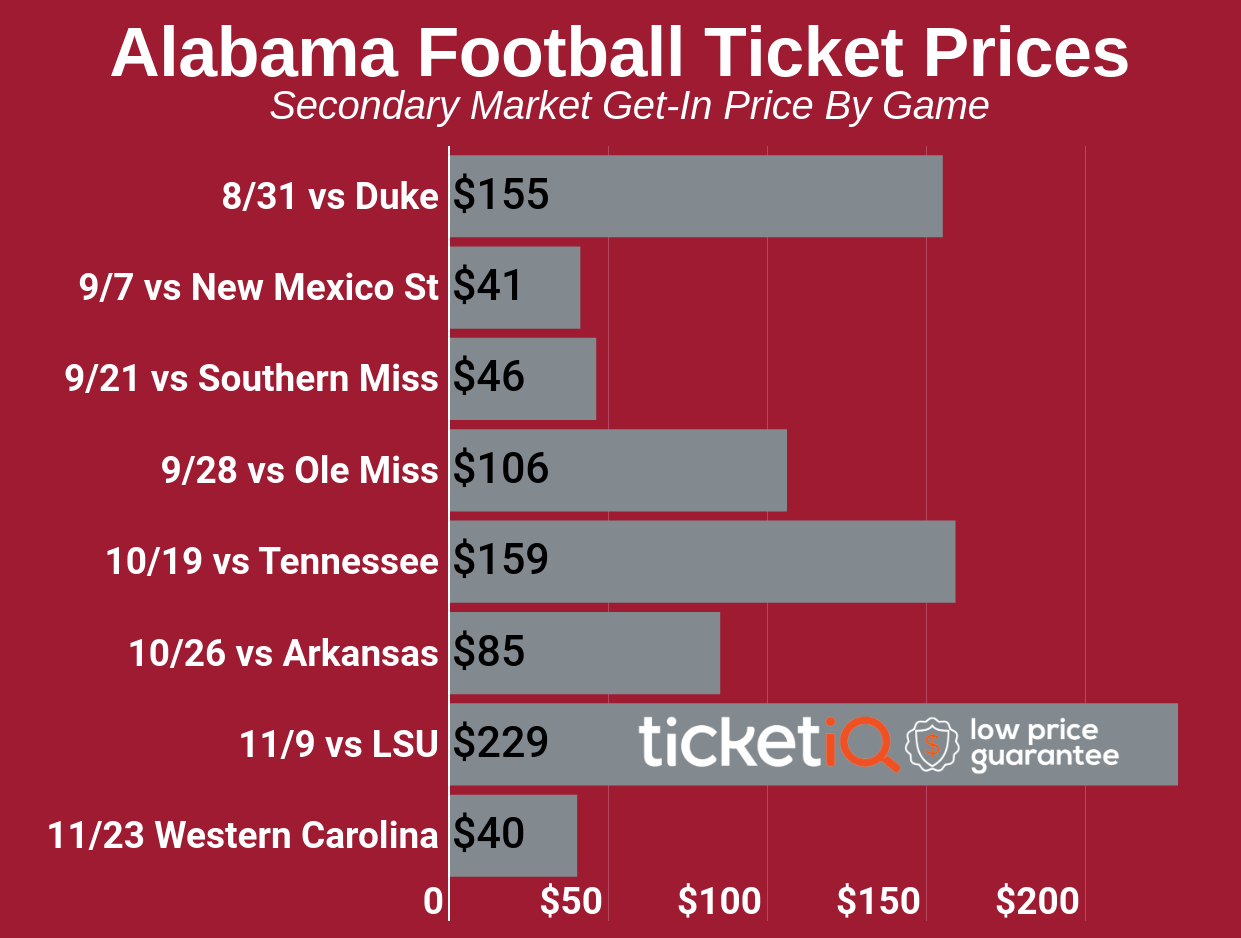 How Much Are Alabama Football Tickets

This game will mark the first meeting between these teams in history, and will be the first of two in the next three years. In September, New Mexico State agreed to a second game at Bryant-Denny Stadium in 2021. The Aggies are independent after being kicked out of the Sun Belt Conference after last season. Don’t expect much of a game here … New Mexico State is in it for the payout, and Alabama will use it for a warm-up before the SEC season starts.

These teams have played 42 times dating back to 1947, but the rivalry has been lopsided in Alabama’s favor throughout. The Crimson Tide has a 34-6-2 all-time series advantage, including winning the last six consecutive. The teams last played on September 13, 2014, and Alabama won, 52-12.

This rivalry dates to 1894, and Alabama holds a commanding 54-10-2 advantage, but that doesn’t make the game any less thrilling for fans. Among the highlights of the rivalry are the Archie Manning years and the 1964 Sugar Bowl – the only time the game was not played in Alabama or Mississippi. Alabama has won eight of the last 10 meetings, including beating Ole Miss, 62-7, on September 15, 2018 at Oxford. This game will be Alabama’s first SEC home game of the season.

Known as the “Third Saturday in October” game, this rivalry dates to 1901, and Tennessee and Alabama have played 101 times. The game is the second priciest ticket on the secondary market, and will, in fact, be played on the third Saturday in November this time around. Alabama has won the last 12 consecutive meetings, which is the longest streak of the series.

Though both teams are in the SEC, they’ve played only 27 times dating to 1962. Alabama has won the last 11 – 12, if you include the 2007 game it had to vacate. Last year, the Crimson Tide won, 65-31, on October 6 at Fayetteville. The teams  didn’t start playing regularly until 1992, when Arkansas joined the SEC. Prior to that, the teams met in the Sugar Bowl in 1980 and 1962, with Alabama winning both games. This is the third most expensive game in terms of average asking price.

The premiere game of the season, the Alabama-LSU game is the priciest on the secondary market. In fact, the get-in price for this game would be the third most expensive of the season, if it were an average asking price. The rivalry dates to 1895, but the teams didn’t start playing regularly until 1964. While Alabama holds an all-time series advantage, it’s not as lopsided (53-25-5) as other rivalries. Alabama has won the last eight, but prior to that, LSU had a five-game win streak between 2003-07. Alabama beat LSU, 29-0, on November 3, 2018 at Death Valley.

In the last 15 years, the Catamounts have been regular visitors to Bryant-Denny Stadium. This game will mark the fifth between the teams since 2005. Alabama has won all five games, but Western Carolina has had a few things to celebrate, including in 2014, when Western Carolina became the first team of the season to score on the opening drive against Alabama. The Crimson Tide ultimately won that game, 48-14. This game is the cheapest of all of Alabama’s home games on the secondary market.

For sold out seats, TicketIQ has Low Price Guarantees on all Alabama Crimson Tide games and concerts at the Bryant-Denny Stadium. That means that if you find a secondary market ticket for less on a site like StubHub or Vivid Seats, we’ll give you 200% of the difference in ticket credit. TicketIQ customers save up to 25% compared to other secondary sites. TicketIQ also provides access to unsold face-value tickets for all events at Bryant-Denny Stadium via Ticketmaster.

SS and NN- sections, rows and seats at Bryant-Denny Stadium

Skybox South and North Levels are luxury seating areas are located on the end zones of the stadium between the U1 and U4 Levels. President's Box and Ivory Club are located above the Lower Level Sidelines. U2/U3 Suites are located on the U2 and U3 Levels of the visitor's sideline. Golf Cart Shuttles run in the east spirals, Gate 29 and Gate 46.  ATMs at Bryant-Denny Stadium are located in Section NN-10, Gate 15 (Lower Level, West Side of Bryant Denny Stadium). The student sections at Bryant-Denny Field are located mostly in the south end zone and wrap around all the way from section A to section EE in the lower level, and also spans sections SS 2 through SS 6 in the upper level.

Single-game seat back rentals may be purchased at;

Family Restrooms with power outlets, chairs and shelving are located near;

WHERE CAN I FIND CHEAPEST TICKETS FOR BRYANT-DENNY STADIUM

The Alabama Crimson Tide have unsold face-value tickets available for most games, which can be purchased directly through Ticketmaster. Prices may be above or below prices on the secondary ticket market. Many Concerts also have unsold tickets. For Sold Out Seats and Events, TicketIQ has Low Price Guarantees on all events at Bryant-Denny Stadium. That means that if you find a secondary market ticket for less on a site like StubHub or Vivid Seats, we’ll give you 200% of the difference in ticket credit. TicketIQ customers save up to 25%.

Tickets for a TIDE game can be purchased either through Ticketmaster outlets or Bryant-Denny box office stadium. Also, the ability to order away game tickets is based on the number of TIDE PRIDE points (PDF). Having the ability to order tickets does not guarantee you will receive tickets. Plus, East Will Call will be open four (4) hours prior to the game, and will be located near Gate 32 on the East side of Bryant-Denny Stadium. Guests are requested to bring a valid photo ID in order to retrieve your tickets.