Sorry! There are currently no tickets available for ACC Football Championship.

Where To Buy ACC Championship Tickets

Primary market tickets to the December 7 Pac-12 Championship game at Bank Of American Stadium are available via Ticketmaster, and there are still plenty of options throughout the stadium.

On the secondary market TicketIQ will offer fans a Low Price Guarantee on all sold-out ACC Championship game tickets. That means that if you find a secondary market ticket for less on a site like StubHub or Vivid Sears, we’ll give you 200% of the difference in ticket credit. TicketIQ customers save up to 25%.

How Much Are ACC Championship Tickets

On the primary market, tickets start at $41.95 in the 500 sections -- whether on the corners or above the sidelines. There are also limited sections still available in the 300 Sections on the corners starting at $163.17, and along the sidelines starting at $233.10. All available 300-Section seats are Club Seats, meaning that patrons have access to lounges that include HDTVs and high-end food-and-beverage options. The seats closest to the action that are still available are in five 100-Level sections. Section 130 at the 30-yard line on the Coastal Division side is the best available, and seats in Row 16 start at $186.48. The closest 100-Level seats are in Row 8, Section 128 at the 10-yard line on the Coastal Division side. End-zone sections are sold out at all levels.
On the secondary market, the average asking price on the secondary market is $188, up from $164 in 2018. The game is the third priciest on the secondary market among the Power-5 Conferences, with $1,285 for the SEC Championship leading the pack.
The cheapest seat for the ACC Championship is currently $57, the cheapest of the five. fans can get in starting at $57, and there is a wider selection of seats, including end-zone seats on the 500, 200 and 100 levels and Club Seats in more than 15 sections on the 300 Level. Among the Club Seats still available with the TicketIQ Low Price Guarantee are seats in Club 314, Row 1 at the 40-yard line on the Clemson side for $595. Fans can get nearly as close on the Coastal Division side, with seats in Club 343, Row 2 starting at $344. Corner and end-zone seats on the 200 Level start at $105 and 100-Level end-zone seats start at $122, but fans can get seats in the first row in Sections 103, 122 and 123 starting at $174. Along the sidelines on the 100 Level, seats range in price from $181 in Lower 129, Row 10 to $546 in Lower 111, Row 1A at the 50-yard line on the Clemson side. 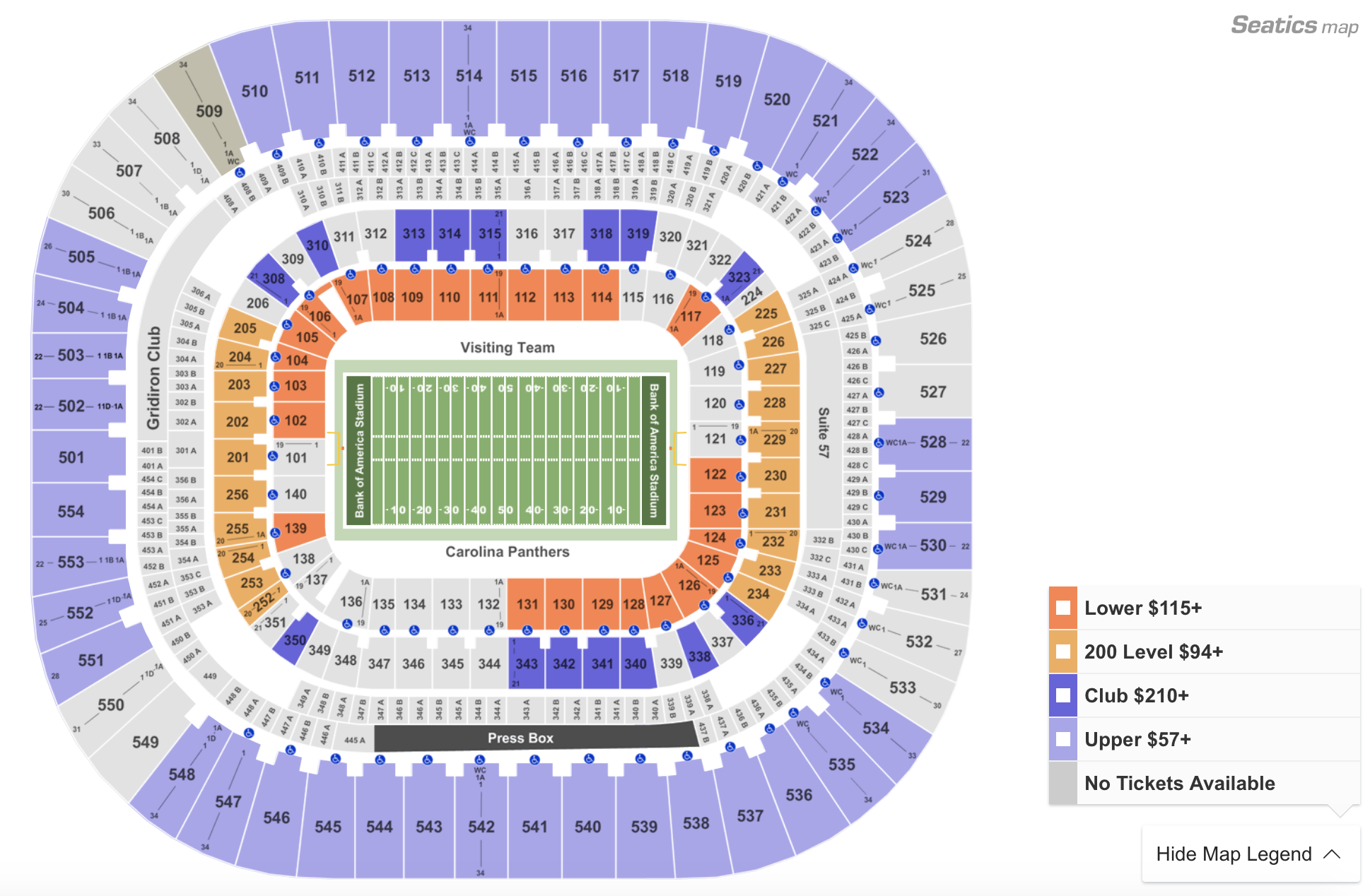 TicketIQ will also offer fans a Low Price Guarantee on all sold-out College Football playoff tickets. That means that if you find a secondary market ticket for less on a site like StubHub or Vivid Sears, we’ll give you 200% of the difference in ticket credit. TicketIQ customers save up to 25%.