How To Find Cheapest 2019 Warriors Finals Tickets At Oracle Arena 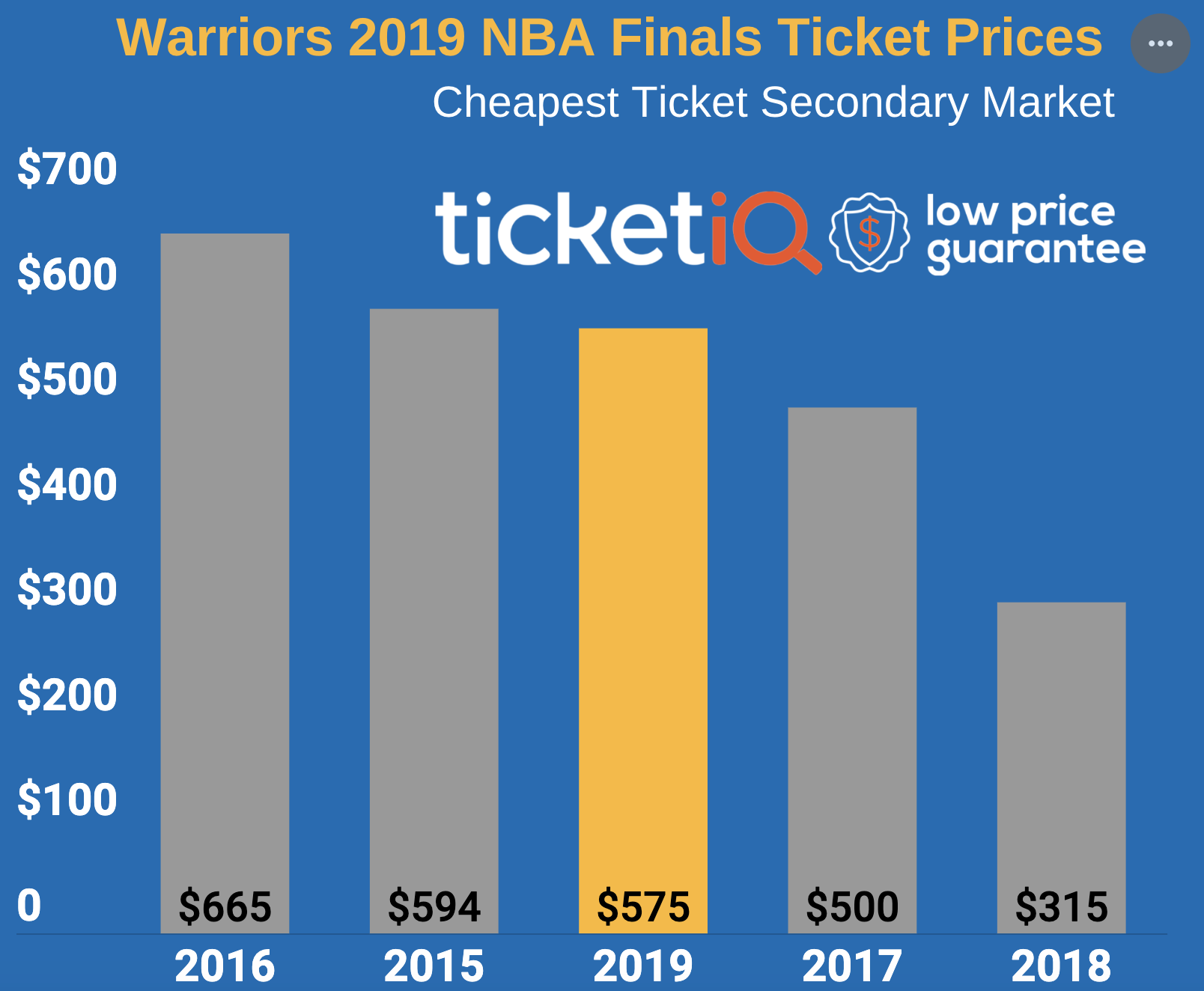 After avoiding elimination in Toronto in Game 5, the Warriors have forced a game 6 and the 2019 NBA finals will return to Oracle Arena for what will definitively be the Oakland arena's final game.  TicketIQ has Low Price Guarantees on Warriors NBA Finals tickets for games at Oracle Arena.

Raptors NBA Finals Ticket Prices at Scotiabank Are Most Expensive Ever 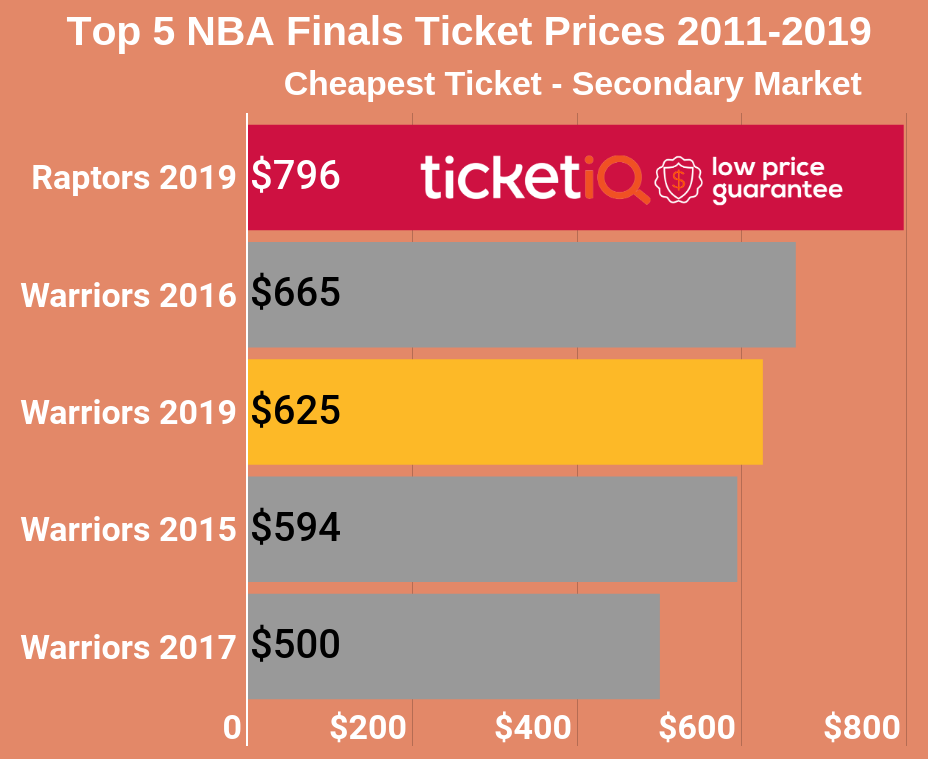 For fans looking to see the Raptors in their first-ever NBA finals, the cheapest NBA Finals tickets are going for around $2300 for a seat for Game 5 on June 10th. On the secondary market there are roughly 400-1,200 tickets available for each game. For games in Toronto the range is 400-900. Prices were high before all series but have gone even higher following the Raptors wins in games 3 & 4, and the Warriors win in game 5. The average price for that game 5 was almost $6000 per ticket and is the most expensive NBA Finals game we've ever tracked. If prices remain where they are right now, game 6 with be the third highest and game 7 with be the second highest. However, if the series does go back to Toronto we expect those prices to match or even surpass game 5.

Over the last decade, the next highest 'get-in' prices was $665 for the 2016 Warriors.  Even if prices come down as the result of more inventory hitting the market, it's likely that the Raptors would have the most expensive NBA finals tickets this decade. Regardless, it's worth checking Ticketmaster.ca to see if there are any tickets become available for sale. At current levels, this will be the most expensive NBA finals this decade.

Download the TicketIQ app for $20 off your first ticket purchase 📲 🎟️

After Game five win in the 2019 Eastern Conference finals of the NBA playoffs, the Toronto Raptors are one win from defeating Milwaukee Bucks and advancing to their first-ever NBA Finals. As a result prices on the secondary market are up 31% to witness the biggest night in Canadian basketball history, live at Scotiabank Arena in Toronto. For fans looking to be there Saturday night at 8:30 when the game tips off, the cheapest tickets are going for $452 as of this writing, up 5% since 9am this morning. It's likely that prices will continue to climb, with moderate amounts inventory available.

TicketIQ has Low Price Guarantees on Game 6 Raptors Bucks tickets. If you find the same ticket for less, we'll give you 200% of the difference in ticket credit. TicketIQ is also the leading source of ticket market data used by major news outlets, like CNBC, Business Insider, Fox and others. Enjoy the TicketIQ blog for most in-depth coverage of the NBA ticket market and use TicketIQ.com to save 15% compared to other major tickets sellers.

After a thrilling Game 7 win against the Sixers in the Conference Semi Finals, The Toronto Raptors have reached their first conference finals since 2015-16, when they lost to the Cavaliers in 2016.  For fans looking to see the team from the North reach their first-ever NBA finals, and the first ever for a Canadian team, ticket prices start at $185 for both games. For the first two games in Milwaukee, starting prices are very similar, with prices starting at $181 for the May 15th and 17th games at Fiserv Forum.  Lower level seats at Fiserv Forum are about cheaper than in Toronto, starting at $211.   Below are the five most expensive 'get-in' prices across all conference finals we've tracked.  For 2019, the Blazers lead the pack by a wide margin, but the Raptors have leapfrogged into the 4th most expensive, after their dramatic buzzer-beater series win.  Visit TicketIQ for Low Price Guarantees on all Raptors tickets at Scotiabank Arena in Toronto.  Game 3 - May 19th Scotiabank Arena, Toronto, ON - Tickets from $185  Below are Seatviews for the cheapest ticket in the 100s and 300s level for Game 3.     Game 4 - May 21st Scotiabank Arena, Toronto, ON - Tickets from $189 Below are Seatviews for the cheapest ticket on the 100s and 300s Center Level for Game 4.     📊🎟️🏀 For Game 7 of the Eastern Conference Semi-Finals, the Raptors host the 76ers in what is the second-most expensive Eastern Conference Semi-Finals this decade. Price start at $154 for tickets in section 31  Lower level tickets from $257. TicketIQ.com offers Low Price Guarantees on Raptors Tickets  TicketIQ offer Low Price Guarantees on all Raptors Playoff tickets for games at home and on the road.   With TicketIQ's Low Price Guarantee , if you find the same ticket for less (after fees) on any other major secondary site like StubHub or Seatgeek, TicketIQ will give you 200% of the difference toward the purchase. For TicketIQ Blog readers, you can also use  BLOG CODES: Raptors25 for $25 off over $200; Raptors50 for $50 over $400.  The second-best team in the NBA as of April 1, the Toronto Raptors have clinched a spot in the playoffs and were one of only two teams with 56 wins or more across the league. The Raptors will be heading to the postseason for the 11 th season since they joined the league as an expansion team in 1995.
Despite the great product on the court, the average asking price for Raptors tickets is down nearly 19% against last season on the secondary market, from $219 to $178, according to secondary ticket marketplace TicketIQ.com. For the regular season, Toronto has the 11 th most expensive ticket in the NBA. 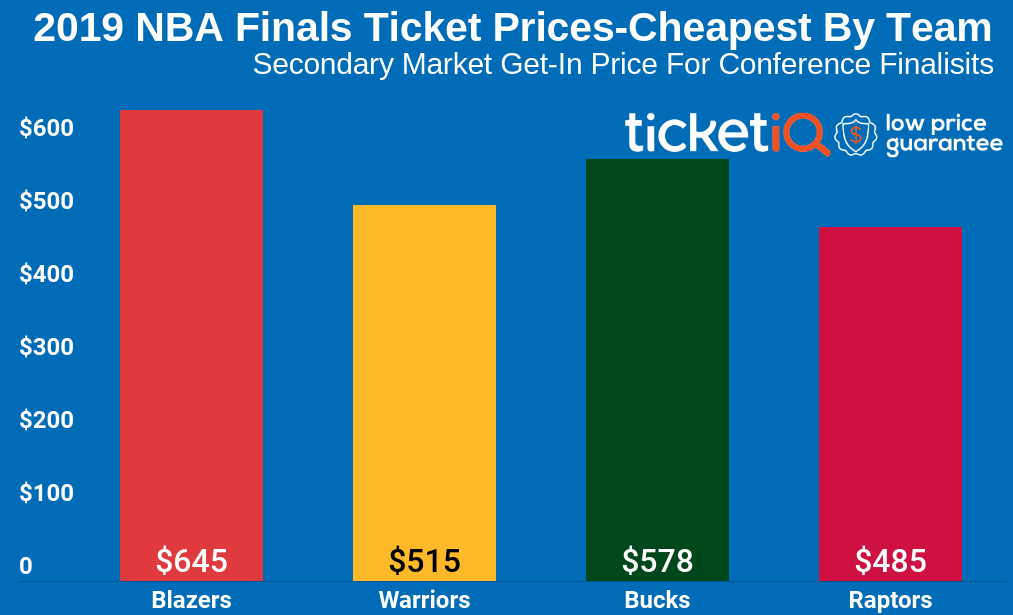 With the conference finals set, it's worth taking a look at how potential prices line up for the NBA Finals, which would start on May 30th. As the below infographic shows the Raptors would are the cheapest tickets today on the secondary market, while the Blazers are the most expensive tickets.

Also make sure to check Ticketmaster.com for NBA Playoff tickets available directly from the teams.

Visit TicketIQ.com for Low Price Guarantees on all NBA Tickets on the secondary ticket market. With TicketIQ's Low Price Guarantee, if you find the same ticket for less (after fees) on any other major secondary site like StubHub or Seatgeek, TicketIQ will give you 200% of the difference toward the purchase.

The Cavaliers are on a five-game win streak and second in the Eastern Conference, behind Boston, with about a third of the NBA season already gone. And after being regular fixtures in the NBA Finals for the last three years – they won in 2015-16, but lost to Golden State the other two times – it would be fair to say that a Cavs ticket is one of the most prized in the NBA. In fact, the average cost of a ticket so far this season is among the top ten most expensive.