Sorry! There are currently no tickets available for NBA All Star Game.

The NBA All-Star Game is set for Chicago for the first time this century. The February 16 game at United Center will mark the third time the city has hosted the event, and the first time since 1988.

Primary market tickets for the NBA All-Star game, set for Sunday, February 16 at Chicago’s United Center, are sold out on the primary market, but fans can buy tickets to many of the weekend’s events via NBAEvents or premium ticket packages via NBAPremium.

On the secondary market, TicketIQ offers a  Low Price Guarantee on all NBA All-Star Game & NBA All-Star Weekend tickets, which means that if you find a secondary market ticket for less on a site like StubHub or Vivid Seats we’ll give you 200% of the difference in ticket credit. TicketIQ customers save an average of 5%-20% compared to StubHub and Vivid Seats.

How Much Are 2020 NBA All-Star Game Tickets

Secondary market tickets to the NBA All-Star game have a current average asking price of $5,027, making them the priciest of the decade, when TicketIQ began tracking data. The cheapest ticket is trending at $1,199. Four times in the last 10 years, the average asking price has settled at $2,000 or more, including in 2019, which is the next priciest game behind this year. Fans paid an average of $2,865 at Charlotte's Spectrum Center. The cheapest All-Star game of the decade cost fans $1,020 at New Orleans’ Smoothie King Center in 2014. 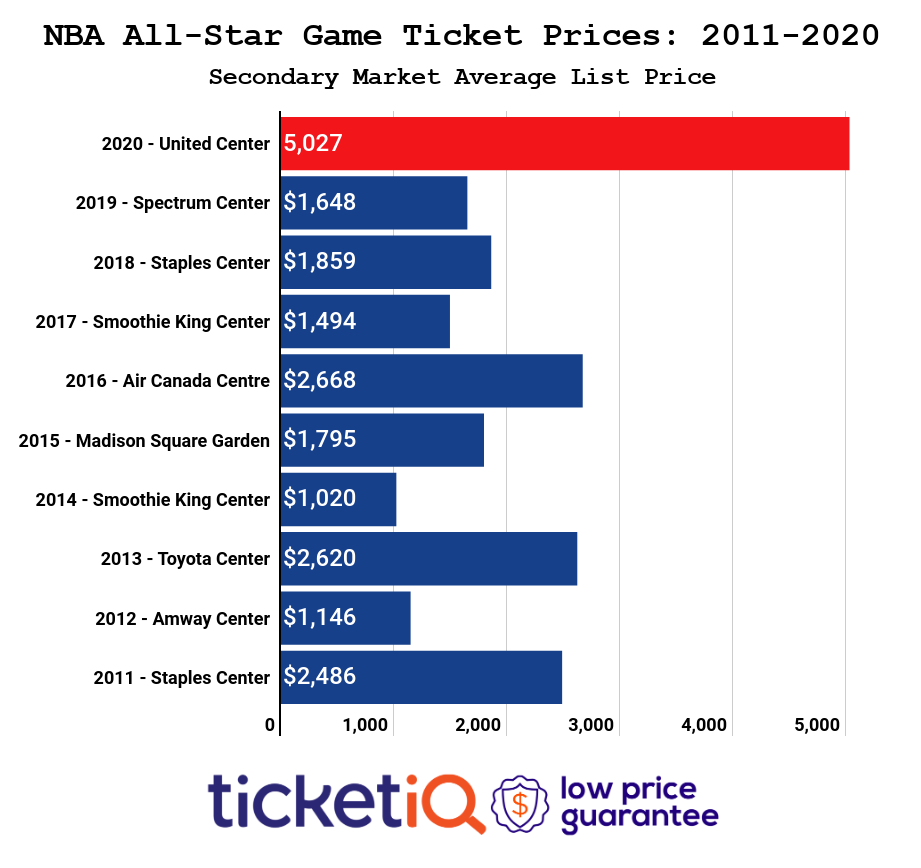 On the primary market, fans can buy a premium package that includes tickets to the Skills Challenge, Three-Point Contest, Slam Dunk Contest and the All-Star game for $2,599 via NBAPremium. The package also includes pre-game hospitality with current and former players, open bar, gourmet food stations and interactive experiences. The package does not include hotel and transportation, which can be added for an additional cost.

On the secondary market,TicketIQ shows seats available on all levels of the United Center. The cheapest seat at $1,199 is in Section 306, Row 16 on the corner. For fans wanting to be closer to the action, there are seats available in 10 floor sections, starting at $2,860 for seats in Section 106, Row 19 behind the baseline and with the TicketIQ Low Price Guarantee. The priciest floor seats still available are listed for $11,437 in Section 110, Row 4 on the sideline near the net.

There are multiple events leading up to the All-Star game. Below is a list of events and a look at ticket prices:

In a game that combines celebrity with sport, fans can watch movie and television stars, former NBA players and WNBA players in an entertaining match-up. Primary market seats for this game are sold out, but fans can shop the secondary market, where seats start at $115 in Upper 202, Row S.

This game pits the NBA’s best rookies and sophomores. Seats are available via Ticketmaster starting at $65 on the 300 Level and go up to $400 for a seat along the baseline in either Section 113 or 122. On the secondary market, seats start at $59 in Level 307 on the corner.

For an up-close look at the players, fans can buy a ticket to practice and get a glimpse of the best players in the league. Tickets are sold out on the primary market, but fans can get in via the secondary market, with tickets starting at $58 on the 200 Level.