With the NBA preseason tipping off on December 11, basketball fans are very excited to see the league return just two months after crowning the Los Angeles Lakers the 2019-20 champions. The preseason will continue until December 19, and then the first half of the regular season will be played from December 22 to March 4.

The schedule for the second half of the season has yet to be released. The second half will span from March 11 to May 16, and the NBA’s first official play-in tournament will be from May 18 to 21. The 2020-21 NBA champion will be crowned at the conclusion of the playoffs, which will be played from May 22 to July 22.

At the beginning of the season, the Atlanta Hawks, Memphis Grizzlies, Oklahoma City Thunder, and Utah Jazz have announced that they will be hosting fans.

Secondary market tickets will also be available, and TicketIQ will have Fee-Free NBA tickets with a Refund Guarantee, which states that in the event an event is canceled or deemed unfit for fans to attend, TicketIQ will refund ticket buyers in as soon as 15 days. That means that you can buy from TicketIQ worry-free.

Which NBA Teams Are Hosting Fans

UPDATE (6/12): Shams Charania is reporting the expected dates for the restart of the NBA season:

On June 4th, the NBA agreed on a 22-Team Tournament to restart the regular season. The tournament will take place in Orlando at the ESPN Wide World of Sports, a a 220-acre basketball, soccer, volleyball, lacrosse, baseball and competitive cheer complex. Fans, unfortunately, will not be allowed in the area.
Read More →

For sold out seats TicketIQ has Low Price Guarantees on all events at FedExForum for Memphis Tigers men's basketball, the Memphis Grizzlies, and Concerts. That means that if you find a secondary market ticket for less on a site like StubHub or Vivid Seats, we’ll give you 200% of the difference in ticket credit. TicketIQ customers save up to 25% compared to other secondary sites. TicketIQ also provides access to unsold face-value tickets for all events at FedExForum  via Ticketmaster. 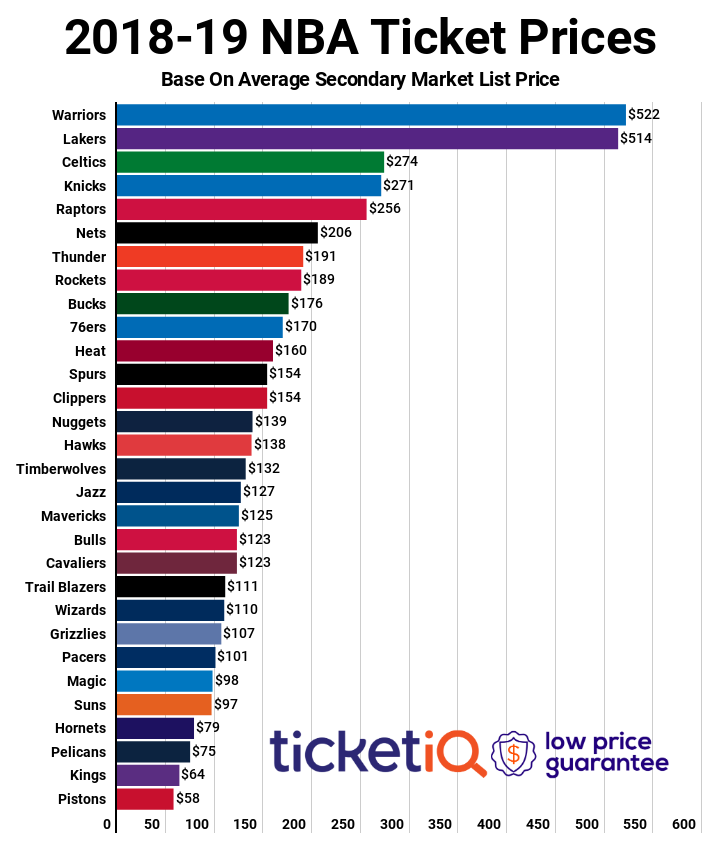 Toronto Raptors: The biggest mover among teams that had a price increase between the start of the season and the midway point, Raptors tickets rose nearly 44% from $178 to $256. In terms of overall rankings, Toronto moved from the No. 10 most expensive ticket to No. 5.

Boston Celtics: The Celtics had a first-half increase of almost 22%, moving them from having the No. 5 most priciest ticket to No. 3, behind only the Golden State Warriors and Los Angeles Lakers, the only two teams with ticket averages higher than $500. Boston tickets cost an average of $274 now, versus $225 at the start of the season.

Chicago Bulls: The Bulls are first in the NBA … but in a category they probably don’t want to lead. The average asking price for a Chicago ticket dropped just over 50% in the first half, from $247 to $123. The Bulls started the season with the fourth priciest ticket in the league and, but dropped 15 spots and were ranked No. 19 by the midway point.

Sacramento Kings: Not far behind the Bulls, Sacramento watched its average asking price plummet by just under 50% through the first half. Ranked No. 18 at the start of the season with a $127 average asking price, a Kings ticket is now averaging $64, making it the second cheapest in the league.