The St. Louis Cardinals promotional game schedule for 2020 has such a large number of unique giveaways for fans this season. The highlights of the promotional schedule are the several bobblehead and mystery giveaway days.

The Cardinals are coming off an National Championship Series appearance in the 2019 playoffs, which snapped their three-year streak in which they missed the playoffs. St. Louis opens the season in Cincinnati and Milwaukee before returning home to face the Baltimore Orioles at Busch Stadium, and the 2020 Cardinals Magnet Schedule will be given away to all fans ages 21 and older at the April 2 contest.

The second home game of the Cardinals season is on Saturday, April 4, and it is Mystery Hall of Fame Opening Day Car Parade bobblehead night. The first 30,000 fans ages 16 and older will receive a Stan Musial, Jack Buck, or Tony La Russa bobblehead. To finish the first homestand of the season, the first 30,000 fans ages 16 and older will receive an Adult Replica 1944 Jersey on Sunday, April 5. In addition, the Sunday game is a Kids Ticket Voucher day: all kids ages 15 and younger will receive one free ticket voucher valid for select Cardinals regular season home games this season.

Not only are there kids and adults giveaways for the Sunday, April 5 game, but there is also the Prairie Farms Ice Cream Sunday event that day. For every Sunday home Cardinals game in 2020, there will be games, prizes, and free Prairie Farms frozen treats while supplies last in the Ford Plaza starting two hours prior to the game.

On select Sundays, there will also be Kids Run the Bases days: April 26, May 31, June 21, July 5, August 16, and September 13. The April 26 afternoon game against the Miami Marlins is also a Kids Ticket Voucher day and all kids get a Rawlings Kids Glove. The first 30,000 fans ages 16 and older will receive an MLB Network Tote Bag that day as well. Sunday, May 10 against the New York Mets is not a Kids Run the Bases Day, but is a Kids Ticket Voucher day for all kids, and Cardinals Crossbody Purses will be given away to the first 30,000 fans ages 16 and older.

The Cardinals also offer a monthly t-shirt giveaway to the first 20,000 fans ages 16 and older at select games. The T-Shirt of the Month promotional days are the following: April 6, May 19, June 16, July 1, August 12, and September 1.

TicketIQ is a ticket market place with access to Low Price Guarantees on all MLB tickets. If you find the same ticket for less, we'll give you 200% of the difference in ticket credit. TicketIQ is also the leading source of ticket market data used by major news outlets, like CNBC, Business, Insider, Fox and others. Enjoy the TicketIQ blog for most in-depth coverage of the Cardinals ticket market and use TicketIQ.com to save 15% compared to other major tickets sellers.

The Cardinals advanced to the NLCS with a dramatic series win against the Braves to advance to their 5th league divisional series this decade.  On the secondary ticket market, it's the most expensive LCS in St. Louis since 2010, with the average price of tickets on the secondary market going for $374. There are also a handful of unsold face value tickets still available directly from the Cardinals.

On the secondary market, TicketIQ has Low Price Guarantees on all sold out Cardinals postseason tickets and on all sold out MLB playoff tickets and World Series tickets. That means that if you find a secondary market ticket for less on a site like StubHub or Vivid Seats, we’ll give you 200% of the difference in ticket credit. TicketIQ customers save an average of 5%-20% compared to StubHub and Vivid Seats.

How Much Are St. Louis Cardinals Playoff Tickets

On the secondary market, the Cardinals have an average price of $332 for the NLCS, which is the highest in the National League. The average price for game 1 of the NLCS is $245, while game 2 jumps to $332 per ticket. Game 6 is the most expensive game in St. Louis and is averaging $484 and game 7 is averaging $427.

Click links below for Low Price Guarantees from TicketIQ:

Below is a look at Cardinals NLCS ticket prices this decade: 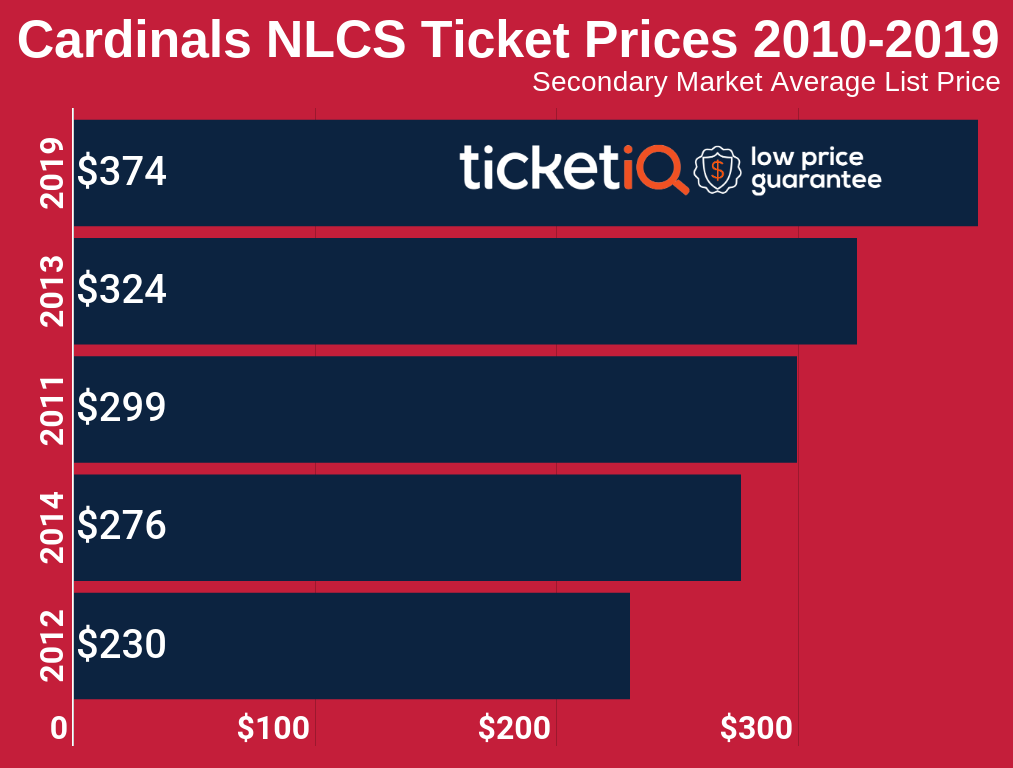 What Are Dates For Cardinals Playoffs at Busch Stadium