Where To Buy 2020 Cincinnati Reds Tickets?

The Cincinnati Reds single-game tickets went on sale on the primary market on Friday, Feb. 21, excluding Opening Day, March 26 against the St. Louis Cardinals. Information on season tickets and the team’s Bronze membership for 13 games is available directly from the team.

How Much Are 2020 Cincinnati Reds Tickets?

On the secondary market, most tickets for Reds home games are available for $20 or less. One of the priciest games outside the home opener is the Sunday, June 7 game against the Chicago Cubs. The cheapest ticket right now with the TicketIQ Low Price Guarantee is $50 for the Kroger Bleachers Section 405, Row A or $138 for Infield Box Section 109, Row PP for $138. That June 4-7 series against the Cubs is the priciest of the season.

The least expensive series is the Aug. 31-Sept. 2 series against the Baltimore Orioles.

Overall, the average asking price for a Cincinnati Reds ticket on the secondary market is $55 for the 2020 season, a 12.7% increase over 2019. The highest average asking price for the Reds was $70 in 2017. The cheapest average was in 2014 at $37. The Reds have one of the lowest average ticket prices in Major League Baseball at $55 and with a projected win total of 85 games is an average cost per victory of $0.64. As the site of the traditional Opening Day for the MLB season, those tickets average $118. The priciest seat in the league is $167 for a Boston Red Sox home game. 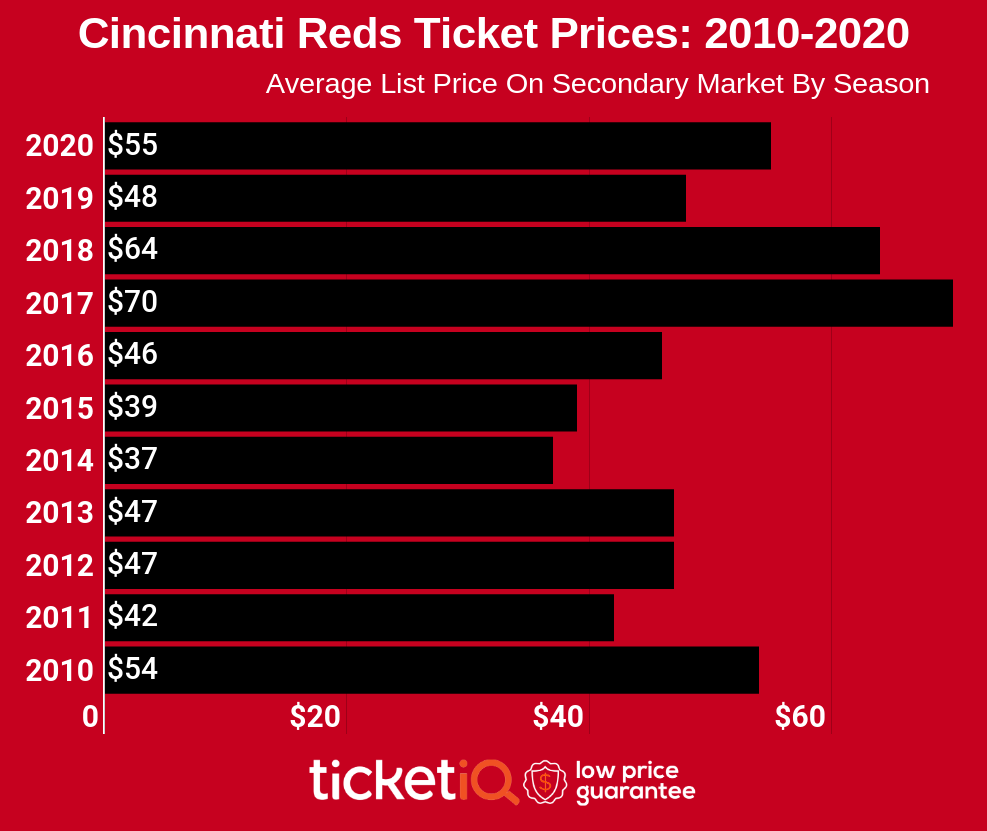 On the primary market, fans can request information about season tickets through the team. Season tickets are at a discounted rate as compared to single-game tickets. Season-ticket holders also get benefits including discounts on concessions and merchandise, Opening Day tickets, access to presale, early entry and express entrances and RedsFest tickets.

Half season and 13-game ticket plans are available via the Reds.

The Reds and Great American Ballpark encourage fans to use the digital ticketing option via the MLB Ballpark app. Fans can view, transfer, buy or sell tickets using the app.