Where To Buy 2020 Masters Tickets

TicketIQ offers fans a Low Price Guarantee for all sold out Masters tickets as well as all sold out Golf events for all races on the 2019 schedule. That means that if you find a secondary market ticket for less on a site like StubHub or Vivid Seats, we’ll give you 200% of the difference in ticket credit. In our efforts to continue to provide our customers with the best deals, we’ve removed all fees.TicketIQ now shows you the full ticket price from the start of your search. TicketIQ customers save an average of 5%-20% compared to StubHub and Vivid Seats.

How Much Are 2020 Master Tickets

The cheapest Masters of the last 10 years was in 2016 when a weekly badge could be had for $1,768 and the get-in price was $260. That year, Jordan Spieth had an epic collapse on the back nine on Sunday, paving the way for Danny Willett to win his first and only major. 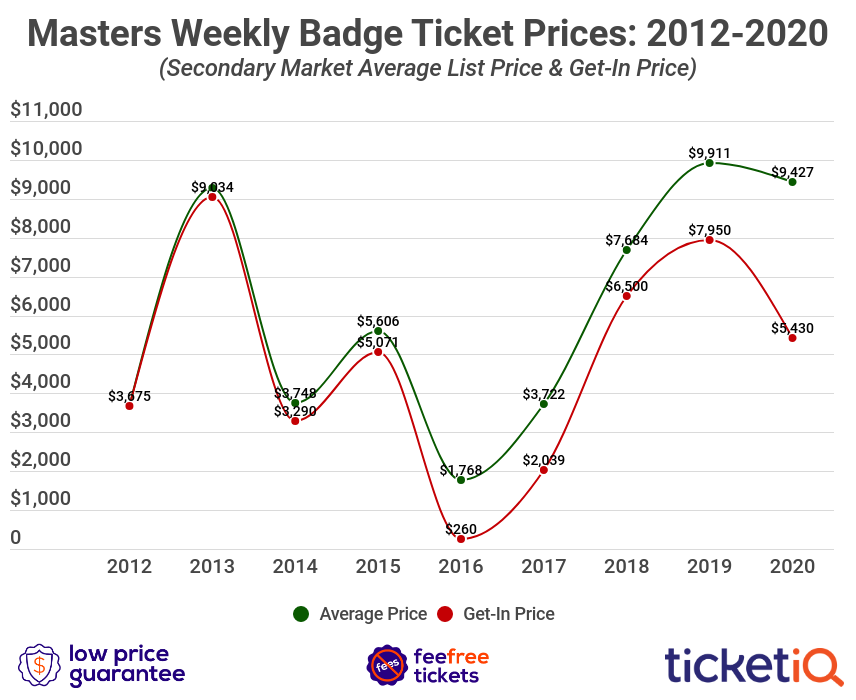 There’s nothing cheap about a day pass to the Masters, but the best deal of the week is Saturday and Sunday when the get-in price is $1,975. Saturday is traditionally the cheapest day of any golf tournament, as the cut has already been made.

For comparison, the most expensive average asking price for a day pass of the last decade cost fans an average of $3,616 to see the first round in 2016. The cheapest was a Thursday day pass in 2014, which cost fans $1,017.

As you can see below, the average price is down just over 4%, however get-in prices for this year's tournament are down over 30% and are at a 5-year low. 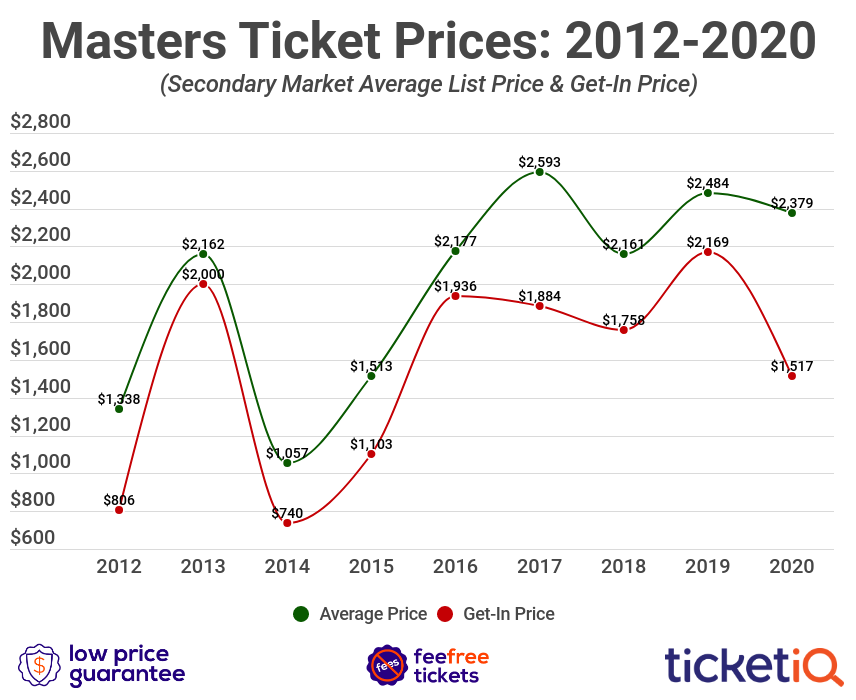 The priciest practice day on the secondary market is Wednesday, for which fans will pay more than double and nearly double the price of Monday and Tuesday. Why? The Masters' famed par-3 tournament, when those in the Masters' field and past champions play the club’s nine-hole par-3 course. Prior to 2017, the par-3 tournament was open to anyone Augusta National wanted to invite. No player has ever won the par-3 tournament and gone on to win the Masters in the same week, though several past champions, including Arnold Palmer and Ben Crenshaw, won both during their careers.

TicketIQ is committed to the cheapest tickets possible, and we make much less on sold out tickets compared to other major marketplaces like StubHub and Vivid. That means ticket buyers save from up to 25 on TicketIQ on sports, music and theater. We're able to do this because we also work with teams, venues, and other ticket owners, to help them sell tickets at face price, directly to consumers like you, through Ticketmaster, Seatgeek and other primary ticketing platforms.