Sorry! There are currently no tickets available for The Chainsmokers.

D.J. and production duo The Chainsmokers will embark on their second career tour, the ‘World War Joy Tour’ on September 25 in Cincinnati, Ohio. The tour includes three stops in Canada, including the last show on December 6 in Vancouver, British Columbia. The tour doesn’t stop anywhere twice, and has two other Canada dates – October 8 in Toronto, Ontario and October 9 in Montreal, Quebec.

Where To Buy The Chainsmokers Tickets

The pair will make 39 stops across the U.S. and Canada, and primary market tickets are on sale via Ticketmaster. Most of the higher-interest shows are 40% sold out or more, and the September 28 show at Connecticut’s Mohegan Sun and the October 9 date in Montreal are 95% sold out.

The Chainsmokers will be joined by 5 Seconds of Summer and Lennon Stella on the tour.

TicketIQ will offer fans a Low Price Guarantee for all sold out seats and shows for The Chainsmokers tickets for the ‘World War Joy Tour" and all sold out concert tickets this year. That means that if you find a secondary market ticket for less on a site like Stubhub or Seatgeek, we’ll give you 200% of the difference in ticket credit. TicketIQ customers save an average of 5%-20% over Stubhub or Seatgeek.

How Much Are The Chainsmokers Tickets

For the Mohegan Sun show, only single seats or “This Feeling Soundcheck Packages” are still available. Single seats start at $69 in the upper level in the 100 sections, but fans can get closer with the ‘Soundcheck’ package, which includes seating in the first 10 rows, an invite to the preshow soundcheck, including a question-and-answer period with the artists, and dedicated VIP entry. Packages are available at most venues, and start as low as $150 for the higher-interest shows.

Fans wanting to sit together should check out the secondary market, as TicketIQ shows seats in the 100 Sections starting at $106, and fans can buy seats together.

For the Montreal show, the only primary market seats available are Official Platinum, which is dynamic pricing and could change. The cheapest seat to that show on the primary market starts at $190 for a seat in Section 124. Fans should shop around, as similar seats in Section 123 start at $119 on the secondary market.

The cheapest show on the secondary market is the October 29 show in New Orleans, for which seats in the upper levels start at $11. Fans can take advantage of the low demand and treat themselves to seats in Floor B for just $159.

Most The Chainsmokers tour tickets start at $30 or higher, but there are eight shows for which the cheapest tickets on the secondary market starts at less than $20.

Below is a look at the higher-interest shows with the cheapest ticket on the secondary market starting at $40 or more: 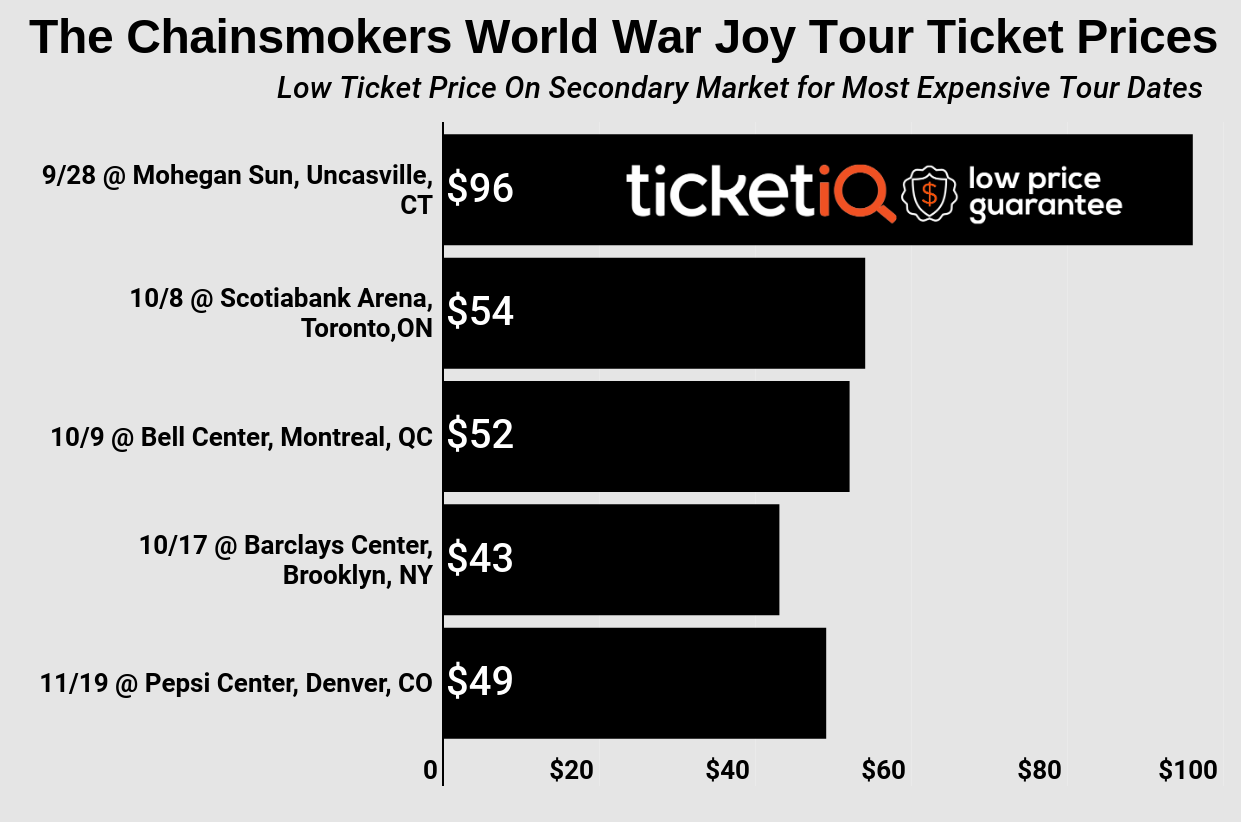